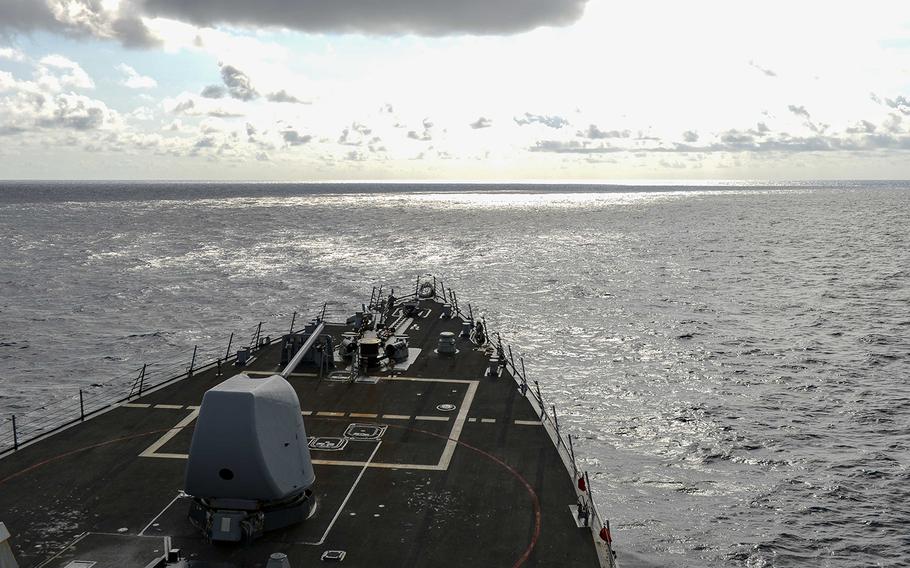 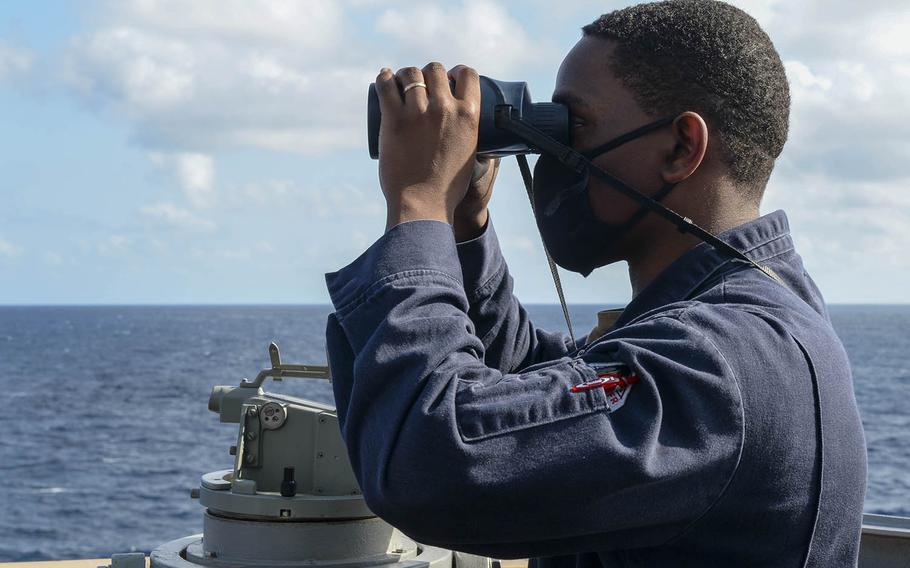 Ensign Ryan Simpson, of Baltimore, watches from the bridge wing of the USS Russell as the guided-missile destroyer steams through the South China Sea, Wednesday, Feb. 17, 2021. (Wade Costin/U.S. Navy)

The USS Russell conducted a freedom-of-navigation operation in the South China Sea on Wednesday, challenging the “unlawful restrictions on innocent passage” imposed by China, Vietnam and Taiwan, the Navy’s 7th Fleet said.

The guided-missile destroyer steamed past the Spratlys, a chain of more than 100 small islands and reefs, according to a statement from 7th Fleet spokesman Lt. Joe Keiley on Wednesday.

Six surrounding nations, including China, Vietnam and the Philippines, claim all or part of the Spratlys, a commercial fishing zone with potential oil and natural gas deposits. The islands are west of the Philippine island of Palawan.

China has improved seven of the Spratly features with airstrips, helipads, barracks and other facilities, including anti-ship cruise missiles, according to the CIA The World Factbook online.

The Spratlys are near commercial shipping lanes that carry 80% percent of world trade by volume, according to the United Nations Conference on Trade and Development.

China, Vietnam and Taiwan require either permission or advance notice before a foreign military vessel engages in innocent passage through the area, a practice the U.S. holds is contrary to international law.

“The United States challenges excessive maritime claims around the world regardless of the identity of the claimant,” Keiley wrote. “Unlawful and sweeping maritime claims in the South China Sea pose a serious threat to the freedom of the sea, including freedoms of navigation and overflight, free trade and unimpeded commerce, and freedom of economic opportunity for South China Sea littoral nations.”

The 1982 United Nations Law of the Sea Convention stipulates that ships of any state, including warships, have the right to innocent passage through territorial seas, Keiley said.

The Russell’s trip past the Spratlys is the Navy’s second freedom-of-navigation exercise in the South China Sea this month. A day after steaming through the Taiwan Strait on Feb. 4, the guided-missile destroyer USS John S. McCain sailed near the Parcel Islands, south of the Chinese island of Hainan. Possession of that small chain is also in dispute.