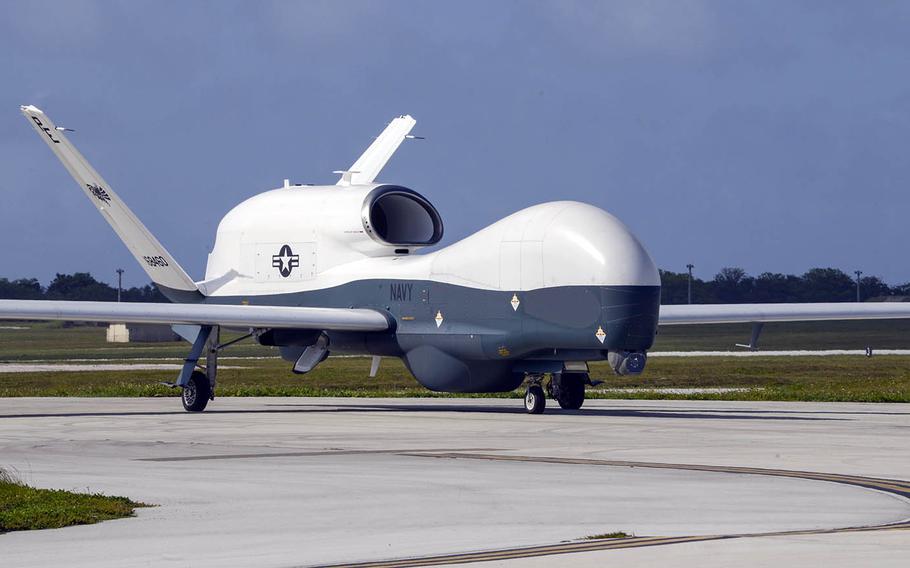 YOKOTA AIR BASE, Japan — Navy MQ-4C Tritons will join Air Force RQ-4 Global Hawk surveillance drones on a temporary deployment to Japan for the first time this summer, according to Japan’s Defense Ministry.

The Guam-based drones will arrive in Japan after mid-May in “the midst of an increasingly severe security environment surrounding the country,” the ministry said in an undated message on its website.

The deployment is “critical to enhance [intelligence surveillance and reconnaissance] activities by both countries,” the message said.

U.S. forces have temporarily deployed Guam-based Global Hawks to Japan since 2014. The Tritons, which arrived on Guam in January 2020, are similar to Global Hawks but specialized for maritime surveillance.

“This deployment is intended to demonstrate U.S. commitment to Japan’s Defense and will be beneficial to security of Japan by strengthening the ability of maritime surveillance around Japan, given the increasingly active maritime activities by surrounding countries,” the ministry’s message said.

U.S. Forces Japan and the 7th Fleet did not provide answers to questions sent by email Monday about the Tritons coming to Japan.

“Pacific Air Forces will rotate RQ-4 Global Hawks to Yokota AB, Japan, from Andersen AFB, Guam, due to the more favorable weather in the Kanto Region during typhoon season and to maximize their ability to support theater-wide operations,” she said. “This move ensures persistent reconnaissance in a region where challenges to a free and open Indo-Pacific continue to increase.”

Valencia declined, citing operational security, to answer questions about the number of aircraft or personnel who would deploy with the drones.

According to the aircraft’s manufacturer, Northrop Grumman, the Global Hawk flies at 60,000 feet and has a line of sight to targets more than 340 miles away.

The exact range of the aircraft’s cameras and sensors is classified, but a Global Hawk flying near the Korean Demilitarized Zone could see well beyond the Yalu River that marks North Korea’s border with China.

Northrop Grumman says the Triton, which it also makes, can detect, track, classify and identify ships at sea, and can stay airborne for more than 24 hours.