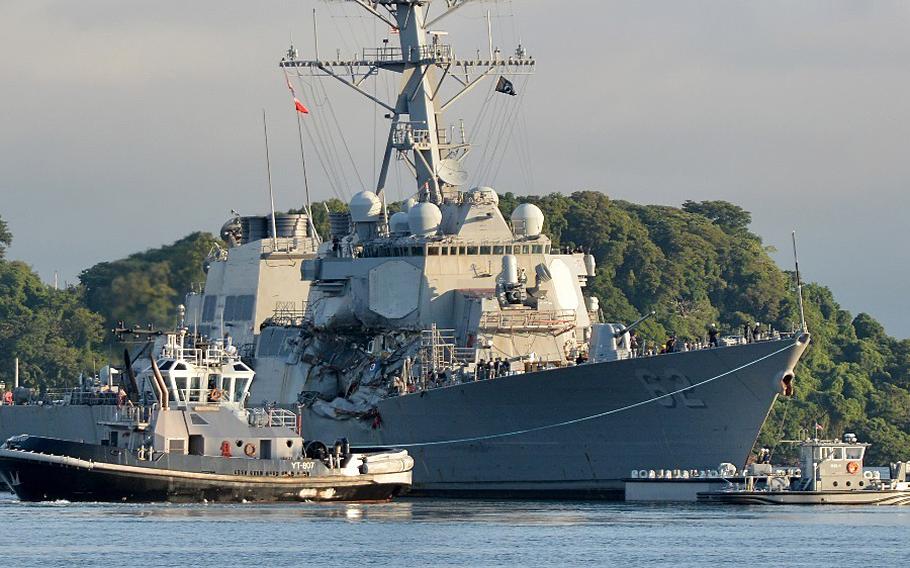 YOKOSUKA NAVAL BASE, Japan – The Navy relieved the USS Fitzgerald’s two senior officers and a senior enlisted sailor Friday and held a slew of officer and enlisted watch standers accountable for the deadly June 17 collision between the destroyer and a merchant ship.

Vice Adm. Joseph Aucoin, 7th Fleet commander, relieved commanding officer Cmdr. Bryce Benson due to a loss of confidence in his ability to lead, stating that Benson had “absolute accountability for the safe navigation of Fitzgerald,” according to a statement issued by the fleet.

The “avoidable” collision was caused by “flawed watch stander teamwork and inadequate leadership” as well as “poor seamanship” from both the Fitzgerald and the Philippine-flagged ACX Crystal, which collided with the destroyer about 64 miles southwest of Yokosuka, the statement added. The collision killed seven sailors, injured three -- including Benson -- and damaged both ships.

Benson was relieved after a thorough review of the facts and circumstances leading up to the accident, the statement said. He will be reassigned to Naval District Washington at the Washington Navy Yard, where he will have access to area medical facilities.

The destroyer’s executive officer, Cmdr. Sean Babbitt, and command master chief, Master Chief Petty Officer Brice Baldwin, were also blamed for contributing to the accident. The statement said their actions “contributed to the lack of watch stander preparedness and readiness.”

Several junior officers who had served as watch standers for the bridge and combat-information center during the accident were relieved of their duties due to “poor seamanship and flawed teamwork,” said the statement, which added that further administrative action was taken against watch standers from both watch teams.

Cmdr. Garrett Miller will take over as the Fitzgerald’s commanding officer sometime this month, the statement said, relieving Cmdr. John "Jack" Fay, who has been serving as acting commander.

The Fitzgerald, which was placed in dry dock at Yokosuka on July 11, will be taken to the mainland United States on a heavy lift ship to undergo repairs in the fall, the service announced this week.

A Navy investigation into the incident released Thursday shows that the 1:30 a.m. collision blasted a 17-by-13-foot hole into the side of the ship. One of the Fitzgerald’s berthings, where 35 sailors were sleeping, flooded within 90 seconds.

“The crew of the Fitzgerald fought hard in the dead of the night to save their ship,” Williams wrote. “Ultimately, those damage control efforts and restoration processes succeeded in safely bringing Fitzgerald into port under her own power.