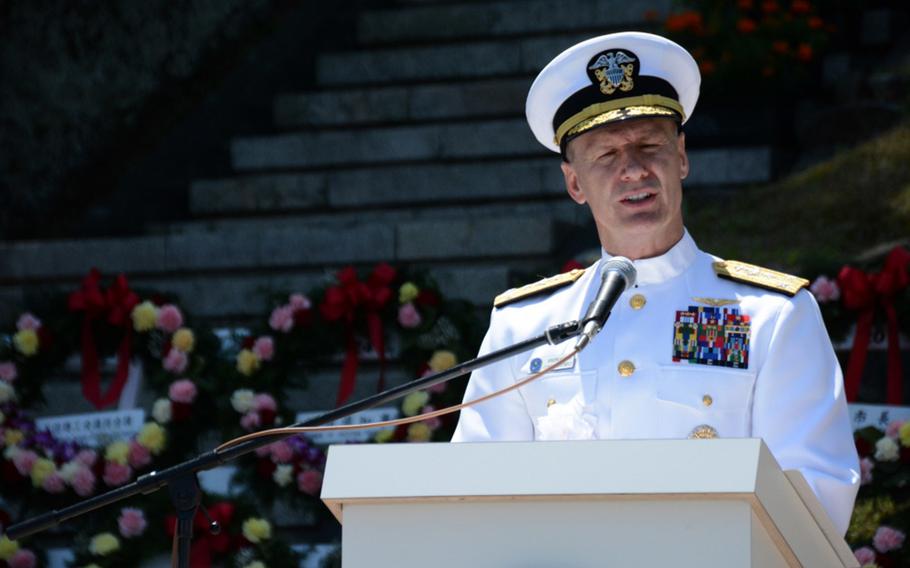 YOKOSUKA NAVAL BASE, Japan — The head of the Navy’s 7th Fleet was relieved of command Wednesday in the wake of a string of accidents across the Pacific involving Navy ships.

Vice Adm. Joseph Aucoin lost his job “due to a loss of confidence in his ability to command,” said a Navy statement issued Wednesday. The news comes just days after the USS John S. McCain collided with a Liberian-flagged oil tanker east of Singapore, injuring five sailors and leaving 10 missing.

Rear Adm. Phillip Sawyer, who was slated to take over the Yokosuka-based 7th Fleet during a change-of-command ceremony on Sept. 7, will assume command “immediately,” the statement said. Sawyer, who is coming off a tour as Pacific Fleet’s deputy commander, previously led the fleet’s submarine forces.

Aucoin planned to retire after his tenure was up.

The search for the missing McCain sailors continued Wednesday. Navy and Marine Corps divers were checking flooded compartments aboard the ship and at sea, search efforts were focused on an area east of the straits of Malacca and Singapore, but expanding to encompass a greater area "as time goes on," according to a statement from the 7th Fleet.

Singapore's government said the search area more than doubled Wednesday to about 2,120 square miles, according to The Associated Press, with aircraft and vessels deployed by the U.S., Singapore, Malaysia, Indonesia and Australia.

Adm. Scott Swift, Pacific Fleet commander, told reporters Tuesday evening in Singapore that search-and-rescue efforts have turned up a number of bodies on the McCain.

Swift also said he would be traveling Wednesday to Yokosuka, where the 7th Fleet is based.

The McCain, which is homeported at Yokosuka, was traveling to Singapore for a routine port visit early Monday when it collided with the Liberian-flagged Alnic MC oil tanker.

Swift said Navy and Marine Corps divers discovered remains while searching sealed compartments in damaged areas of the ship. The Malaysian navy also discovered a body that could be one of the missing sailors.

The McCain is the fourth Navy ship to be involved in a serious accident in the Pacific this year. In January, the USS Antietam ran aground and spilled roughly 1,100 gallons of hydraulic fluid into Tokyo Bay. In May, the USS Lake Champlain collided with a South Korean fishing boat while operating off the east coast of the divided peninsula. In June, a deadly collision between the USS Fitzgerald and a Philippine-flagged merchant ship killed seven sailors and injured three. The commanding officers of both ships were relieved of their duties.

Aucoin assumed command of 7th Fleet September 2015, after serving as deputy chief of Naval Operations for Warfare Systems. He had prior experience in the Pacific, having served as commander of Carrier Air Wing 5, which is based at Naval Air Station Atsugi.