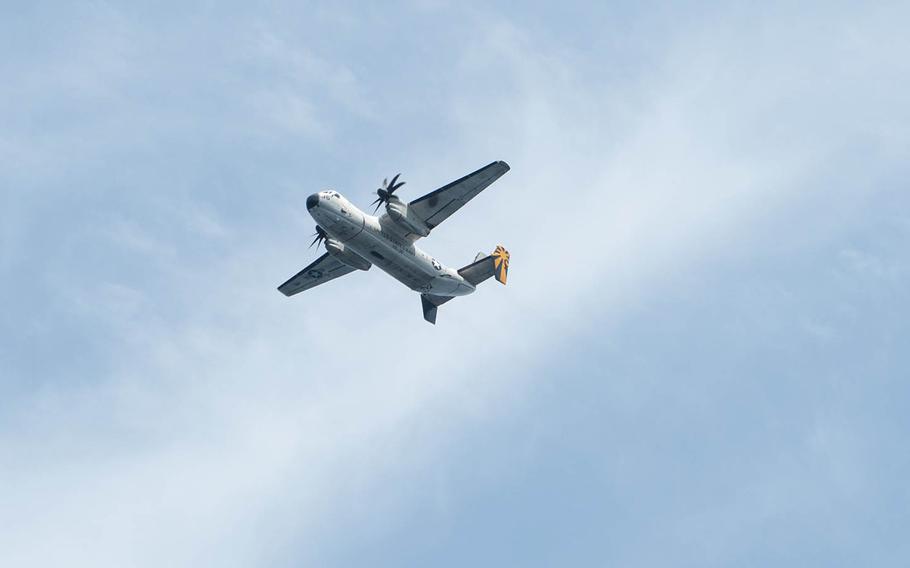 A memorial service is held aboard the USS Ronald Reagan in November 2017 for Lt. Steven Combs, Seaman Matthew Chialastri and Seaman Apprentice Bryan Grosso, who died when their C-2A Greyhound crashed into the Philippine Sea. (U.S. Navy screenshot)

YOKOSUKA NAVAL BASE, Japan — The Navy has recovered the C-2A Greyhound that crashed in 2017 in the Philippine Sea while en route to the USS Ronald Reagan, killing three sailors, according to the U.S. Pacific Fleet.

A Navy salvage team on May 21 used a contracted vessel to recover the aircraft, Pacific Fleet spokesman Cmdr. Nate Christensen said in an email to Stars and Stripes Thursday. The story was first reported by U.S. Naval Institute News.

The aircraft had been submerged since the Nov. 22, 2017, crash that killed its pilot, Lt. Steven Combs, Seaman Matthew Chialastri, an aviation boatswain’s mate, and Seaman Apprentice Bryan Grosso, an aviation ordnanceman. Eight passengers and crew survived the crash and were rescued by helicopter.

A Navy official said the service is “not publicly discussing disposition of remains out of consideration for the families,” adding that the sailors’ families were notified of the findings.

The Greyhound, which was assigned to the Reagan strike group’s Carrier Air Wing 5, was carrying cargo and the 11 passengers and crew from Marine Corps Air Station Iwakuni, Japan, to the aircraft carrier when it crashed. The Navy spent two days searching for the three missing sailors across nearly 1,000 square nautical miles.

The Yokosuka-based Ronald Reagan was participating in an annual field-training exercise with the Japan Maritime Self-Defense Force at the time of the crash.

The Navy in January 2018 said the Greyhound had sunk to a depth of about 18,500 feet, making the recovery operation the deepest ever attempted.

The team identified “two major pieces” of the aircraft and its black box on Feb. 5, leading to the May recovery, the Navy official said.

The Navy has not announced an official cause of the crash, but two Navy officials told Stars and Stripes in 2017 that the Greyhound may have been subject to a rare double-engine failure — though the cause of that was unclear. The officials spoke on condition of anonymity because they were not authorized to discuss an ongoing investigation.

Combs’ flight skills were heralded as the reason most of those on board survived the crash. Cmdr. Ronald Flanders, a Naval Air Forces spokesman, said soon after the crash that Combs’ surviving co-pilot reported that Combs “flew the hell out of that plane.”

“Our thoughts and prayers remain with the families, friends and shipmates of our three fallen sailors,” Christensen said in an email to Stars and Stripes Thursday.