Navy rear admiral visits Taiwan, report says, as yet another US warship passes through strait Ensign Antonia Vinci scans the horizon from the bridge of the USS Barry as the the guided-missile destroyer sails through the Taiwan Strait, Nov. 20, 2020. (Samuel Hardgrove/U.S. Navy)

Ensign Antonia Vinci scans the horizon from the bridge of the USS Barry as the the guided-missile destroyer sails through the Taiwan Strait, Nov. 20, 2020. (Samuel Hardgrove/U.S. Navy) 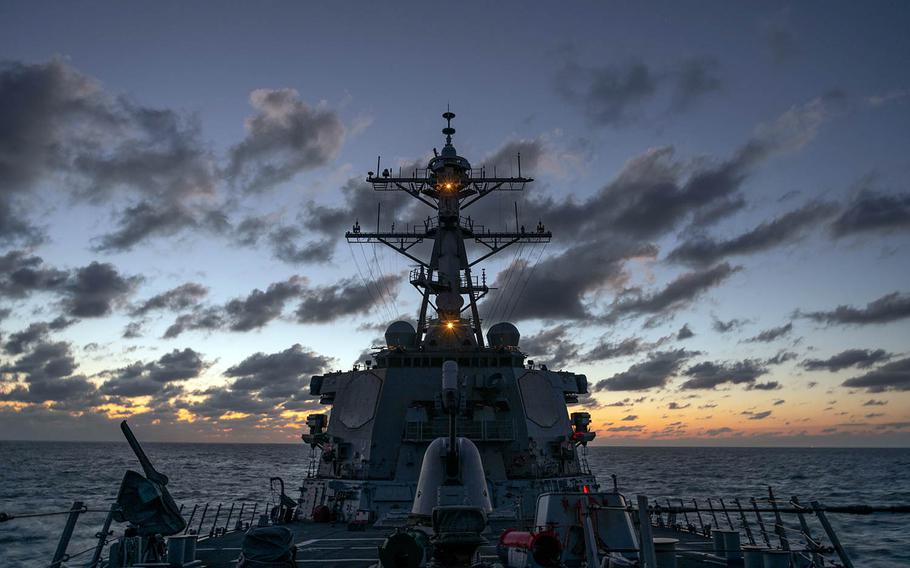 YOKOSUKA NAVAL BASE, Japan – The Navy sent another warship through the Taiwan Strait over the weekend, which also included an unconfirmed visit to the island by the officer in charge of intelligence gathering in the Indo-Pacific region, according to wire and Navy reports.

Studemen’s visit would not be the first by a high-ranking U.S. official to Taiwan this year. Health and Human Services Secretary Alex Azar, the most senior U.S. official to visit Taiwan since 1979, touched base there in August.

On Saturday, the Navy continued a record-seeking pace by sending a warship through the Taiwan Strait for the 12th time this year, according to 7th Fleet spokesman Lt. Joe Keiley. The guided-missile destroyer USS Barry’s “routine Taiwan Strait transit” was conducted “in accordance with international law,” he said by email on Saturday.

“The ship's transit through the Taiwan Strait demonstrates the U.S. commitment to a free and open Indo-Pacific,” Keiley said.

The Barry, based in Yokosuka, last steamed through the strait Oct. 12.

The number of Navy trips through the strait has increased along with tensions between the United States and China in the South and East China seas. The 110-mile-wide strait separates mainland China from Taiwan, and Navy passes through the waterway typically provoke condemnation from Beijing.

The U.S. regards the strait as international waters and acknowledges China’s claim to Taiwan under its “One China” policy but views the island’s status as unsettled. Taiwan split from mainland China in 1949.

The Barry’s transit came a day after the U.S. and Taiwan agreed to annual economic talks for the next five years following a round of talks in Washington last week, according to the State Department.

The U.S.-Taiwan Economic Prosperity Partnership Dialogue “was an opportunity to continue work in existing areas of economic cooperation while also forging new economic ties,” according to the statement Friday.

The State Department in early November approved the sale of MQ-9B Reaper drones, a package worth $600 million, according to Bloomberg. That deal followed $4.2 billion in approved arms sales in previous weeks, the news service reported Nov. 4.

Last year, Taiwan purchased $10 billion in materiel, from M1A1 Abrams tanks to F-16 Fighting Falcons, according to Voice of America on Nov. 6.