Navy ready to kick off large-scale air, land and sea exercise near Guam 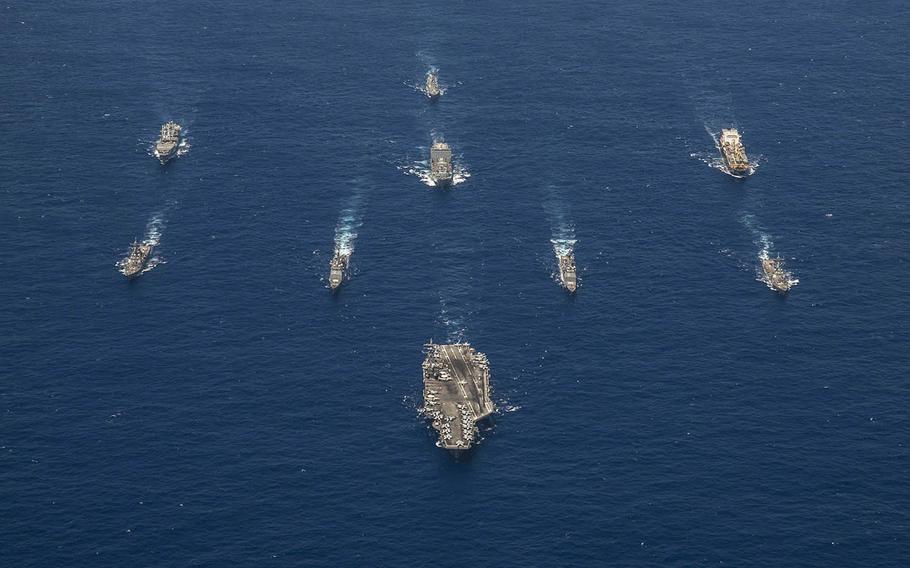 Some of the U.S.’s largest warships, along with 100 aircraft and 11,000 service members, will practice finding, tracking and engaging targets in the air, on land and in the sea around Guam this month.

Exercise Valiant Shield, which starts Monday and ends Sept. 25, will involve forces working on Guam and around the Mariana Islands Range Complex, the Pacific Fleet said in a statement Friday.

Joining them will be about 100 aircraft and 11,000 personnel from the Navy, Air Force, Army and Marine Corps.

“It is vitally important that we demonstrate to our allies and partners our strong commitment to a free and open Indo-Pacific,” the fleet director of maritime operations, Rear Adm. Michael Boyle, said in the statement. “Exercises such as Valiant Shield allow U.S. forces … to continuously improve joint lethality.”

This is the eighth Valiant Shield exercise since 2006, according to the statement. The most recent one took place in September 2018.

Valiant Shield follows last month’s Rim of the Pacific exercise off Hawaii, which involved navies from 10 nations with 22 surface ships and one submarine.

RIMPAC, which typically includes plenty of action ashore, was held entirely at sea this year because of the coronavirus pandemic.

Valiant Shield planners have taken steps to protect troops, their families and local residents from the virus, according to the fleet.

As of Friday, Guam had recorded 1,863 coronavirus infections, including 249 service members. That sum does not include approximately 1,150 cases from the aircraft carrier USS Theodore Roosevelt, which diverted to Naval Base Guam in late March and spent about two months fighting an outbreak on board.

The U.S. territory has been under a government-mandated “Pandemic Condition of Readiness 1” since Aug. 15 that shutters nonessential businesses; forces schools to use virtual instruction; prohibits most public gatherings; and closes parks and beaches to most visitors.

A stay-at-home order, in effect until at least Sept. 18, requires “all persons in Guam” to remain in their residences, except for essential activities such as food shopping, visiting a doctor or commuting to and from work.