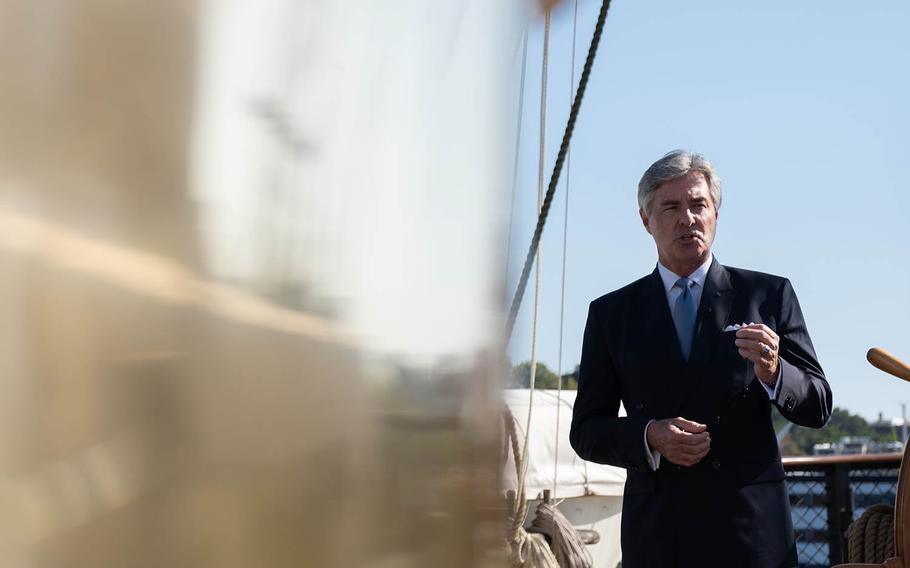 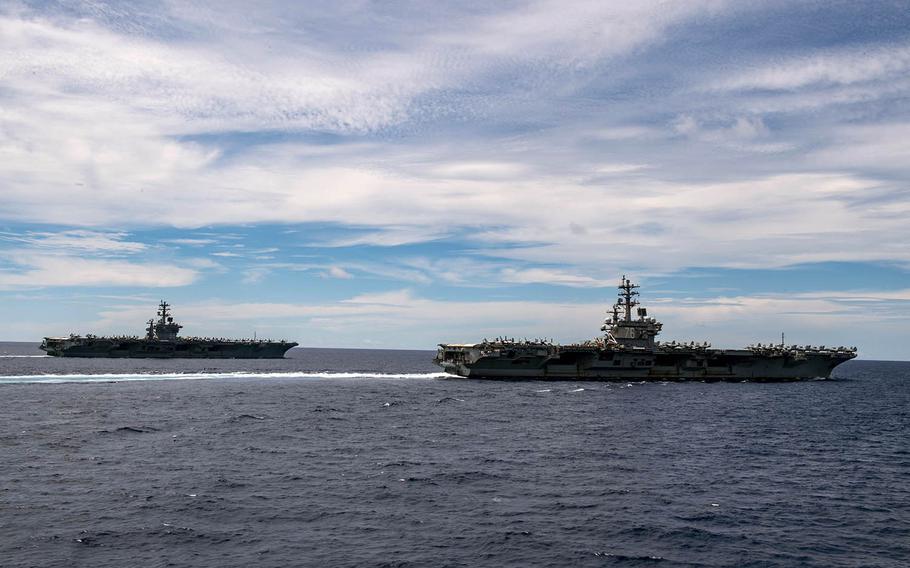 The aircraft carriers USS Nimitz and USS Ronald Reagan sail alongside each other in the South China Sea, July 6, 2020. (Cody Beam/U.S. Navy)

The Navy is resurrecting the 1st Fleet, a spokesman for the Navy secretary confirmed Thursday, days after the service’s top civilian leader called for a U.S. counterweight to rapidly growing Chinese military might in the Indo-Pacific region.

The “administrative requirements” to recommission the 1st Fleet “are in the final stages of coordination,” Capt. Jereal Dorsey, a spokesman for Navy Secretary Kenneth Braithwaite, said in an email to Stars and Stripes.

“We want to stand up a new numbered fleet,” Braithwaite said at the time. “And we want to put that numbered fleet in the crossroads between the Indian and the Pacific oceans, and we’re really going to have an [INDOPACOM] footprint.”

The mission Braithwaite described now belongs to the 7th Fleet, based at Yokosuka Naval Base, Japan, the only U.S. fleet in the Indo-Pacific. It includes the Ronald Reagan Carrier Strike Group, which is supported at times by ships from the San Diego-based 3rd Fleet.

Seventh Fleet is the Navy’s largest deployed fleet with 50-70 ships and submarines, 150 aircraft and approximately 20,000 sailors. Its almost 48 million-square-mile operations area stretches from the International Date Line in the central Pacific to the India/Pakistan border and from the Kuril Islands in the north to the Antarctic in the south.

The Navy can’t rely on 7th Fleet alone to cover that area, Braithwaite said. Its ships deploy frequently for missions such as freedom-of-navigation patrols in the Taiwan Strait and the South China Sea, where Beijing has built military bases on artificial islands in disputed waters.

Meanwhile, China’s navy has been growing rapidly. In September, it sent both of its aircraft carriers to sea as construction on a third continued.

“We have to look to our other allies and partners like Singapore, like India, and actually put a numbered fleet where it would be extremely relevant if, God forbid, we were to ever to get in any kind of a dust-up,” Braithwaite said at the symposium.

A new fleet could provide a much more formidable deterrent, he said.

“So we’re going to create the 1st Fleet, and we’re going to put it, if not Singapore right out of the chocks, we’re going to look to make it more expeditionary-oriented and move it across the Pacific until it is where our allies and partners see that it could best assist them as well as to assist us,” he said.

The 1st Fleet previously existed from just after World War II to the early 1970s.

“The obvious location for the fleet’s home port is Cockburn Sound in Perth alongside the Australian naval base HMAS Stirling, Ross Babbage, a former Australian assistant defense secretary, said in an email Friday.

“It is in an excellent swing location, offers ready access to the [Southeast] Asian straits and provides vast land-based strategic depth,” he said.

Western Australia is a top-rated port call for U.S. sailors and their families would consider the area a perfect resort environment, Babbage added.

“The Australian Government has already announced a substantial upgrade of many naval base and support facilities in the area,” he said. “This will include early installation of a new, very advanced underwater range and sub-surface surveillance system.”

Singapore is another natural homeport for the fleet since it already hosts U.S. aircraft carrier port calls, said Paul Buchanan, an American security analyst based in Auckland, New Zealand, in an email Friday.

Its disadvantages are a narrow, congested maritime space and laying within striking range of Chinese missiles.

Another potential home for the fleet, Darwin, in northern Australia has immediate access to the Pacific without the congestion problems and is largely out of reach of land-based Chinese missiles, Buchanan said.

“The port at Darwin would need to be dredged and expanded but otherwise would be a natural home port that also includes the already deployed 2,500 man Marine Rotational Force and its 3 (ground, air, logistics) combat elements working on a six month in, six month out rotation,” he said.

Lombrum Naval Base and airfield on the Papua New Guinean island of Manus is already being expanded under the joint Australian-U.S. redevelopment plan. However, the base is far east of the Indian Ocean and would need a lot of new infrastructure to support a fleet, he said.

China is developing naval facilities in places such as Pakistan and Djibouti, so it makes sense for its regional rivals to join forces and strengthen their collective defenses, Buchanan said.

“A 1st Fleet home port, especially on the Eastern Rim of the Indian Ocean, could serve as a cornerstone for that effort,” he said.