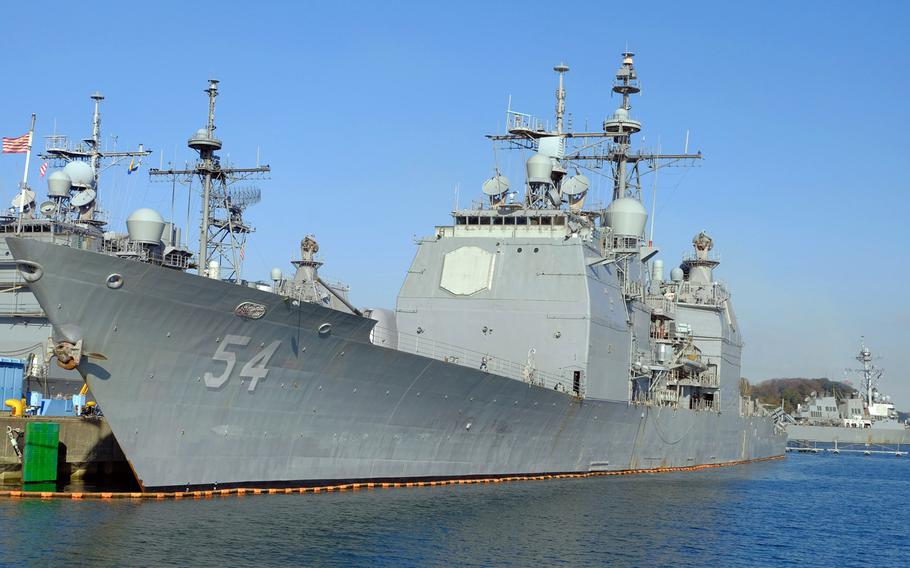 The USS Antietam is shown in port at Yokosuka Naval Base, Japan, shortly after running aground and spilling 1,100 gallons of hydraulic oil into Tokyo Bay on Jan. 31, 2017. A series of mistakes led to the accident, a Navy investigation report stated. (Tyler Hlavac/Stars and Stripes)

YOKOSUKA NAVAL BASE, Japan — The former commanding officer of the USS Antietam was “ultimately responsible” for the cruiser running aground and spilling roughly 1,100 gallons of hydraulic fluid into Tokyo Bay in January, a Navy investigation concluded.

The command investigation report, endorsed in April and obtained this week by Stars and Stripes through a Freedom of Information Act request, primarily blamed Capt. Joseph Carrigan’s “judgment and decision making, including his actions that distracted or rushed the bridge team.”

Carrigan was relieved from command on March 1, about one month after the accident.

The report describes a series of errors and incorrect judgments leading to the grounding, starting with a delayed ship departure caused by system errors and trash left on the pier. Crew members said the delay left Carrigan in a foul mood.

“The CO was angry, I didn’t know why, and told me to get to the bridge and ‘fix it,’” said the ship’s acting combat systems officer, a lieutenant whose name was redacted. “There was a fog on the bridge, a sort of zero-defect mentality that conveyed don’t say anything or the CO would get upset. The CO liked to get underway on time, and things would get inflated in the moment.”

Incorrect navigational planning and execution failed to account for sustained winds of 23-31 mph and gusts of 35 mph, the investigation said. A series of mishaps also led to the anchor dragging. The ship ran aground on shoals just outside Yokosuka Naval Base.

The lieutenant junior grade who served as the ship’s navigator was familiar with the ship but wasn’t a qualified officer of the deck. The officer had previously handled only a cruiser in simulations and on a temporary assignment, the report said.

The crew’s briefing on anchoring was also substandard, according to the report.

Antietam still might have avoided the shoals had Carrigan not removed himself and key watchstanders from the bridge while the crew struggled with the anchor, the report concluded. In addition, crew members failed to provide Carrigan with adequate maneuvering recommendations, the report said.

Engines on the ship were stopped while attempting to recover the anchor.

Fearing damage to the ship’s sonar dome, Carrigan waited until the anchor was in sight before restarting the engines.

The ship ran aground roughly 90 seconds after the order was given to restart the engines.

Meanwhile, communications between the bridge and the combat information center were “almost non-existent” after Carrigan ordered the radio volume lowered, according to another officer’s testimony.

The ship’s executive officer shared some blame for failing to prevent the grounding, but the investigation also credited him for preventing harm to fishing vessels in the area.

“The XO prevented the ship from running into breakwater by ordering the bridge team to execute a hard right rudder after I stated we had good water to both sides,” the ship navigator said. “This prevented [Antietam] from hitting the seawall and greater damage to the ship.”

The report recommended that Carrigan be removed for cause and stated that several crew members, including the executive officer, officer of the deck and the navigator, receive written reprimands.

Antietam was the first of two Yokosuka-based ships this year to end up in a serious accident while transiting through Japanese waters. Seven sailors were killed in a June 17 collision between the destroyer USS Fitzgerald and a cargo ship, about 64 miles southwest of the naval base.

The USS Antietam remains in dry dock undergoing maintenance. The repair bill for the Antietam was expected to be at least $4.2 million at the time of the investigation.