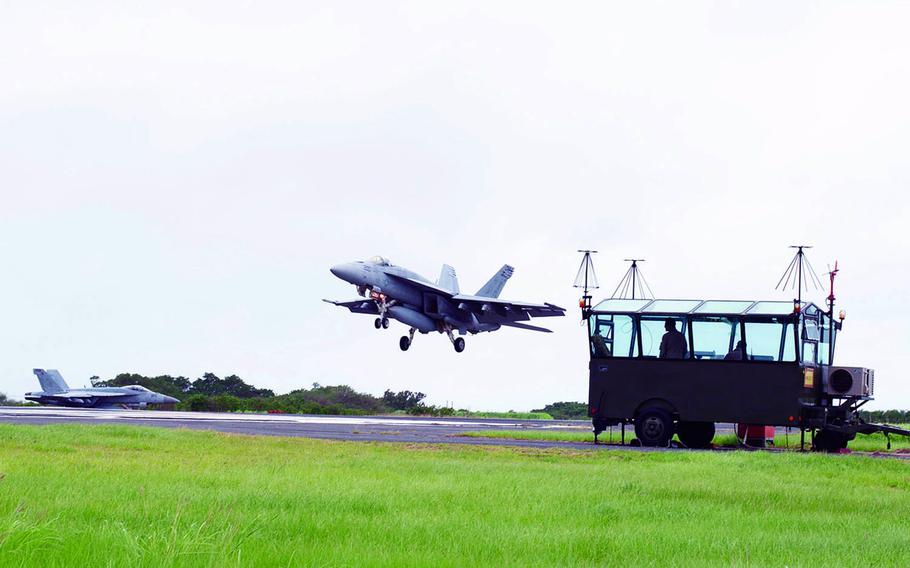 Pilots must be current on their carrier landing qualifications before heading to sea, and field carrier landing practice, as naval aviators know it, is an annual ritual.

At Iwo Jima, known as Iwo To in Japan, senior pilots will fly at least six sorties — three during the day and three at night — and during each sortie complete seven to eight touch-and-goes. Junior pilots may complete 12 or more touch-and-goes per sortie.

The pre-deployment training is the final step for aviators before the Reagan departs from Yokosuka Naval Base, Japan. Practice takes place on the remote Japanese island where more than 25,000 U.S. and Japanese troops died in a grueling World War II battle in 1945.

Crew members gearing up for the patrol will quarantine to reduce the risk of a coronavirus outbreak.

Fully vaccinated troops must adhere to a home-to-work regimen for 14 days before departing, Task Force 70 spokesman Lt. Cmdr. Joe Keiley said by phone on Wednesday. Non-vaccinated service members must remain isolated in their homes for a two-week period.

“We are not really changing our posture on COVID mitigation practices with social distancing, mask wearing and hand sanitizer that is currently in place even with the rollout of the vaccine,” Reagan spokeswoman Lt. Cmdr. Dawn Stankus said by phone Wednesday.

“Every sailor that is assigned to the USS Ronald Reagan and is going on the deployment has been offered to receive the vaccine,” she said.

The Navy has said Iwo Jima is not a suitable permanent location for touch-and-go training due to the difficulty of maintaining the remote facilities. In the event of bad weather, carrier landing trials move to other U.S. airfields in Japan.

The Japanese government has purchased a suitable replacement field on the island of Mageshima in Kagoshima prefecture; however, a local mayor came out in October against the plan to bring carrier landing practice there, according to an Oct. 8 report in the Asahi newspaper.