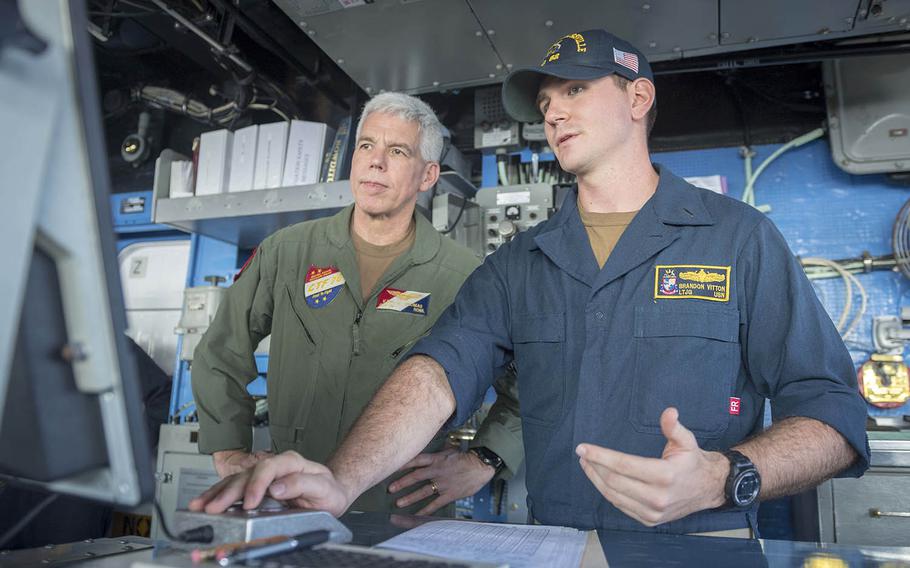 TOKYO — The White House has nominated a naval officer with command experience in the Western Pacific to lead the 7th Fleet as it aims to keep pace with its Chinese competition.

A naval aviator, Thomas began his career in the E-2C Hawkeye, a tactical early-warning aircraft, and rose up the command ranks with service as executive officer aboard the carriers U.S.S. Dwight D. Eisenhower and George Washington, and commander of a third, the USS Carl Vinson, according to his Navy biography.

A Northern Virginia native, Thomas earned his commission in 1985 through the Naval ROTC at Rensselaer Polytechnic Institute. He also holds a master’s degree from the Naval Postgraduate School.

If confirmed by the Senate, Thomas would succeed Vice Adm. Bill Merz, who took his post Sept. 12, 2019. The job also comes with a promotion. Thomas would take a leading role in an international arena where a rising China confronts its neighbors, and sometimes the United States. The 7th Fleet is the tool the U.S. employs to demonstrate its reach and resolve to its allies and friends, and to Beijing.

The 7th Fleet, which includes up to 70 vessels and 20,000 sailors, may keep the peace or shoulder the U.S. response if hotspots like the contested Senkaku Islands or Taiwan kindle into conflict.

The odds of U.S. warships encountering Chinese vessels are set to increase along with tension across the Taiwan Strait and the frequency of U.S. freedom-of-navigation patrols in the South China Sea, professor Bo Kong, co-director of the Institute for US-China Issues at the University of Oklahoma, said Monday by email to Stars and Stripes.

Any 7th Fleet commander “will be confronted with the question of how to carry out its designated mission in a manner that is secure and consistent with the U.S. Indo-Pacific strategy while avoiding a direct military conflict with China,” Kong wrote.

“Specifically, it requires some forward thinking over how to develop rules of engagement with Chinese naval ships, how to deescalate tensions in case of a close encounter or collision, and how to protect and enhance the deterrence of U.S. naval assets against the backdrop of the shifting balance of power in China’s near seas,” he wrote.

President Joe Biden’s administration has affirmed its commitment to assist Japan should the Senkakus, a group of islets set strategically northeast of Taiwan, come under assault. Japan complains of increasing instances of China’s coast guard interfering with Japanese fishing vessels in the area. Both nations this year have empowered their coast guards to open fire there if threatened.

The head of Indo-Pacific Command, Adm. Philip Davidson, in March told the Senate Armed Services Committee that China may be contemplating a move to reclaim Taiwan sooner rather than later. China considers Taiwan a breakaway province.

"We have indications that the risks are actually going up," Davidson said.

Unlike its treaty with Japan, the U.S. has no obligation to come to Taiwan’s military support, but it aids the island democracy through outward signs, such as the visit last week of by former U.S. Sen. Chris Dodd and two former deputy secretaries of state, and by direct arms sales.

The U.S. recognizes China’s claim but considers Taiwan’s status unresolved. The 7th Fleet periodically sends warships to the Taiwan Strait in defiance of Chinese demands that third nations seek its permission before steaming through the 110-mile-wide passage.

The 7th Fleet also carries the flag on an increasing number of freedom-of-navigation patrols through the South China Sea, a 1.3 million square-mile area beset by knotty quarrels.

An estimated $3.4 trillion in trade passed through the South China Sea in 2016 out of a global total of $15.9 trillion, according to ChinaPower, an online project of the Center for Strategic and International Studies.

China has built up and occupied seven small islands and reefs in the Spratly Islands and constructed airfields, barracks and missile sites there, along with other outposts manned by the Philippines, Malaysia, Taiwan and Vietnam, according to the CIA World Factbook.

China ignores a 2016 U.N. tribunal decision in favor of the Philippines in a dispute over sovereignty in the area.

Beginning in late March, the Philippines, a U.S. ally, and China engaged in a simmering stand-off when dozens of Chinese maritime militia vessels, posing as fishing boats, anchored at Whitsun Reef inside the Philippine economic exclusion zone, according to Foreign Policy magazine.