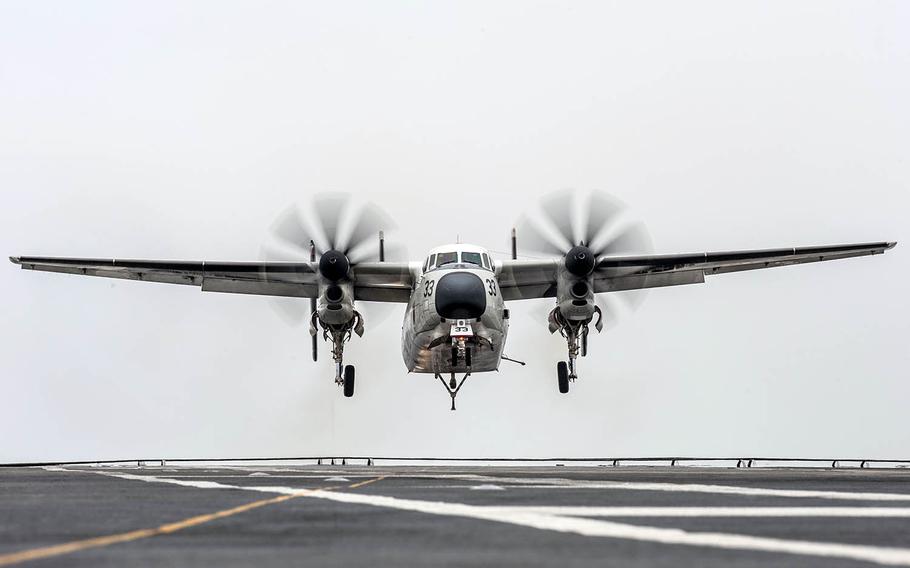 YOKOSUKA NAVAL BASE, Japan — The Navy has mapped the undersea wreckage of a cargo plane that crashed into the Philippine Sea last November, killing three sailors.

Personnel aboard the research ship RV Petrel surveyed the wreck of the C-2A Greyhound Feb. 3-5 and determined that its cockpit and fuselage are resting in two sections on the ocean floor, the Navy said in a statement Friday.

The aircraft’s flight recorder appears to be intact and planning for a salvage mission continues, the statement said.

Deepwater-salvage experts found the aircraft Dec. 29 by tracking its emergency beacon 18,500 feet below the surface. A recovery operation would be the deepest ever attempted.

“Despite very challenging conditions, every effort will be made to recover the aircraft and our fallen sailors,” the Navy statement said.

The Greyhound was carrying 11 passengers and cargo from Marine Corps Air Station Iwakuni to the aircraft carrier USS Ronald Reagan when it crashed on Nov. 22. It was assigned to Carrier Air Wing Five, the aviation component of carrier’s strike group.

The Navy has yet to announce the official cause of the crash. It appears the Greyhound suffered a rare double engine failure, two Navy officials previously told Stars and Stripes on condition of anonymity because they were not authorized to discuss an ongoing investigation. They said it was unclear what would have caused both engines to fail.

The crash capped off a deadly year for the Navy’s Japan-based 7th Fleet that included a series of high-profile accidents and mishaps. In January, the USS Antietam ran aground and spilled roughly 1,100 gallons of hydraulic fluid into Tokyo Bay; in June, a collision between the USS Fitzgerald and a merchant ship killed seven sailors; and in August, the USS John S. McCain ran into an oil tanker, killing 10 more.