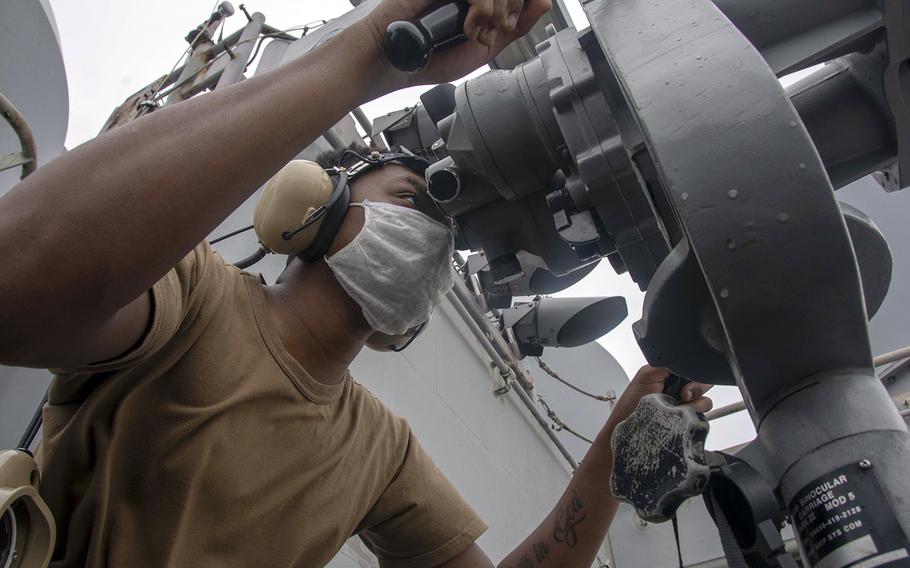 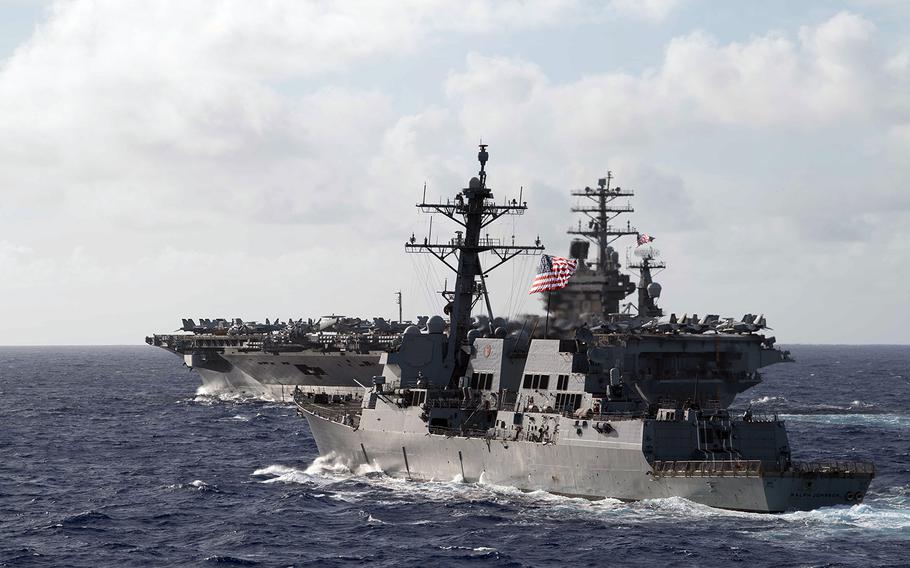 YOKOSUKA NAVAL BASE, Japan — For the second time in a week, the U.S. Navy paired aircraft carrier strike groups for training in the Philippine Sea as global competitor China prepares for its own carrier exercise in the same area.

The USS Ronald Reagan joined the USS Nimitz on Sunday for “integrated exercises and operations” that undergird U.S. defense commitments in the Indo-Pacific region, according to a Navy statement. A Navy video from the exercise Sunday shows the carriers launching aircraft and sailing in formation.

The Nimitz and the USS Theodore Roosevelt teamed up for flight drills in the Philippine Sea on June 21. The Roosevelt steamed out of Guam in early June two months after a coronavirus outbreak onboard sidelined the carrier and contributed to a temporary gap in U.S. carrier presence in the Western Pacific.

Since then, the Navy has flexed its muscle, with three carrier strike groups present in the region simultaneously.

Dual-carrier drills are relatively rare. Sunday marked the seventh time such operations happened in the Indo-Pacific since 2001, according to 7th Fleet spokesman Lt. Joe Keiley.

In that time, no back-to-back dual-carrier operations took place until this month, although the Roosevelt, Reagan and Nimitz exercised together east of the Korean Peninsula in 2017.

Before the June 21 exercise, the last time two carriers trained together in the Western Pacific was in November 2018 when the Reagan and USS John C. Stennis rendezvoused in the Philippine Sea.

“Dual carrier operations demonstrate our commitment to regional allies, our ability to rapidly mass combat power in the Indo-Pacific, and our readiness to confront all those who challenge international norms that support regional stability,” Wickoff said in the statement.

Although the Navy went through the spring short on carriers in the Indo-Pacific, the amphibious assault ship USS America, based in Japan, with F-35B Lightning II stealth fighters aboard, patrolled the region during that time.

The Roosevelt was deployed to the region in January; a coronavirus outbreak in late March forced the carrier to stop in Guam to sanitize the ship and test, isolate and treat ill sailors. They ultimately stayed there for more than two months as more than 1,150 Roosevelt sailors tested positive for the virus, one of whom died.

Meanwhile, the Reagan and Nimitz were making final preparations for patrol and taking precautions such as pre-deployment quarantines to prevent the coronavirus from coming onboard.

The drills come as China plans its own carrier operations this summer in the region, the South China Morning Post reported May 24. Beijing in December commissioned its second aircraft carrier, the Shandong, which left its shipyard for sea trials and training drills on May 29, according to the nation’s defense ministry.

Still, Nimitz Strike Group commander Rear Adm. James Kirk said, “only the U.S. Navy can integrate a carrier strike force on this scale and consistently project power to protect freedom of the seas,” according to the statement.

“With more than 10,000 U.S. Navy Sailors from across the world working together as one cohesive team, these operations are what keep us ready to respond to any contingency,” he said.