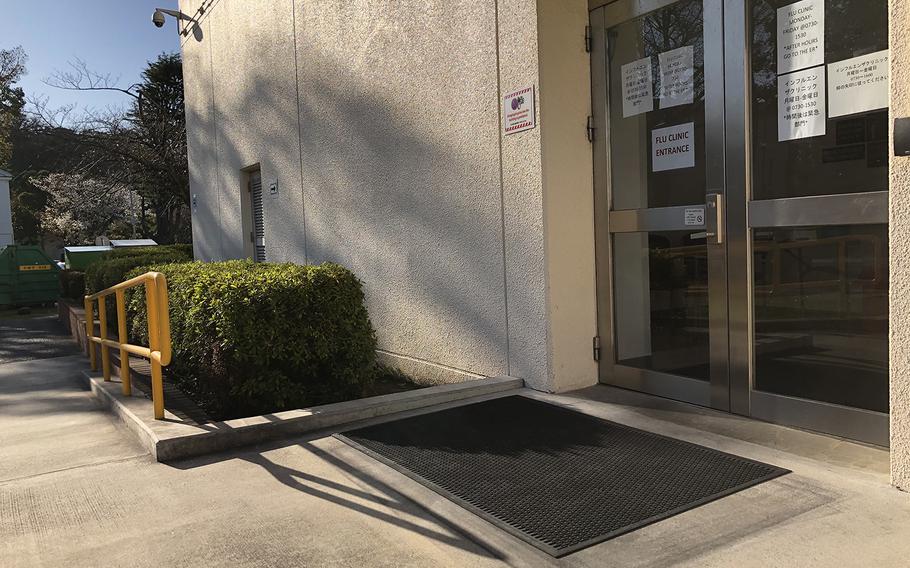 Yokosuka Naval Hospital opened a clinic on March 18, 2020, for those with flu-like symptoms. (CHRISTIAN LOPEZ/STARS AND STRIPES)

Previously, base hospitals in Japan waited up to seven days for patient test results, the Yokosuka hospital commander, Capt. Drew Bigby, said in a video on USFJ’s Facebook page.

Tests were processed at Japanese hospitals, or flown to Tripler Army Medical Center in Hawaii, the Centers for Disease Control and Prevention in Atlanta or Naval Medical Center San Diego for processing, said Dr. Andrew Fisher, an Air Force major and the public health emergency officer at Yokota, earlier this month.

Yokosuka started processing those test samples “about a week ago,” after specially trained medical staff were brought in to use specialized equipment, hospital spokeswoman Erika Figueroa told Stars and Stripes on Tuesday.

That capability should “dramatically increase the number of tests we can do daily in Japan and will speed the results,” USFJ spokeswoman Maj. Genieve White wrote Friday in an email to Stars and Stripes.

As the number of infections rise in the U.S., hospitals there are “quickly getting overwhelmed with the amount of testing required,” Winegardner said Tuesday. Processing tests in Yokosuka should help relieve some of that pressure.

Military hospitals in Japan have tested more than 100 service members, DOD civilians and families since testing began about six weeks ago, Winegardner said. As of Tuesday morning, none had tested positive.

Testing is not unlimited. Coronavirus tests are administered after the subject has been screened and signed off by a physician.

The Yokosuka lab can process “a little under 40 tests a day — and that’s coming from all over USFJ,” Winegardner said.

“When somebody thinks they might have it or they’re starting to exhibit symptoms, you are still going to call the doc,” he said in the town hall. “The doc is going to say what protocols you’ll need to do and then they will make the decision if you’re going to come in and get tested.”

Physicians use CDC guidelines to screen patients for testing, White wrote in her email.

“Symptoms are a factor in determining who to test for COVID-19,” she said. “But as everyone knows, symptoms that can result from a COVID-19 infection can also be caused by other viral infections such as the common cold or influenza as well as other diseases.”

To speed the screening process, the Yokosuka hospital on March 18 created a flu clinic to check patients with flu-like symptoms quickly.

“We have seen several benefits of launching the flu clinic, such as lessened wait times to be screened by a provider, reduced risk of exposure to other patients and staff and improved use of resources,” Figueroa told Stars and Stripes in an email Monday.