Navy hands out more punishments to sailors after deadly collisions 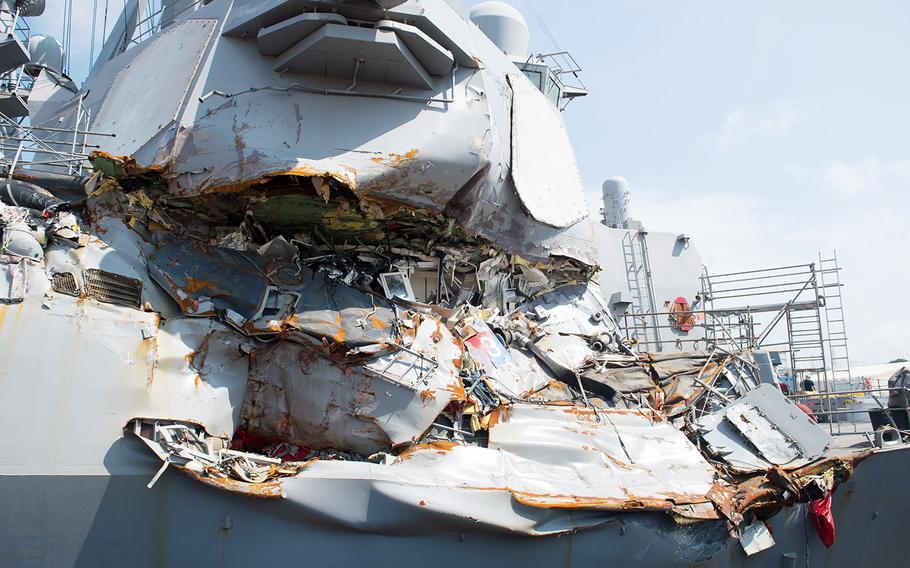 YOKOSUKA NAVAL BASE, Japan — The Navy has punished four more sailors for their roles in the USS Fitzgerald and USS John S. McCain collisions that killed 17 sailors last year.

Adm. Frank Caldwell – tapped in October to oversee disciplinary actions for the accidents – held six nonjudicial punishment hearings for sailors from both ships on Jan. 25 at Yokosuka Naval Base, Japan, the Navy said in a statement issued Thursday.

On June 17, seven sailors died after the Fitzgerald crashed into a civilian merchant ship about 60 miles southwest of Yokosuka. The McCain collided with an oil tanker near Singapore on Aug. 21, leaving 10 sailors dead.

The executive officer, command master chief and one officer from the Fitzgerald were found guilty of dereliction in the performance of duties and received a punitive letter of reprimand, a Navy statement said.

Caldwell dismissed the NJP charges of one officer and another enlisted sailor from the McCain.

Article 32 hearings to consider court-martialing Cmdr. Bryce Benson, who commanded the Fitzgerald, and Cmdr. Alfredo Sanchez, former commander of the McCain, and three Fitzgerald officers are scheduled for March 6-8 at the Navy Yard in Washington, D.C.

A slew of sailors have either been fired or forced into retirement in wake of the collisions.

Last year, the Navy relieved the ships’ commanders along with the head of 7th Fleet. The leaders of Task Force 70 and Destroyer Squadron 15, which oversee the fleet’s destroyers and cruisers, were also relieved of their duties.

Last September, Pacific Fleet Commander Adm. Scott Swift announced he would retire at an unspecified date after being told he would not be the Navy’s pick to take over U.S. Pacific Command after Adm. Harry Harris retires this year.