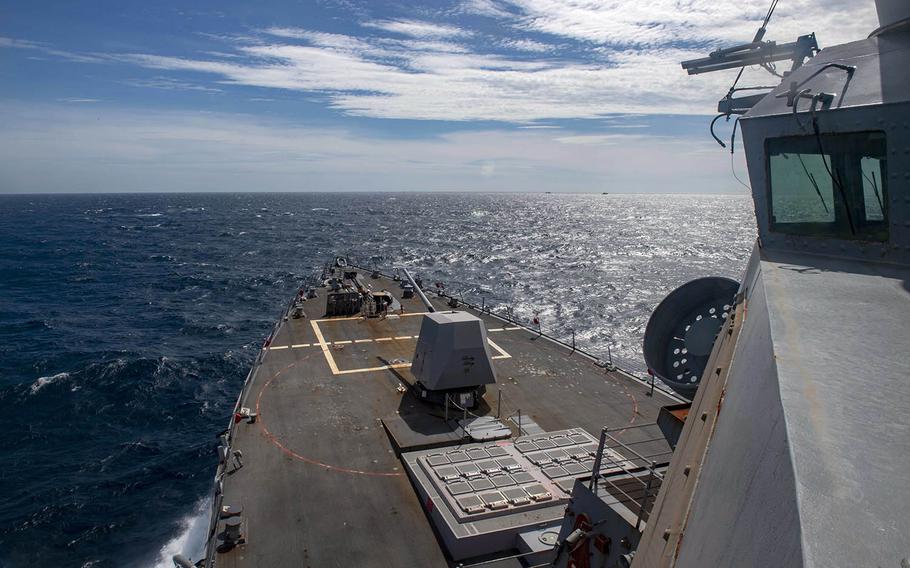 The USS Mustin steamed near the Paracel Islands, its second cruise in the area this year, to challenge “excessive maritime claims and reinforce laws of the sea in international waters,” according to a Navy statement.

China has set up military airfields and outposts on the islands that have raised concern among surrounding nations and within the United States, which sends its warships through the area on a regular basis.

The U.S. went on record in July formally rejecting China’s claims in the region. On Wednesday in Honolulu — Thursday in the South China Sea — Esper said in a livestreamed speech that Beijing has failed to honor commitments it made to refrain from militarizing parts of the South China Sea.

The Mustin’s operation came the same day the U.S. Bureau of Industry and Security sanctioned 24 Chinese companies “for their role in helping the Chinese military construct and militarize” features in the South China Sea, including the Paracels, according to a Commerce Department statement.

“Despite protests from the United States and other countries, the government of the People’s Republic of China has been rapidly building the artificial islands since 2013, enabling the Communist Chinese Party’s militarization of disputed outposts in the South China Sea to undermine the sovereign rights of U.S. partners in the region,” the statement said.

China claims sovereignty over the Paracel Islands and has occupied them since 1974, according to the CIA World Factbook. Taiwan and Vietnam also lay claim to the islands.

So far this year, at least five other U.S. Navy vessels, mostly destroyers but also one littoral combat ship, the USS Montgomery, have passed by either the Paracels or the Spratly Islands, another contested group in the South China Sea. The Mustin in May passed by the Paracels.

During freedom-of-navigation operations, Navy ships typically sail within 12 nautical miles of a contested shoreline. The operations are intended to refute territorial claims and demonstrate a right to open navigation, according to the Navy.

More than $5 trillion in international trade passes through the South China Sea each year, according to the Navy statement. Esper in his speech at the Daniel K. Inouye Asia-Pacific Center for Security Studies said access to the region is essential to trade.

“The [National Defense Strategy] identifies the Indo-Pacific as the department’s priority theater given its economic and strategic significance,” he said. “More than half of all global maritime trade transits through Asia, and the region alone accounts for 60 percent of the world’s gross domestic product.”