Navy confirms plan to deploy F-35Cs to Japan after 2021 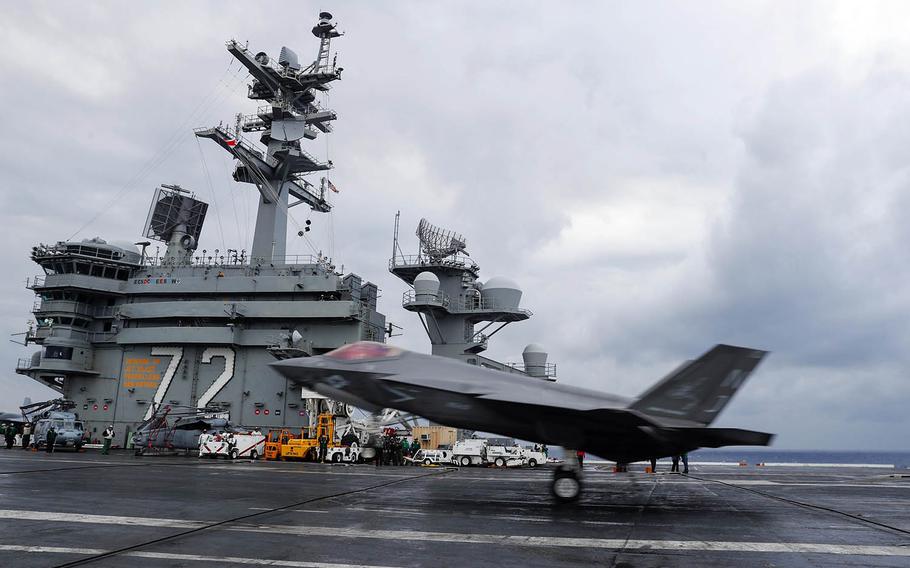 YOKOSUKA NAVAL Base, Japan — The Navy expects to deploy its version of America’s most advanced joint strike fighter to Japan sometime after 2021.

“The U.S. Navy places its most advanced and combat-capable units in the forward deployed naval force,” she told Stars and Stripes in an email. “This future upgrade will enhance the capabilities of the air wing and its mission to defend Japan and contribute to regional peace and security.”

The F-35Cs will be assigned to Carrier Air Wing 5 of the USS Ronald Reagan strike group. Last week, CVW-5 finished relocating its fixed-wing aircraft from Naval Air Facility Atsugi to Iwakuni, which is hundreds of miles away near the southern end of Japan’s main island of Honshu.

The F-35 comes in three variants that cater to the needs of each service branch. The Air Force’s F-35As — designed for traditional takeoffs and landings — are lighter and can carry more fuel, while the Marine Corps’ F-35Bs are capable of short takeoffs and vertical landings that make them compatible with amphibious assault ships such as the USS Wasp.

Manufacturer Lockheed Martin says the F-35C is the “only” fighter designed and built explicitly for carrier operations.

“The F-35C variant has larger wings and more robust landing gear than the other variants, making it suitable for catapult launches and fly-in arrestments aboard naval aircraft carriers,” the company says on its website. “It’s wingtips also fold to allow for more room on the carrier’s deck while deployed.”

The Navy says these foldable wings are “critical” for their use on aircraft carriers that can hold more than 70 aircraft, including 18C Hornets, 18G Growlers and 18E/F Super Hornets, E-2D Hawkeyes and C-2A Greyhounds.

Last month, pilots from Strike Fighter Squadrons 125 and 101 flew F-35Cs on day and night qualifications with 140 arrested landings aboard the USS Abraham Lincoln in the Atlantic Ocean. The carrier qualifications bring the Navy’s variant of the joint strike fighter one step closer to operational status.

Cmdr. Thomas Bodine, a former TOPGUN instructor now serving as an executive fellow at the Chicago Council on Global Affairs, said the F-35s will increase the lethality of Naval air forces in the region and allow pilots to engage contacts at farther distances.

“This 5th generation frontline aircraft, with its highly-advanced sensor suite, will transform it into a critical node on the battlefield,” he said in an email to Stars and Stripes.

“Having these improved capabilities forward deployed to Japan will further enhance the United States Navy’s distributed lethality operational concept, an outcome which is directly aligned with the new National Security Strategy and National Defense Strategy,” he added.