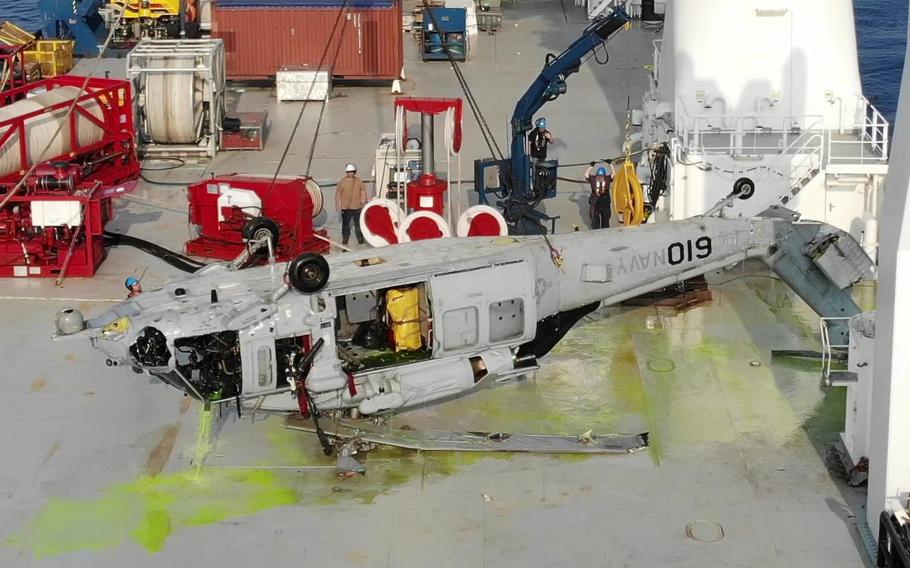 The U.S. Navy Seahawk helicopter lies upside-down on the deck of a salvage ship after being lifted 3.6 miles from the ocean floor near Okinawa on March 18, 2021. (U.S. Navy)

The Navy has recovered a Seahawk helicopter lying 3.6 miles below waters off the coast of Okinawa, breaking its depth record for recovery of sunken aircraft.

The twin-engine Sikorsky MH-60S had crashed into the Philippine Sea on Jan. 25, 2020 while operating from the amphibious command ship USS Blue Ridge.

The air crew escaped with only minor injuries.

The Naval Sea Systems Command’s Supervisor of Salvage and Diving was tasked with salvaging the submerged copter resting 19,075 feet below the surface of the water, the Navy said in a news release issued Tuesday.

The Navy located and documented the wreckage last spring using side-scan sonar and photographs of the helicopter, the Navy said.

Earlier this month, personnel from the Supervisor of Salvage and Diving returned to the crash site with a deep-water, remote-controlled vehicle called CURV 21, which can dive to maximum depths of 20,000 feet.

A salvage ship with a deep-lift reel contracted from Guam arrived at the site March 17, and the helicopter was pulled to the surface the next day.

The chopper was transported to the Navy base at Yokosuka, Japan, from where it will be shipped back to the United States, the Navy said.

“As a whole, this operation was fast-paced and entirely successful,” Bryan Blake, deep ocean program manager for the Supervisor of Salvage and Diving, said in the news release. “Our efforts validated the Navy’s deep ocean search and recovery requirements. The capability to recover the airframe and make it available to determine the cause of the accident is a huge plus helping to ensure naval aviation safety.”