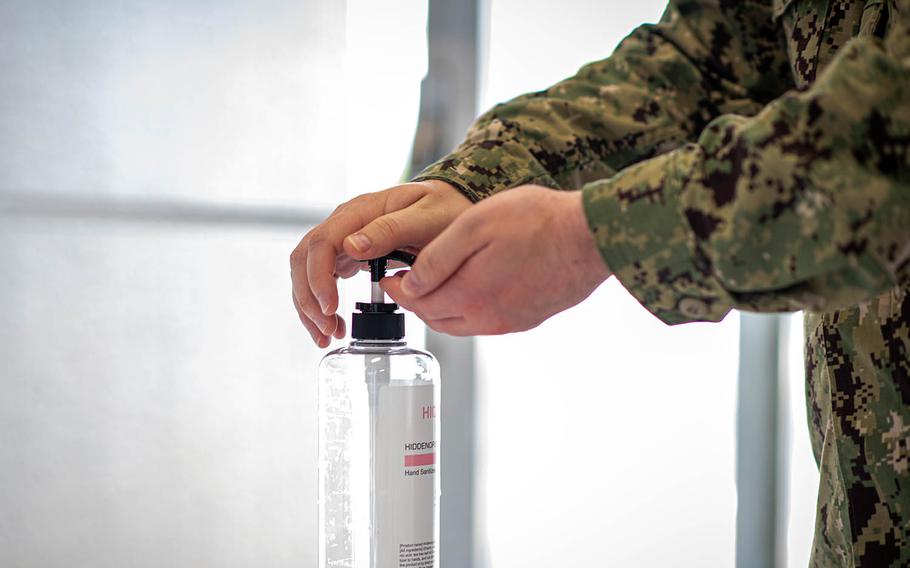 A sailor sanitizes his hands before entering the Navy Exchange at Yokosuka Naval Base, Japan, Aug. 13, 2020. (Taylor Curry/U.S. Navy)

TOKYO — The home of the 7th Fleet in Japan reported 19 new cases of the coronavirus Friday, as Japan’s capital city logged another 500 new infections.

The U.S. military in Japan, as a whole, announced 33 new cases as of 6 p.m. Friday. Yokosuka Naval Base, 35 miles south of central Tokyo, said 17 of the 19 people found to be infected there since Tuesday were discovered during contact tracing.

“Most of the locally transmitted [coronavirus] cases can be traced to a single dinner party at an on-base residence,” a base Facebook post Friday states. “Community members are reminded to keep events like these small (10 or less), maintain social distancing, and wear face masks, especially indoors.”

One of the new Yokosuka patients tested positive after falling ill with symptoms of COVID-19, the coronavirus respiratory disease, according to the base. Another, a base employee, also became ill and tested positive at a Japanese medical facility.

Thirty-four coronavirus patients are under observation at Yokosuka. The base has reported 41 new cases so far in December, its second highest month after 69 in August. At least 186 people have tested positive there since March.

All or parts of the Tokyo metro area are off-limits to most U.S. personnel.

Naval Air Facility Atsugi, 27 miles southwest of central Tokyo, has one new case, an employee of the Fleet and Family Support Center who tested positive earlier in the week, according to a message from base commander Capt. Manning Montagnet on Facebook.

It’s the first coronavirus case there since Montagnet took command Sept. 17, he wrote.

The support center closed for a thorough sanitization and should reopen Monday, according to message.

Referencing the anticipated arrival of a coronavirus vaccine, Montagnet wrote: “We cannot allow premature enthusiasm for the vaccine, the holidays nor ‘COVID fatigue’ to cause us to individually relax health measures and compromise our safety and the health of our families, friends and co-workers.”

Marine Corps Air Station Iwakuni, 540 miles west of Tokyo, reported 11 new coronavirus cases, all of them new arrivals to Japan via the Patriot Express, a government-chartered passenger air service. They were immediately quarantined along with close contacts, the air station said in a Facebook post.

“The likelihood of further spread of the virus remains low due to strict adherence to restriction of movement procedures,” the base said.

Also, on Okinawa, some teachers and students in eight classes at Kadena High School who stayed home four days this week were told to return on Monday, Principal Kristopher Kwiatek said in a message to families and school staff Friday.

They stayed home after someone at the school tested positive on Monday and remained there pending the results of further testing. All the tests were negative, Kwiatek wrote, but some who were identified as close contacts must remain at home.

The students continued their schoolwork via Google Classroom, said Miranda Ferguson, a spokeswoman for Department of Defense Education Activity, Pacific, in an email Friday to Stars and Stripes. She declined to say how many students were affected by the order.

In South Korea, the commander of Camp Humphreys, Army Col. Mike Tremblay, on Friday afternoon put parts of Sosabeol and AK Plaza within Pyeongtaek city off-limits for at least 24 hours. Humphreys is the largest U.S. base on the Korean Peninsula and headquarters for U.S. Forces Korea.

The city is tracing coronavirus contacts in those areas, Tremblay said in a Facebook Live presentation Friday. He said he would readdress the order Saturday. It does not prohibit U.S. residents of that area from going home, but they should stay indoors for the duration, he said.