Navy base in Japan cites risky behavior for new virus cases; US Forces Korea hints at returning to tighter restrictions 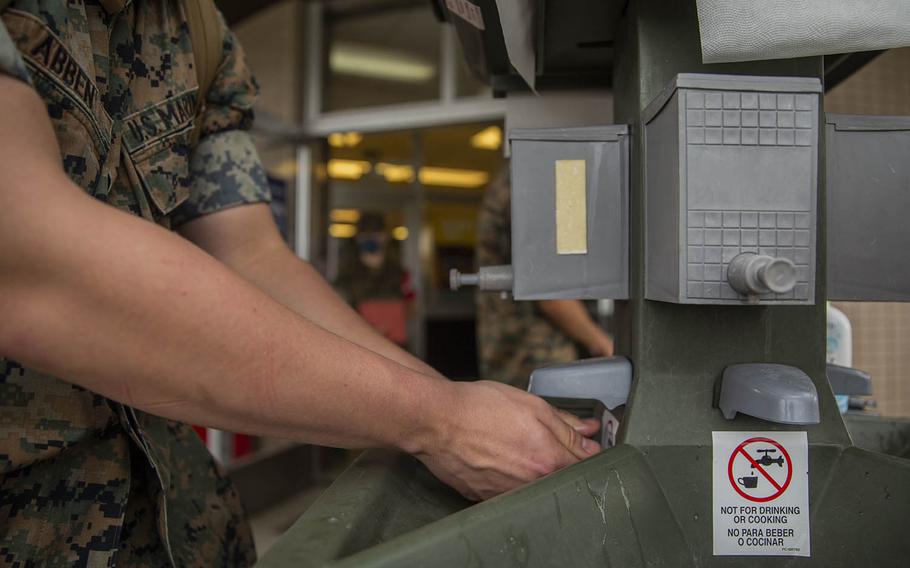 TOKYO – The home of the U.S. 7th Fleet attributed a rash of new coronavirus cases to unauthorized behavior in risky places, while in South Korea the U.S. military hinted at another round of strict public health measures.

Yokosuka Naval Base, 35 miles south of Tokyo, said 11 new coronavirus cases had appeared since Friday, many of them linked to forbidden activities, such as trips to bars and restaurant dining in Yokohama and Tokyo, according to a Facebook post Tuesday.

In a Facebook post Tuesday, USFK said it may raise its coronavirus risk to substantial, or Health Protection Condition-Charlie, which brings tighter restrictions on travel and off-duty activities and may mean closing Defense Department schools again.

The cold is here in earnest, he said Tuesday at a meeting in Seoul, “and on top of that, COVID-19 is raging now, so we are having a harsher winter than ever before.” COVID-19 is the respiratory disease caused by the coronavirus.

Although the virus appears to be “holding its breath for a while” after infecting 1,030 people on Sunday, a pandemic record, the country faces a “very precarious situation,” he said.

The government is ready to raise its public health level to the third tier and ask its citizens to adhere to measures such as working from home and closing businesses.

The government ordered schools closed as of Tuesday, and Chung said about a third of public employees should be working from home by the year’s end.

Most South Koreans have borne inconveniences and followed the recommended social-distancing measures, Chung said, “but some of them have been pouring oil on the ferocious spread of COVID-19 while being off their guard and irresponsible.”

USFK reported no new patients as of 7 p.m. Tuesday. So far this year it has recorded 435 people infected with the virus, of whom only 29 acquired the virus locally.

The command late Monday identified an individual who contracted the coronavirus on Camp Casey as a South Korean base employee, according to a news release. USFK did not identify the individual’s workplace but said the person was being taken to a local facility for treatment.

“Many of the locally transmitted COVID-19 cases were linked directly to unauthorized activities in Yokohama and Tokyo,” the post said.

Yokohama, 16 miles north of the naval base, is considered a high-risk area, although sailors are permitted to visit the city. Tokyo is off-limits for nearly all U.S. service personnel, except those who live there or have official business.

Bars, fitness centers and places to meet for drinks and appetizers, called izakayas, are off-limits in Yokohama, along with dining inside restaurants and similar activities. Sailors are also banned from museums, zoos and the seasonal light displays popular in the metro area.

Violations of the coronavirus restrictions involve “people being people,” a base spokesman, Randall Baucom, said Tuesday by phone to Stars and Stripes, but not necessarily in large groups.

Small gatherings were blamed for sparking small outbreaks in November at Marine Corps Air Station Iwakuni and Yokota Air Base, both in Japan.

The naval base has 43 coronavirus patients under observation. It has reported 52 cases so far this month, the most since 69 in August.

Tokyo reported 460 people newly infected with the coronavirus on Tuesday, a slump in the record-breaking trend of more than 500 cases per day the previous week, according to public broadcaster NHK. However, testing facilities are typically closed on weekends, hence a dip in the number of new cases reported early in the week.