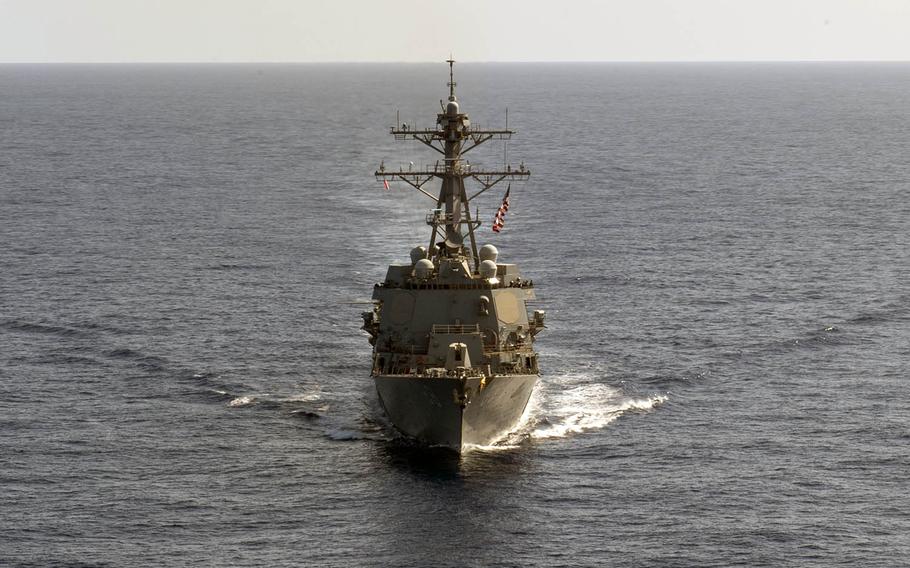 The guided-missile destroyer USS Preble, shown here April 18, 2019, made a passage with the USNS Walter S. Diehl through the Taiwan Strait on Wednesday, May 22, 2019, the Navy reported. (Bryan Niegel/U.S. Navy)

The Navy on Wednesday sent two ships through the Taiwan Strait, marking the fifth month in a row that U.S. vessels have passed through the contentious waterway.

Guided-missile destroyer USS Preble and the oil tanker USNS Walter S. Diehl sailed the strait north to south, according to The Associated Press and the Pacific Fleet headquarters at Joint Base Pearl Harbor-Hickam, Hawaii.

“The ships’ transit through the Taiwan Strait demonstrates the U.S. commitment to a free and open Indo-Pacific. The U.S. Navy will continue to fly, sail and operate anywhere international law allows,” according to an email Thursday from Pacific Fleet spokesman Cmdr. Nathan J. Christensen.

"According to information learnt from the relevant department, China followed closely the passage of the U.S. warships through the Taiwan Strait, and we are fully aware of the whole process," China ministry spokesman Lu Kang said at a news conference, according to The Associated Press.

In early April, the French frigate Vendemiaire transited the strait, shadowed by the Chinese military, according to an April 25 report by the Reuters news agency. In response, China disinvited France from a naval parade April 22 marking the 70th anniversary of the founding of China’s navy, according to Reuters.

The strait separates the island of Taiwan, which China regards as a breakaway province, from the Chinese mainland. Under the “One China” policy, the U.S. acknowledges that China asserts sovereignty over Taiwan, but considers Taiwan’s status as unsettled.

Chief of Naval Operations Adm. John Richardson, during a visit with Chinese military officials in January, re-affirmed the U.S. commitment to One China, he told reporters in Tokyo after the exchange.

Since then, U.S. vessels, including a Coast Guard cutter, have passed through the strait once a month. The transit Wednesday by the Preble and the Diehl marked the seventh such passage by a U.S. vessel in eight months. U.S. vessels reportedly sailed through there three times in all of 2018.

The destroyers USS Stethem and USS William P. Lawrence sailed the strait together on April 28-29. The Coast Guard cutter Bertholf and the destroyer USS Curtis Wilbur made the passage on March 24-25.