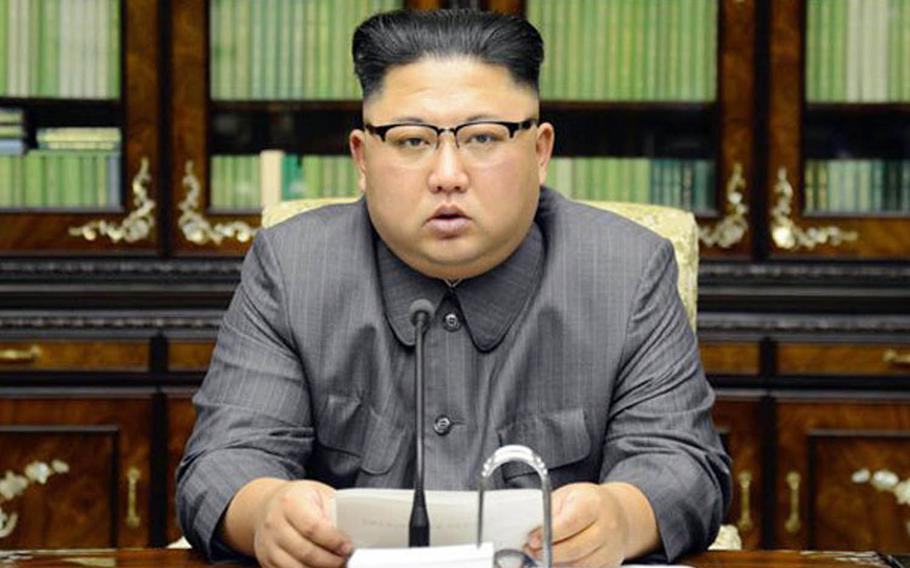 Kim Jong Un issued the statement after Trump warned in his U.N. General Assembly address on Tuesday that he will “totally destroy” North Korea if forced to defend the United States or its allies.

The U.S. president assailed Kim again on Friday, calling him a "madman" whose regime will be "tested like never before.",

North Korea’s foreign minister, meanwhile, raised the frightening prospect of detonating a hydrogen bomb over the Pacific Ocean, although he stressed the ultimate decision was up to Kim.

Trump also authorized new sanctions in an executive order aimed at punishing foreign companies that deal with the North, the latest in a series of moves to isolate and impoverish the defiant regime.

The latest war of words escalates already high tensions that have generated the most serious crisis on the divided peninsula since the 1950-53 Korean War.

“The mentally deranged behavior of the U.S. president … makes even those with normal thinking faculty think about discretion and composure,” Kim Jong Un said in a rare personal statement published on Friday.

Kim said Trump was “playing with fire” and warned his regime “will consider with seriousness exercising of a corresponding, highest level of hard-line countermeasure in history.”

He said Trump's remarks "have convinced me, rather than frightening or stopping me, that the path I chose is correct and that it is the one I have to follow to the last."

“I will make the man holding the prerogative of the supreme command in the U.S. pay dearly for his speech calling for totally destroying [North Korea],” he added.

“Whatever Trump might have expected, he will face results beyond his expectation,” Kim said. “I will surely and definitely tame the mentally deranged U.S. dotard with fire.”

The Merriam-Webster Dictionary’s Twitter site said searches for the meaning of “dotard” spiked after the report.

It said the word as used today commonly means “a person in his or her dotage,” which it defined as “a state or period of senile decay marked by decline of mental poise and alertness.” But the word initially had the meaning of “imbecile” when it was first used in the 14th Century, according to Merriam-Webster.

North Korea has made swift progress in its efforts to develop a nuclear weapon that could target the U.S. mainland. Kim also has threatened to fire missiles into the waters near the U.S. territory of Guam.

The communist state conducted its sixth and most powerful nuclear test on Sept. 3, claiming it had detonated a hydrogen bomb. It also has test-fired dozens of missiles since last year, including two intercontinental ballistic missiles in July.

Kim didn’t elaborate on what countermeasures he may consider. But North Korean Foreign Minister Ri Yong Ho told reporters in New York that “it could be the most powerful detonation of an H-bomb in the Pacific.”

“We have no idea about what actions could be taken as it will be ordered by leader Kim Jong Un,” he said, according to South Korea’s Yonhap News Agency.

Ri had been expected to address the General Assembly on Friday, but he was not listed on the U.N. roster for the day. He could speak on a later date.

The United States and China have conducted atmospheric nuclear tests but not for decades.

“Apart from the serious strategic implications, the physical blast and electromagnetic effects of such a detonation would be catastrophic,” Morris Jones, an Australian space analyst, wrote in a blog for the Sydney-based Lowy Institute think tank.

He said that in addition to saber rattling, such a test could serve a practical purpose.

“North Korea has apparently reached the limit of what it can achieve with underground nuclear testing,” he said. “Now that the feasibility of a North Korean thermonuclear weapon has been demonstrated, the next step will be to produce an even bigger bang.”

The previous six nuclear tests were all conducted at the North’s mountainous Punggye-ri nuclear testing site, although Pyongyang has sent two missiles over Japan in recent months.

South Korea’s spy agency has said the North could fire an ICBM toward the Pacific in the days surrounding the Oct. 10 anniversary of the foundation of the ruling Workers’ Party. North Korea frequently times high-profile missile tests and other events to coincide with key anniversaries.

While North Korea is known for its fiery rhetoric and frequently insults adversaries via state-run media, including calling ex-President Barack Obama “a monkey.”

But South Korean media said it was unprecedented for Kim to make such a direct address to the world. The article was accompanied by an undated photo of the third-generation leader seated at a desk and looking straight at the camera.

Kim, a 33-year-old leader who assumed power after his father died of a heart attack in 2011, was clearly infuriated by Trump’s speech to world leaders on Tuesday.

Trump mocked the North Korean leader during his U.N. speech, calling him “rocket man” and saying he’s “on a suicide mission for himself and for his regime.”

Trump has become known for using language similar to that usually employed by North Korea. Over the summer, he warned he would unleash “fire and fury” on the North if it continues to threaten the United States. He also said the U.S. military was “locked and loaded.”

Pyongyang in turn said it has prepared a military plan to fire missiles into the waters near Guam, home to major U.S. bases, but was putting the plan on hold as it monitored U.S. behavior.

U.S. administration officials have stressed the need to exhaust diplomatic measures but warned patience is wearing thin and military options are on the table.

North Korea has persisted with its weapons programs despite nine rounds of U.N. Security Council sanctions since 2006, the most recent and toughest adopted following the nuclear test earlier this month.

“North Korea’s nuclear weapons and missile development is a grave threat to peace and security in our world and it is unacceptable that others financially support this criminal, rogue regime,” he said as he met the South Korean and Japanese leaders for lunch. “Tolerance for this disgraceful practice must end now.”

The order also issued a 180-day ban on vessels and aircraft that have visited North Korea from traveling to the United States.

Beijing is North Korea's economic lifeline and its support is seen as crucial to any effort to stanch Pyongyang's nuclear program.gamel.kim@stripes.com Twitter: @kimgamel