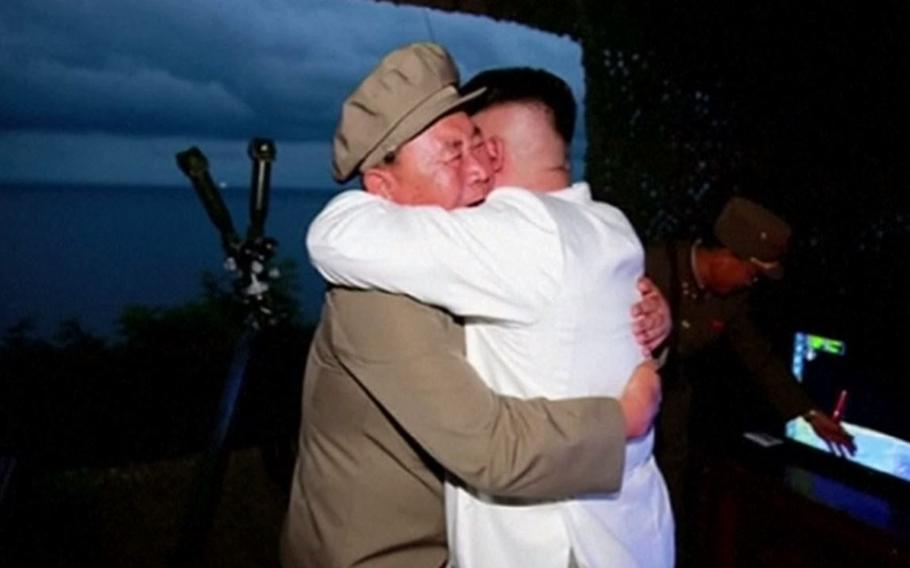 Kim Jong Un’s comments were full of North Korea’s trademark hyperbole, but the facts on the ground are increasingly giving the erratic leader something to brag about.

The Pukguksong, or Polaris, ballistic missile fired Wednesday traveled 310 miles from the eastern port city of Sinpo before crashing into the sea. It reportedly could have flown at least twice as far, but the North Koreans fired it at a high angle to avoid getting too close to Japan.

The technical success comes at a time of heightened tensions on the divided peninsula, with a new round of joint U.S.-South Korean war games that began on Monday.

The North Korean leader, who watched the launch from an observation deck, called it the “greatest success and victory,” and said the North had “joined the front rank of the military powers fully equipped with nuclear attack capability,” according to the state-run Korean Central News Agency.

KCNA confirmed the missile was fired at a high angle and used solid fuel. Several photos in North Korea’s official Rodong Sinmun newspaper showed the missile soaring into the sky and the ruler smiling and embracing officials who were with him.

“The U.S. mainland and the operational theater in the Pacific are now within the striking range of the [Korean People’s Army], no matter how hard the U.S. tries to deny it,” it said.

North Korea has test-fired nearly 20 missiles since the U.N. Security Council tightened sanctions March 2 to punish it for conducting its fourth nuclear test and a long-range rocket launch earlier in the year.

Most of those efforts were considered failures, including two other SLBMs, and analysts say the North is years away from developing a nuclear weapon that could reach the U.S. mainland.

But they also say North Korean scientists are learning from each try, and recent high-profile successes like Wednesday’s launch are raising alarms.

“Considering the North’s irrational decision-making system under the one-man dictatorship and the hard-to-predict character of Kim Jong Un, it is fair to say that the risks of the threats becoming real are very high,” South Korean President Park Geun-hye said Wednesday while visiting soldiers on the front lines.

A U.S. think tank that monitors military activity in the communist country said the North still faces significant technological challenges in its SLBM program, including building a new class of submarine to carry the missile.

But at the current rate of development, it could be able to strike targets in the region by 2020, according to 38 North, a website run by the U.S.-Korea Institute at Johns Hopkins University.

“The North is demonstrating a nascent capability to strike at South Korea with an SLBM, thereby complicating ballistic missile defense planning and operations,” it said.

North Korea has several land-based missiles with a range that puts them in reach of U.S. bases in the region. Submarine-launched ballistic missiles would increase the threat because they’re harder to detect in advance.

“There were many people who said North Korea will never achieve its nuclear goals,” said Moon Keun-sik, an analyst at the Korea Defense and Security Forum. “Now there’s technical progress … and they’re showing it off.”

Pyongyang has vowed to continue with its ballistic missile program despite Security Council resolutions prohibiting it from using the technology.

The Security Council held a closed-door meeting late Wednesday to discuss the latest launch, but the debate was complicated by Chinese opposition to plans for the deployment of an advanced U.S. missile defense system in South Korea, The Associated Press reported.

The U.S. State Department also strongly condemned the missile test and urged the North “to refrain from actions and rhetoric that further raise tensions in the region and focus instead on taking concrete steps towards fulfilling its commitments and international obligations.”

North Korea has threatened to retaliate for a host of perceived insults, including joint military exercises that are held annually, U.S. sanctions against its leader, the defection of a senior diplomat earlier this month and the U.S. anti-missile battery.