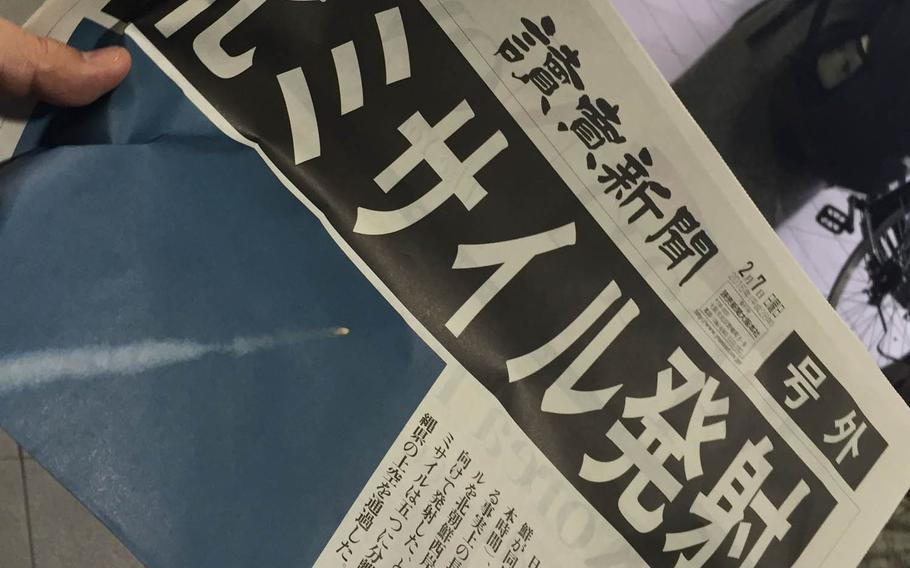 A Japanese newspaper headline announces a North Korean long-range missile launch in February. The North tried to launch a missile from its east coast Tuesday, May 31, 2016, but the attempt failed, South Korean military officials said. ()

SEOUL, South Korea — North Korea attempted to fire a missile Tuesday morning, underscoring its determination to defy the international community and march forward in its efforts to develop a nuclear-tipped missile that can reach the U.S. mainland.

The launch happened near Wonsan on the country’s east coast at about 5:20 a.m., “but it is presumed to have been unsuccessful,” a South Korean military official said. He did not give more details, saying only that the military was investigating and maintaining a high level of combat readiness.

South Korea’s Yonhap News agency quoted unidentified sources as saying it could have been a powerful mid-range Musudan missile that could reach U.S. military bases in Asia and the Pacific.

The launch came days after President Barack Obama urged countries to pursue a nuclear-free world during a visit to Hiroshima, Japan, where the world’s first wartime atomic bomb fell in 1945. He and other world leaders also discussed ways to deter North Korea from further developing its nuclear program at the G7 summit last week.

Pyongyang staged its fourth nuclear test in early January, followed by a long-range rocket launch that prompted a new round of tougher U.N. sanctions against the isolated nation.

Tuesday’s effort would be the fourth launch failure over the past two months. The North also fired a missile from a submarine in April, although it flew only about 20 miles.

Analysts have warned against gloating over the failures, saying the North likely is learning from its mistakes.

North Korean leader Kim Jong Un recently called for military talks with the South, but South Korea rejected the overture, saying it was insincere as long as the North continued pursuing its nuclear program.

The peninsula remains technically at war after the 1950-53 Korean War ended in an armistice instead of a peace treaty. About 28,500 U.S. troops are stationed in South Korea.