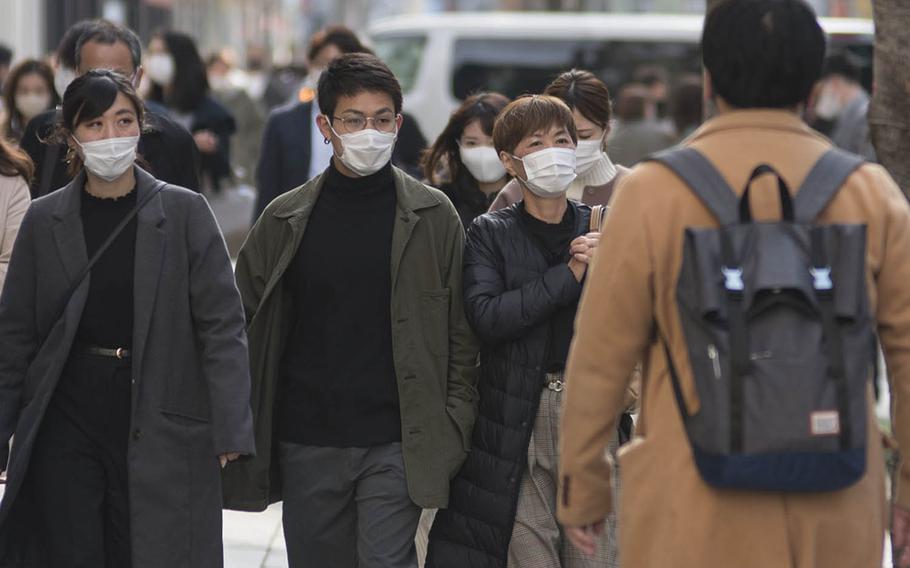 Statements by the Yokosuka public affairs office Wednesday on Facebook indicate it is clarifying details in response to questions about the policy. However, individuals under working ROM may not visit other areas on or off base, such as gyms, commissaries, exchanges or mess halls, according to a Naval Forces Japan order Friday. They must work apart from non-vaccinated colleagues.

All three installations appear to have tailored the policy to their needs. Their changes come with lengthy conditions, including eligibility and continued testing, that are detailed on their Facebook pages.

The changes follow a USFJ order Monday that modifies the overarching ROM policy that differentiates between fully vaccinated and partially or unvaccinated travelers and newcomers. Fully vaccinated people in some cases may spend seven days at home followed by seven days with access to their installations, but not the surrounding community.

Typically, restriction of movement, a form of quarantine meant to stem the coronavirus’s spread, is spent at an individual’s home or in lodging on base.

Yokota and Yokosuka, the homeport of the U.S. 7th Fleet, are the two largest U.S. military installations in the greater metropolitan area. The ROM changes come as new case numbers fall and more people are vaccinated at their bases.

New arrivals and returning travelers at some stages of the pandemic accounted for the bulk of new infections reported by the U.S. military in Japan and South Korea.

In February, USFJ Command Chief Master Sgt. Rick Winegardner Jr. said the command would ease some forms of restricted movement as an incentive for service members, civilian employees and families to get vaccinated. Service members must volunteer for the coronavirus inoculations because the Food and Drug Administration approved them for emergency use only.

The U.S. military started isolating new arrivals and returning travelers in summer 2020 at the government of Japan’s request. A similar policy, which has not changed, is in place for U.S. Forces Korea.

Four U.S. installations in Japan reported seven new COVID-19 cases as of 6 p.m. Wednesday, according to base Facebook posts.

Sasebo Naval Base on Kyushu Island said two new arrivals to Japan came up positive on the test required to exit quarantine. They are the only cases on base. Naval Air Facility Atsugi, 26 miles southeast of Tokyo, said one person tested positive after arriving at a local airport; a second individual contracted the virus from another infected person. The base has five patients under observation.

U.S. Army Japan at Camp Zama, southeast of Tokyo, said one person recently tested positive during pre-travel screening, according to a news release.

Kadena Air Base on Okinawa had two individuals test positive after showing COVID-19 symptoms, according to a news release. An unidentified number of their close contacts were quarantined.

In Tokyo and Seoul, the coronavirus persists although one-day case numbers have wavered.

Tokyo on Wednesday reported another 340 people were infected with COVID-19, according to public broadcaster NHK. That’s the highest one-day count since 340 on Feb. 25, according to metro government data.

The city and the surrounding prefectures of Saitama, Chiba and Kanagawa are under a state of emergency until March 21.

Seoul reported 132 new patients on Tuesday, according to the Korea Disease Control and Prevention Agency. Gyeonggi province, home of Camp Humphreys and Osan Air Base, reported 199.

Seoul’s number is its highest since 129 new patients on Friday; Gyeonggi reported its most recent high, 218 new infections, on March 3.

In another development, U.S. Forces Korea announced Tuesday it expects shipments of the Johnson & Johnson vaccine approved for use Feb. 27. It did not specify a delivery date.

The Johnson & Johnson vaccine “will enable USFK to begin its transition to the remaining three priority groups sooner than expected,” according to a news release. Those groups include Defense Department teachers, and employees at commissaries, post offices, exchanges, transit services and others.