More Marines heading Down Under this year for annual Darwin deployment 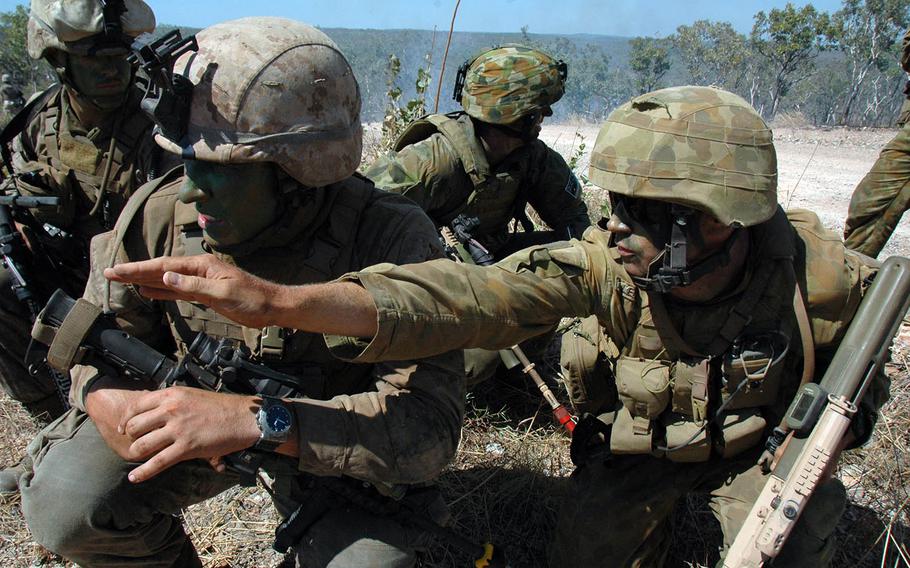 U.S. Marines and Australian soldiers train at Mount Bundey Training Area during a past rotational deployment to Darwin, Australia. (Seth Robson/Stars and Stripes)

The Marine Corps is boosting its annual rotation of forces to Australia’s Northern Territory.

Elements of Marine Rotational Force — Darwin will start turning up in Australia this month to prepare for the arrival of nearly 1,600 Marines, eight MV-22 Osprey tilt-rotor aircraft and an artillery battery of six M777 Howitzers.

The seventh rotation to Darwin is more than 300 Marines stronger than last year’s mission, but still more than 900 Marines short of the long-term plan to send 2,500 Marines Down Under for six months each year.

“These initiatives strengthen the ability of Australia and the U.S. to work together, and with regional partners, in the interests of regional stability and security,” she said in a statement issued Friday.

Since 2012, the Marines’ Darwin mission has increased in size and complexity, enhancing the capability of Australian and U.S. forces to work together, the statement said.

Indonesia, Japan, Malaysia, the Philippines, Singapore, Thailand and other nations will participate in or observe some of those drills, Payne said.

“Australia and the U.S. have a longstanding history of working together to promote peace, security and stability across the globe,” he said. “Australia welcomes opportunities to work with the United States to foster greater cooperation with our regional partners.”

The Australian Defence Force is also planning air training exercises with the U.S. Air Force this year under the Enhanced Air Cooperation Initiative, the statement said.

“Enhanced Air Cooperation activities complement and support training with the U.S. Marines, as it increases the ability of Australia and the U.S. to deploy into the region, where and when they are required to do so,” Payne said.

The Marines are expected to complete this year’s rotation to Australia in October, the statement said.