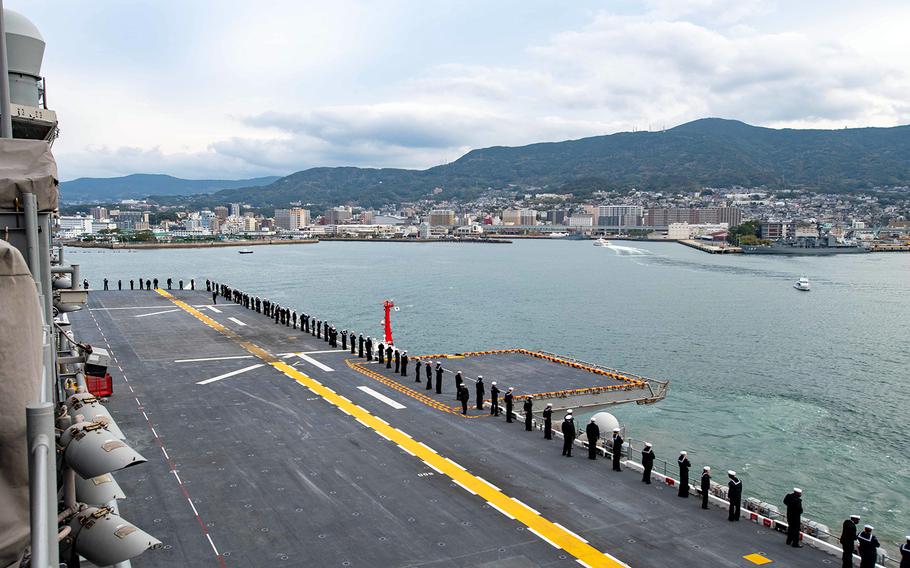 Several civilians working at Sasebo Naval Base in southwestern Japan have lost their base access and are facing disciplinary hearings for violating a coronavirus public health order, installation commander Capt. Brad Stallings announced this week.

Stallings said “some folks” violated the order “this weekend and have now lost their base access.” Further, they face a “Civilian Administrative Forum” and additional sanctions, he said. Further details were not released.

U.S. civilians, such as family members, Defense Department employees and contractors, who fall under the status of forces agreement go before a forum for a case review before their privileges and access are curtailed on a long-term basis, base spokesman Aki Nichols told Stars and Stripes by text message Wednesday.

A forum is an informal process where a magistrate speaks with the individual, who may present a defense or evidence of extenuating circumstances, he said.

Several civilians previously violated Sasebo’s public health order, which restricts military members to the installation except for emergencies and prohibits civilian personnel from visiting bars and restaurants off base. Security personnel found two civilians in an off-base bar on April 10.

Violators are immediately restricted in their movements to prevent the possible spread of the coronavirus, Nichols said.

In most cases, a temporary restriction and a warning is sufficient punishment, Nichols said. However, in cases where more serious administrative action is considered, such as being barred from the base, the civilian is entitled to a hearing by a forum.

Forum magistrates look for patterns of misconduct, repeat offences, severity of violation and the likelihood that the individual will continue committing misconduct, he said.

Base debarment is a last result and only comes when evidence suggests the offender will persist as a threat to the health and safety of the base, he said.

“It is so unfortunate that a few endanger us all,” Stallings said on Facebook. “Thank you to the thousands who are doing it right every day. Also, thank you to the ones who are getting involved and politely correcting folks when you see something wrong.”