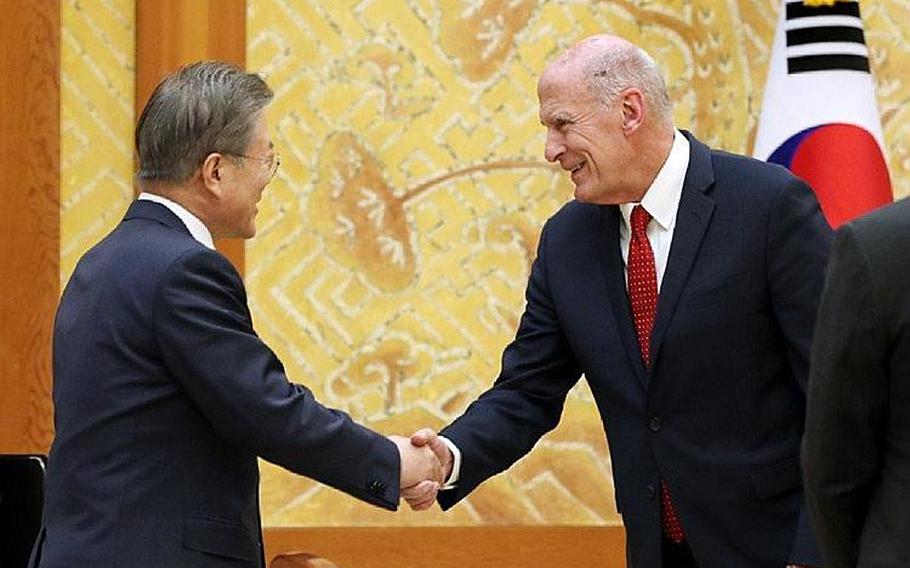 SEOUL, South Korea — President Moon Jae-in met with the U.S. intelligence chief Wednesday in Seoul amid concern over a stalemate in nuclear talks with North Korea.

Moon and Director of National Intelligence Dan Coats “held wide and in-depth discussions and exchanged opinions on issues concerning South Korea and the United States,” the presidential office said in a statement.

It did not provide more details, but Coats’ visit came three weeks after the second summit between President Donald Trump and North Korean leader Kim Jong Un ended without an agreement over efforts to persuade the North to give up its nuclear weapons.

Moon, who is eager for peace with the North, has directed his administration to get Pyongyang and Washington back to the table.

Trump and Kim left Hanoi, Vietnam, after failing to bridge the gap between the North’s desire for relief from punishing economic sanctions and U.S. demands for complete denuclearization.

Trump, who has consistently cited the suspension of missile and nuclear tests as an indicator of diplomatic progress, said he would be disappointed if that happens.

In January, Coats welcomed the fact that the North had “halted its provocative behavior” with the testing moratorium.

But he told senators at an intelligence committee hearing that the communist state was “unlikely to completely give up its nuclear weapons” because it sees them as key to regime survival.

North Korea already has rebuilt a launch site that it had partially dismantled as part of disarmament steps last year, according to recent satellite images.

However, no new activity has been detected since the reconstruction was spotted at the Sohae Satellite Launching Station, according to the Washington, D.C.-based Center for Strategic and International Studies.

“There has been no activity of significance at the vertical engine test stand or launch pad since our last report,” which was on March 9, the think tank said Tuesday.