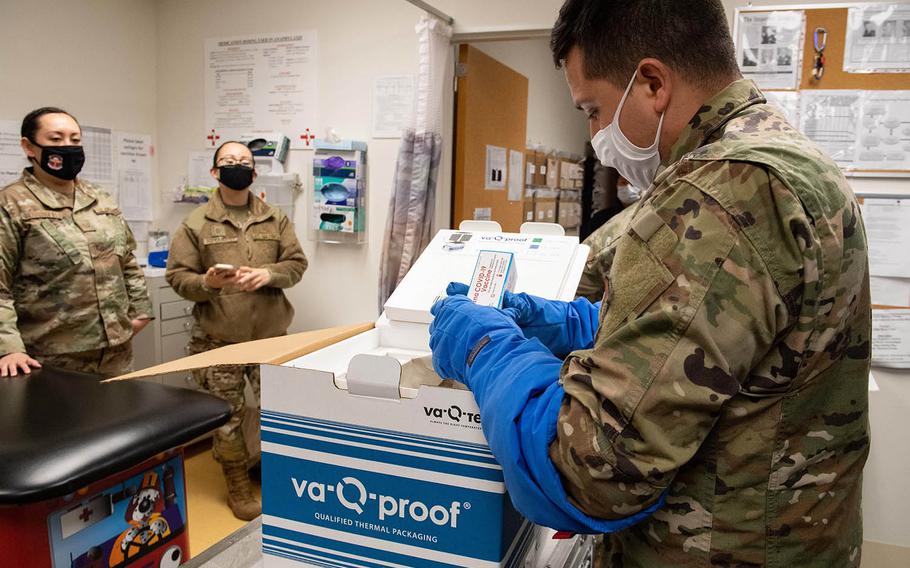 Yokota Air Base in western Tokyo, headquarters for U.S. Forces Japan and the 374th Airlift Wing, reported its delivery in a news release and a mid-afternoon Facebook post. Kadena Air Base on Okinawa, home of the 18th Wing, posted an announcement on Facebook later in the day.

The vaccine is administered in two doses about a month apart as protection against the respiratory disease caused by the coronavirus.

“Today, we received 800 doses and our plan to administer them is working through a structured tier system, which will make sure to prioritize our people appropriately,” Yokota quoted Capt. Alexander Tran, 374th Medical Group chief of in-patient pharmacy services, as saying.

Those first doses will be administered to first responders, public safety personnel and health care workers who volunteer to receive the vaccine, Tran said. Subjects must volunteer because the vaccine was approved by the U.S. Food and Drug Administration for emergency use.

“We’re currently trying to live out of a new normal, the COVID vaccine just helps us get to a better new normal,” Tran was quoted as saying.

“If we can be immunized and protected even more, then the possibility of reducing any severe symptoms of COVID for any of our base population is something that we want to aim towards, and this vaccine will help us to get there.”

“Prioritized personnel are highly encouraged to take the vaccine to protect their health, their families, and their community,” according to the base. It did not state how many doses it received.

Four other bases in Japan were also designated for Moderna deliveries by the Defense Department. The other four are Camp Foster on Okinawa, Yokosuka Naval Base and Camp Zama in Kanagawa prefecture and Misawa Air Base in northeast Japan. None of the four had announced receipt of the vaccine as of 7 p.m. Saturday.

The senior enlisted leader of USFJ, Chief Master Sgt. Richard Winegardner Jr., said during an interview on American Forces Network Radio on Wednesday that the vaccine should be available for general distribution by mid-2021 or earlier.

U.S. Army Gen. Robert Abrams, commander of U.S. Forces Korea, on Tuesday issued a statement saying he expected the same vaccine would arrive and be distributed to troops on the peninsula “over the next few days.”

Although many service members, civilian employees and their families enjoyed a four-day break, the virus took no holiday. U.S. military commands the length of Japan reported 19 newly infected patients between Thursday and 7 p.m. Saturday.

Marine Corps Air Station Iwakuni, 500 miles west of Tokyo, reported three individuals tested positive for the virus, one on Saturday and two on Friday, according to Facebook posts.

The base gave no information on the case Saturday except to say its health authorities were conducting “aggressive” contact tracing. It said the two discovered Thursday were already isolated after traveling to an unspecified high-risk area.

On Okinawa, 12 Marines on three bases tested positive over three days, according to Facebook posts by Marine Corps Installations Pacific.

Kadena Air Base reported two new cases Thursday, both individuals identified by mandatory testing while in quarantine due to recent travel outside Japan. An unspecified number of their close contacts were also quarantined following the tests, according to Kadena.ditzlerjoseph@stripes.comTwitter: @JosephDitzler