Message to GIs: They're not rude, they're just Koreans 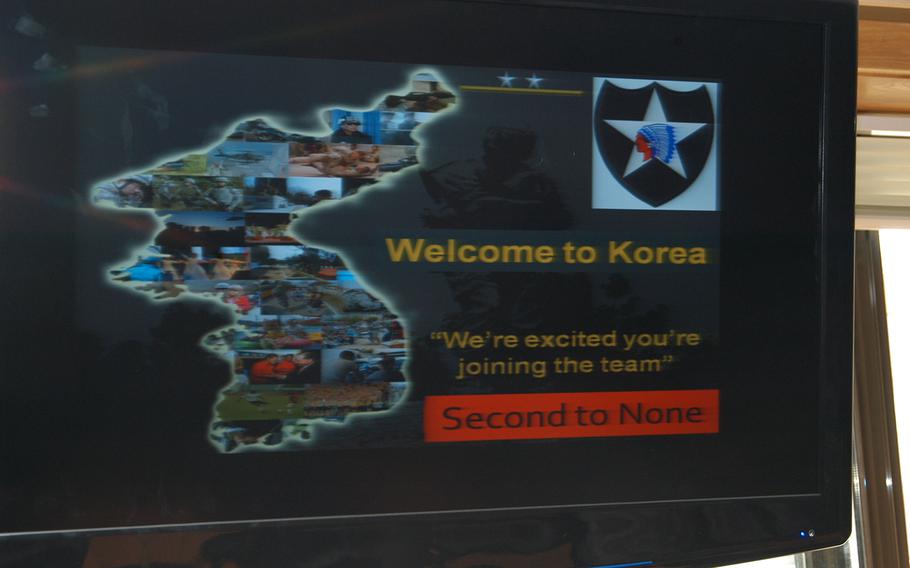 A slideshow begins recently for a group of newly arrived 2nd Infantry Division soldiers to Camp Hovey in South Korea, at the start of a cultural awareness training class April 19, 2013. (Jon Rabiroff/Stars and Stripes)

A slideshow begins recently for a group of newly arrived 2nd Infantry Division soldiers to Camp Hovey in South Korea, at the start of a cultural awareness training class April 19, 2013. (Jon Rabiroff/Stars and Stripes) 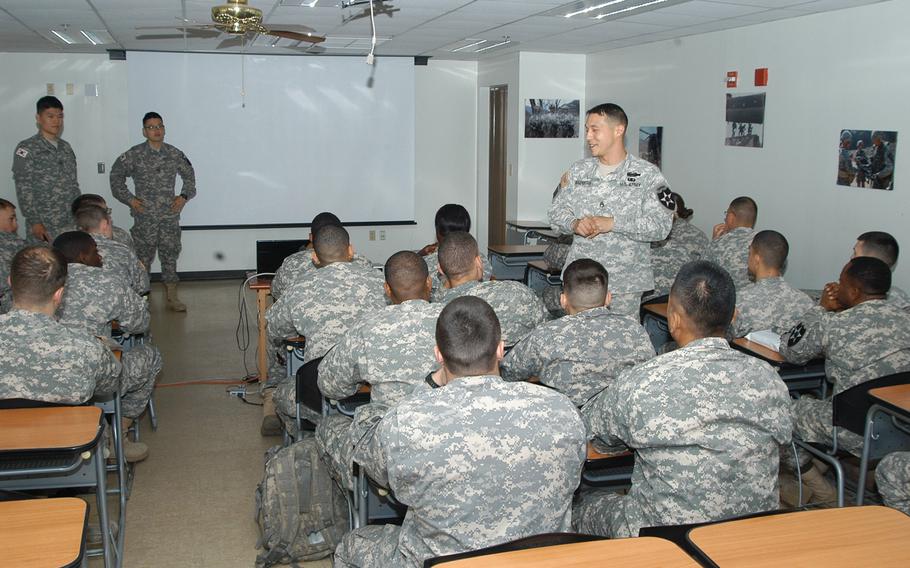 They will bump into others without apologizing, drive with little regard for traffic laws and often ignore well-meaning strangers trying to make small talk.

Those observations are being routinely shared with arriving U.S. soldiers — not to make them wary of South Koreans, but to help cut down on the kind of embarrassing headlines that have dogged the American military here in recent months.

The 2nd Infantry Division, which accounts for 10,000 of the 28,500 U.S. servicemembers in South Korea, recently expanded the cultural awareness training it gives its incoming troops in hopes that a better understanding of the local culture will eliminate misunderstandings that can sometimes lead to criminal incidents. In addition, the soldiers are being told about instances of American military misbehavior that had nothing to do with cultural differences — and the impact they have had on U.S.-South Korea relations — to give them a better understanding of the scrutiny that their actions will draw.

“In light of some of the incidents that have occurred here in Korea, we energized the program,” said Lt. Col. Eric Walker, Headquarters and Headquarters Battalion commander, adding that the training’s classroom-instruction element is now four hours, an increase of 90 minutes.

Soldiers are also told about some of the positive things the American military has done in South Korea, individually and collectively, including instances where servicemembers have come to the aid of Koreans in need and when units have raised money or donated time on community projects.

They are also told “some of the many ways and opportunities they can enrich the lives of our Korean neighbors during their tour,” 2ID spokesman Lt. Col. Joe Scrocca said.

Such balance is critical to the program.

Pfc. Yoo Ha-rim — a Korean augmentee to the U.S. Army who is one of the cultural awareness instructors — said he is not offended by any of the things incoming soldiers are told about the local populace.

“To tell them, ‘Oh, we are different,’ it doesn’t mean that something is better or not,” he said. “We tell them the differences, and sometimes it’s a positive thing.”

After recently going through the newly expanded program, Capt. Daniel Mow said, “The key thing about cultural awareness training in general is just making sure we’re keyed to the fact things are different (here) and we can’t assume … take umbrage and do something stupid.”

U.S. servicemembers new to South Korea have long been taught some basic information about their host nation. Lessons have covered Korean money, public transportation, history, language and customs. Visits to the Demilitarized Zone, military museums, Korean restaurants and shopping areas have been included as part of the orientation program.

But a recent string of confrontations between soldiers and Koreans that received national media attention here — capped by a St. Patrick’s Day weekend when five U.S. soldiers were in an early-morning brawl involving a knife outside a Dongducheon night club, and two others were involved in separate altercations with Korean police — prompted 2ID to revisit the training.

The division invited Gyeonggi Province officials to help expand the program, including a frank discussion of what led to some of the recent incidents, be it ignorance of the local culture, irresponsible drinking or something else.

“We discuss cases in which misunderstandings over cultural norms or acceptable behavior have escalated into incidents between soldiers and local Koreans,” Scrocca said. “We want to use these incidents as lessons learned to ensure similar incidents do not happen again in the future.”

For example, Staff. Sgt. Hun Lee Rosenberry — a cultural awareness training instructor — said soldiers are told that, while playing music loudly in public may be the norm in the U.S., “Over here, that’s not commonly accepted.”

“We try to explain to them that in public, in general, people are not as loud or as outgoing as we are,” he said. “Most people are quiet. I’m not saying they’re silent, but they don’t walk around playing loud music and advertising it. People will tell you to turn it down.”

One recent incident that drew national headlines involved a half-dozen U.S. soldiers who allegedly became abusive toward a young Korean woman who asked them to quiet down when they were playing music loudly and acting up on a subway train.

Walker said newly arrived soldiers are advised that servicemember behavior has been a hot topic since the 2002 deaths of two South Korean girls who were run over by a U.S. military vehicle near Dongducheon, triggering violent protests outside American bases.

“That honestly was a turning point … for the alliance between Korea and the U.S.,” he said.

Soldiers might be surprised to see how relatively minor incidents involving the U.S. military here are “blown up in the media,” Walker said. “Well, it’s because there’s a bigger context that they need to be aware of.”

One of the most commonly heard complaints from foreigners who move to South Korea is the tendency many locals have to not apologize, or even acknowledge, when they bump into others. Instructors tell soldiers it’s simply a “social trend” they should not take personally.

Mow said soldiers are told, “Especially in the Seoul area, where there’s 25 million people approximately in an area that’s very small … Just understand everybody’s going in all these different directions, someone’s going to bump into you (and) you can’t assume that they mean something by it.

“People have less personal space in public because there’s so many more people,” he said.

Many of the incidents involving U.S. servicemembers happen at bars, so incoming soldiers are advised to drink responsibly and not be surprised if some of their best pickup lines are greeted rudely by Koreans.

“It’s not like back home where you sit there and make small talk and expect to … find a date,” Rosenberry said. “(Koreans) might be shocked by it and they might remove themselves from the situation.

“We don’t want them to go out there and cause trouble by trying to flirt, in a sense … knowing in the States it can be friendly, and over here it can be considered rude or unwanted,” he added.

When it comes to driving, Rosenberry said U.S. soldiers are told to do as they were taught back home, not as they see while making their way around here.

“The way we drive is by the rules (we were taught) as Americans,” Rosenberry said. “Abide by all laws, because it is very important we keep a positive image, even when we’re on the road.”

Some of the other things taught to incoming soldiers during the 2ID’s cultural awareness training include:

• Anyone wearing a school uniform is underage. “We try to point that out, because we don’t need any trouble there,” Rosenberry said.

• Passengers are often being videotaped while in taxis, so they should behave themselves.

• Some public bathrooms don’t offer toilet paper, or only have it near the entrance, so it’s a good idea to carry some, just in case.

• Many Koreans have at least a basic understanding of English, so soldiers should watch what they say, and the language they use, in public.

Sgt. 1st Class David Flatray said he was glad instructors also emphasized some of the good things soldiers have done — and can do — in South Korea.

“It was nice to see, ‘Here’s the negative but, hey, here’s the positive,’ so you don’t feel like somebody’s telling you you’ve come here to fail,” he said.

Walker said a more intense three-day cultural awareness program soon will be offered every two weeks to 30 to 50 leaders to continue the 2ID “on the right path toward mitigating the likelihood of future incidents.”