Mattis: Thaw between North and South Korea should not distract from denuclearization 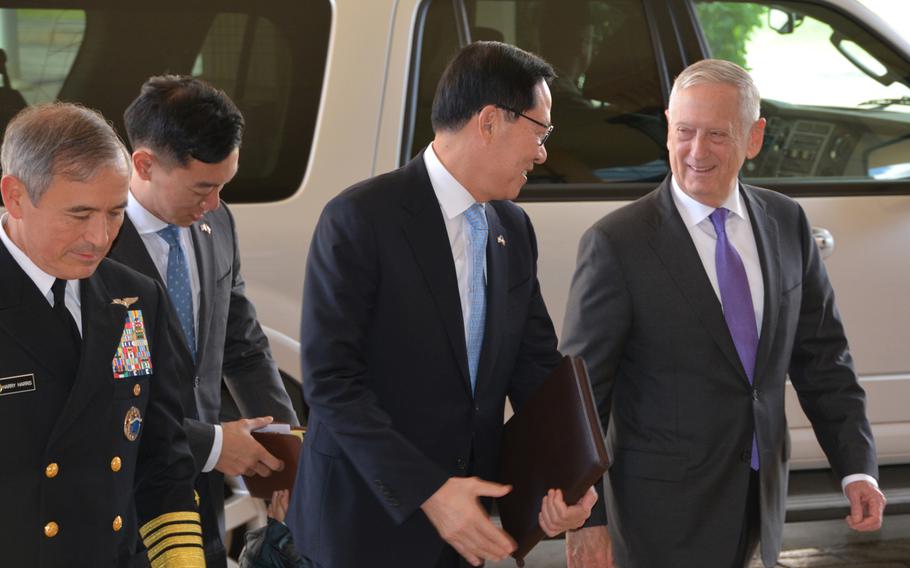 He made the remarks before meeting with his South Korean counterpart, Defense Minister Song Young-moo, at U.S. Pacific Command headquarters to discuss ensuring security surrounding the upcoming Winter Olympics in Pyeongchang, South Korea.

North Korea — formally called Democratic People’s Republic of Korea, or DPRK — initiated rare talks with the South earlier this month that quickly resulted in Pyongyang announcing it would send athletes to the games.

“As two peace-loving nations, [South Korea] and America welcome the Olympics Games talks between the [South] and the DPRK — at the same time remaining steadfast with the international economic pressure campaign to denuclearize the Korean Peninsula,” Mattis told reporters.

Last year, North Korea ramped up missile-testing and conducted its most powerful test of a nuclear weapon to date. Earlier this month, North Korean leader Kim Jong Un and President Donald Trump escalated tensions when they traded boasts about their nation’s nuclear arsenal.

“So we do not lose sight of the fact that the Olympics talks alone do not address overarching problems,” he said. “Accordingly, our combined militaries stand shoulder to shoulder to defend against any attacks on the [South] or USA.”

As a result of the talks, the U.S. will delay annual joint drills in South Korea until after the Olympics have wrapped up.

Song, a former South Korean navy admiral, became defense minister in July. In a phone conversation earlier this year, he and Mattis agreed to meet regularly in person, according to a statement from the South’s Ministry of National Defense.

Mattis’ stop in Hawaii — made while returning home from visits to Indonesia and Vietnam — was the first opportunity to do that.

Mattis described the relationship between the U.S. and South Korea as an “ironclad and irreplaceable alliance.”

Song told reporters that the discussion with Mattis would underscore “the firm coordination between [South Korea] and U.S. against North Korea in order to denuclearize the Korean Peninsula.”

He said the pair would also be “exchanging some of our opinions” about a statement by South Korean President Moon Jae-in that the inter-Korea talks will ultimately “draw out North Korea to a dialogue with the United States.”