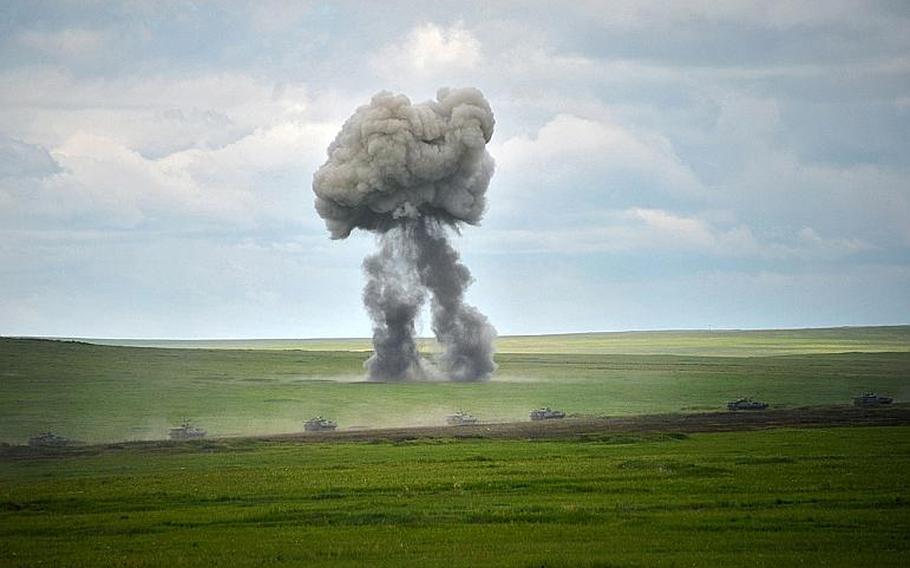 YOKOTA AIR BASE, Japan — When President Barack Obama announced the rebalancing of U.S. forces toward Asia in 2011, it was often called “the pivot to the Pacific.”

Russians, like Americans, are turning their attention to a region that’s home to half the global population, several of the largest and fastest-growing economies and some of the world’s busiest ports and shipping lanes.

“The Russians are interested in demonstrating that they are a player in Asia,” Ralph Cossa of the Pacific Forum in Hawaii said. “They don’t want to be ignored.”

The Russians are sending a clear message this month with massive land and sea maneuvers in Siberia and the Sea of Japan. Its biggest military exercise since the Soviet era involves 160,000 troops, 5,000 tanks, 130 aircraft and dozens of ships. Part of it simulates a response to a hypothetical attack by forces from Japan and the U.S. — nations that occupied parts of Siberia during the Russian Civil War in 1918-20.

The maneuvers come at a time when the U.S. rebalance has been undermined by defense budget cuts that have limited exercises with allies and reduced the readiness of forces in the region.

Russia also appears to be mirroring America’s “places not bases” policy that will see U.S. forces rotate to Australia and the Philippines on training missions. Last year, Moscow opened negotiations with Vietnam to allow the Russian Pacific Fleet to resupply at Cam Ranh Bay — home to a massive Soviet naval base in the years after the fall of Saigon.

But Russia’s military has been eroding for years, and it’s uncertain whether its forces in the Pacific are as capable as their Soviet-era predecessors, Cossa said.

“I don’t think there is a lot of power left in the Russian Pacific fleet,” he said.

During the Cold War, Russian aircraft carriers berthed in Vladivostok. These days, the naval force in the far east is limited to a large missile cruiser, several destroyers and a flotilla of nuclear and diesel-electric submarines. Russian officials have signaled plans to add new Mistral-class amphibious ships, cruisers and submarines in coming years.

The build-up in Vladivostok comes as the U.S. has announced plans to base 60 percent of its Navy in the Pacific.

“Russia is moving in the Pacific direction,” said Thomas Fedyszyn, a retired Navy captain who is a national security professor at the Naval War College in Newport, R.I. “I would expect to see more Russian naval activity in the Pacific.”

Russia’s most modern warships – two new Mistral-class amphibious assault ships under construction at French shipyards – will arrive in Vladivostok next year and in 2015, Fedyszyn said.

“A lot of experts are thinking the underlying issue is Japan and the Kurile Islands,” he said.

The Mistrals are equipped for humanitarian assistance missions but are designed for amphibious assaults on small islands and can carry Russian Naval Infantry — akin to U.S. Navy SEALS. A 3,000-strong contingent of naval Infantry is stationed in Vladivostok.

“The Russians will be slowly but steadily increasing their warfighting ability in that part of the world,” he said. “China is looking for a strategic partner since the U.S. seems to have no shortage in the region, including India. Russia doesn’t know if China is a friend or an enemy but Russia is a relatively powerful and available country that is also concerned about the American shift to the Pacific.”

Fedyszyn said he expects to see more of those flights as Russia seeks to gain respect in the Pacific.

Fiona Hill, director of the Center on the United States and Europe and a senior fellow at the Brookings Institution, described Russia’s renewed interest in the Pacific as “a response to the U.S.,” but she believes the recent military maneuvers are “bluster.”

Russia is recognizing the rise of China and doing the same thing as other nations: reacting to growth in the Asia-Pacific region.

“The Russians are desperately trying to figure out how to tap into the growth there,” she said.

Russia is seeking to build on a history of engagement in the Pacific that’s as long as Washington’s, Hill said.

Russia controlled territory on both sides of the ocean until the 1867 sale of “Russian America” (modern-day Alaska) to the U.S. for $7.2 million. Russian outposts were scattered around the region in the 19th century as the czars sought to establish their own version of Britain’s Hong Kong in China.

Russia fought and lost the Russo-Japanese War in 1904-05, and the Red Army invaded North Korea after declaring war on Japan again in the last days of World War II. The Soviet Union also aided communists – including North Korea and North Vietnam in wars against the U.S. and its allies in the Pacific.

“Now, the Russians are trying to figure out a way to build on those historical legacies there to make themselves a player,” Hill said.

A component of the U.S. Pacific pivot is greater diplomatic engagement in the region, with America boosting its presence at regional forums such as the Shangri-La security summit in Singapore. Russia has also been flying its flag at Pacific regional groupings, such as the East Asia Summit, Cossa said.

At times, Russian diplomats have worked in concert with America in the region. For example, Russia has signed on to harsh statements on North Korean aggression as a member of the G-8, he said.

“Just like with the U.S. Pacific pivot, there is more to what the Russians are doing than meets the eye in some respects and less in other,” Hill said.

Perhaps the most significant component of U.S. and Russian engagement in Asia is trade.

During the Cold War, Vladivostok was a “closed city,” so American strategists had to rely on satellite imagery to assess the strength of the forces stationed there, Cossa said.

Vladivostok hosted the Asia-Pacific Economic Cooperation summit last year. The city’s university, airport and seaport have been upgraded in an effort to attract foreign students, investors and manufacturing.

Russia has massive reserves of oil and gas in Siberia that it would like to sell to China. It’s building pipelines to pump gas to the Pacific coast, but negotiations with Beijing are moving slowly, even though conversion of coal-fired power plants to gas would reduce the thick smog that shrouds Chinese cities.

Cossa said the Russians he’s spoken with recently have complained about Chinese arrogance, putting it on a par with their long-held sentiment about Americans.

“It grates on them the way the Chinese take a condescending view of them now,” he said.

One reason why China is playing hardball is a desire to diversify energy supplies, Hill said.

It’s doing that successfully in central Asia, for example, where concerns about access for oil pipelines to Europe across Russian territory have evaporated. Now all the new pipelines are headed toward China, she said.

The Shanghai Cooperation Organization – a defense alliance involving several central Asian states along with Russia and China – is a way for Russia to come to grips with China’s influence in central Asia rather than something aimed at the U.S., Hill said.

The volume of Russia’s trade with China is not comparable to what China does with other nations. Russians sell weapons to China, knowing they will be reverse-engineered and fearing they could be used against them one day, Hill said.

An important factor in Russia’s relationship with Asia is likely to be a northern route to Europe that is expected to open up as Arctic ice melts with global warming.

The route, only open briefly each summer, has the potential to save time, fuel and money for shippers involved in the multibillion-dollar trade between Asia and Europe.

Russia has the world’s largest ice breaker fleet, but other nations are showing interest in the northern waters. China is building a second ice breaker and seeks to join the Artic Council, which represents eight nations - including the U.S. and Russia - with territory bordering the Arctic Circle.

However, Russia wants to use the council to limit any Chinese incursion into what will become international waters to its north, Hill said.

Disputes in the seas

Russia also has a long-standing territorial dispute with Japan. The Kurile Islands, once Japan’s northern territories, were occupied by the Russians at the end of World War II and never returned.

Russia seriously discussed returning the islands to Japan, for a price, after the fall of the Soviet Union in the early 1990s. But these days, the dispute is a useful way for Moscow to signal that it means business in the region, Hill said.

“Russia wants to make it clear that it is going to be in the game,” she said.

The rationale for moving Russia’s military focus to the Pacific is strong. There are few security concerns from Europe and major long-term concerns about China, Hill said.

Russians hope Chinese preoccupation with disputes in the seas to its south will distract from territorial aspirations to the north, Hill said.

Much of the territory where major Russian cities are located in the east was acquired from the Chinese Empire in the 19th century. The two nations fought skirmishes along a disputed 2,600-mile border in the 1960s.

“There are long-term concerns that China will start to wonder why it gave up territory to the Russian Empire” in the 19th century, Hill said. “The Russians are eyeing warily the Chinese military and monitoring the standoffs in the South China Sea.”

Despite the concerns, there are considerable advantages to Russia and China developing a strategic partnership in the region, chiefly as a counterbalance to the U.S., she said.

“We see attempts by them to coordinate policy positions in the United Nations and elsewhere,” she said. “There are global advantages to be had.”

The Russian military appears to be drawing closer to China’s People’s Liberation Army, which most experts see as the target of America’s rebalancing efforts.

Earlier this month, 19 warships and about 10 aircraft from Russia and China took part in the Joint Sea-2013 exercise in the Sea of Japan.

However, both nations see their relationships with the U.S. as at least as important as their bilateral links, Cossa said.

“The Russians would like the Chinese to be preoccupied elsewhere and have an investment in a good cooperative relationship with Russia,” she said. “Russia, Japan and the U.S. have a lot more in common in terms of long-term concerns in the Asia-Pacific.”

U.S. Forces Japan commander Gen. Sam Angelella said Thursday that he hadn’t seen any upswing in Russian military activity in the Pacific but that the recent exercises involving Russia and China are of interest to his command.

Angelella, who visited Moscow when he was assigned to the U.S. Pacific Command, said he doesn’t have official contact with the Russian military in his current role but added: “The more open we all are -- the more we do things together with Russia, with China -- the better off we will be.”