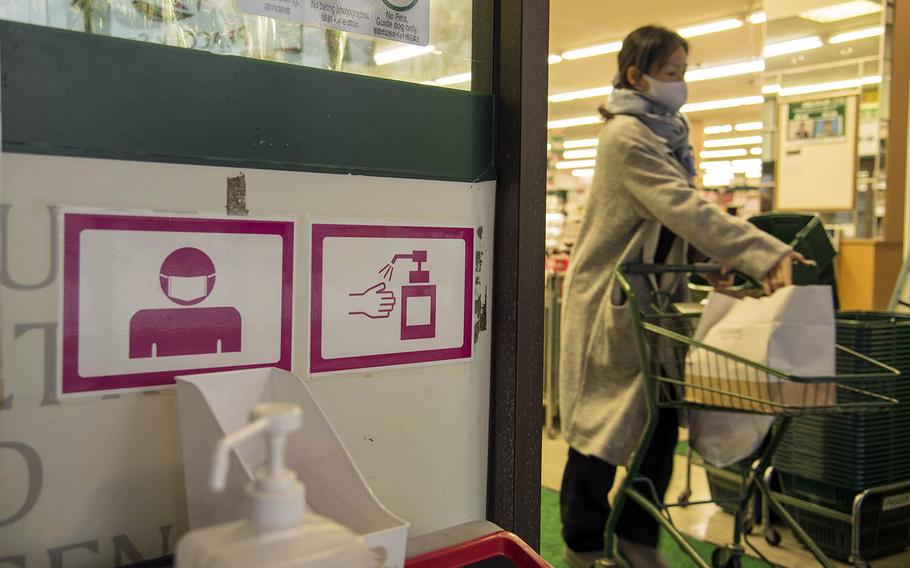 TOKYO – The U.S. military in Japan confirmed 45 new coronavirus cases over the weekend and Monday, including 27 infections at Marine Corps bases on Okinawa.

Late Monday, Kadena Air Base on Okinawa reported four people tested positive, including three members of the same family with symptoms of COVID-19, the respiratory disease caused by the virus, according to a base Facebook post. One of those people is associated with Kadena High School, and the school on Monday night canceled eight classes for Tuesday, according to an announcement on the school Facebook page by Principal Kristopher R. Kwiatek. "I know there are a lot of unknowns and I assure you I will provide updated information tomorrow," Kwiatek wrote in an accompanying post. The fourth individual was already in quarantine because a family member had become infected, according to the base. Sunday, Kadena reported a patient connected with another school on base, Kadena Elementary. That person was also in quarantine after a family member tested positive Thursday, according to the base. Kadena Elementary School Principal David Ballestros-Burkett, in a letter Sunday to families and staff, said public health authorities at Kadena “determined it is safe for our school to continue with normal operations” on Monday. In total, Kadena reported nine new coronavirus patients between Friday night and Monday night. U.S. Army Japan reported nine people tested positive for the virus between Wednesday and Friday, five of them already in quarantine on Okinawa as close contacts of another individual with the virus, according to an Army press release Monday.

Two more individuals with the Army became ill and tested positive Thursday. A family member of one of those patients, who is on Japan’s largest island, Honshu, also tested positive but has no symptoms, according to the Army.

The ninth individual, a new arrival to Japan, tested positive Thursday in quarantine. That person first tested negative upon arriving in the country Nov. 23 in a test administered by Japanese health authorities.

The Army did not specify where its cases are stationed. It has a garrison at Torii Station, Okinawa, and its headquarters at Camp Zama, west of Tokyo, on Honshu.

On Monday, the Corps added another six infections: four at Foster and one each at Hansen, Schwab and MCAS Futenma, according to a Facebook post.

The Marines are experiencing a surge of coronavirus cases it hasn’t seen since August. The service had ceased publicly reporting new infections in early November, with one exception, a cluster of 72 cases among new arrivals from the United States it reported Nov. 30.

The Marines did not specify in its recent posts whether the individuals tested positive upon arrival from the U.S. or in the mandatory two-week quarantine for new arrivals, or whether they acquired the virus locally or from close contact with previously identified individuals.

On Friday, the Marines reported 11 individuals tested positive: eight at Foster, and one each at Schwab, Hansen and Futenma, according to the installations command.

On Saturday, another report confirmed four new cases each at Schwab and Foster. On Sunday, the Corps reported six cases, two at Hansen and four at Foster.

The Marines were struck by a mid-summer outbreak that produced more than 300 confirmed coronavirus cases. In September, they reported six new cases and none in October.

Kadena on Sunday reported two more people were infected aside from the patient at the elementary school. A second patient was already quarantined as a close contact. The third individual self-isolated Nov. 30 after experiencing symptoms of COVID-19, the respiratory disease caused by the coronavirus.

That person last worked on Nov. 25 and has had no contact with base personnel since then, according to the base Facebook post Sunday. It did not specify where the individual worked.

Late Friday, Kadena via a Facebook post reported two new infections. Both became ill and isolated themselves before testing positive, according to the base.

One, a cashier at the Kadena exchange, last worked on Nov. 30. Contact tracers quarantined an undisclosed number of people who had close contact with the cashier, according to the base. Kadena did not provide further information about the second case Friday.