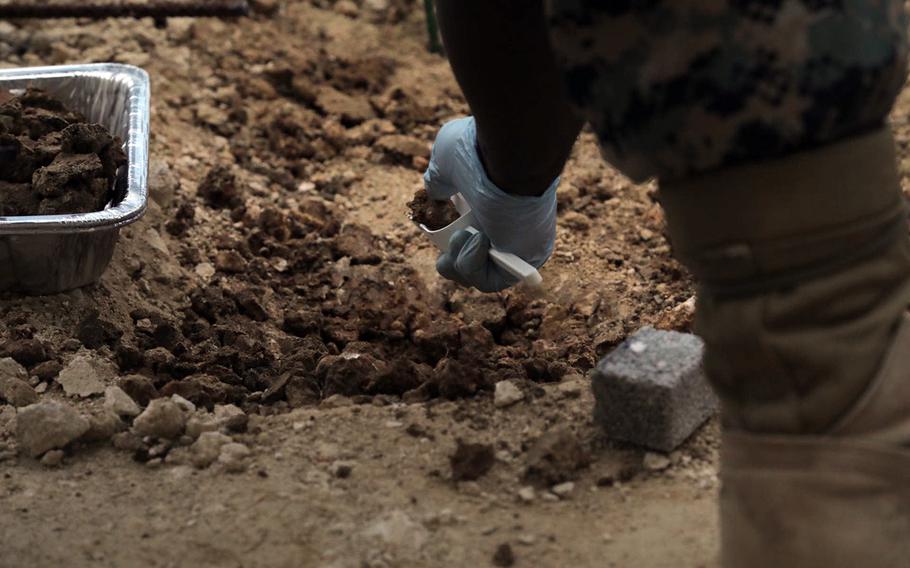 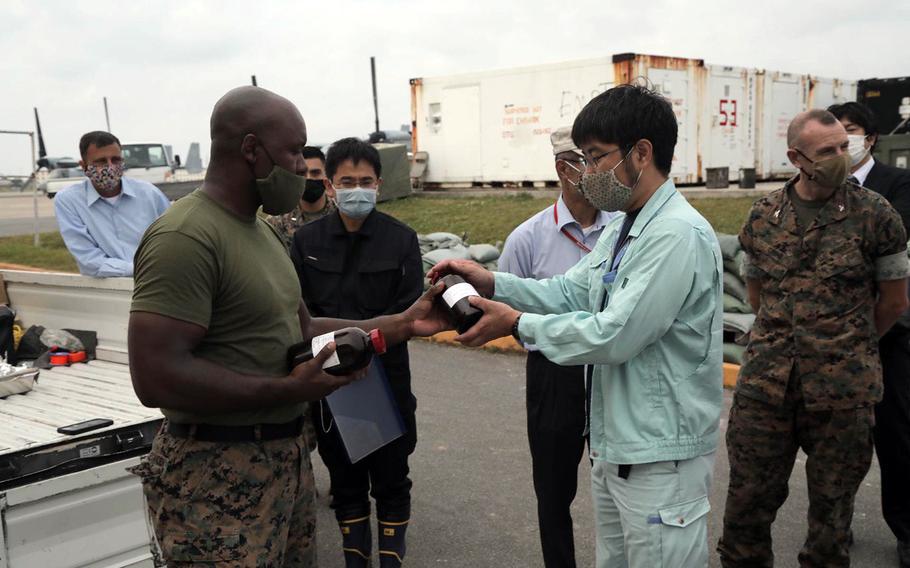 The samples were taken May 1 at Marine Corps Air Station Futenma in the same area near a hangar where the Marines removed potentially contaminated soil on April 24.

“This was the first time we were allowed to collect water and soil samples per the supplemental agreement for environment stewardship,” a spokesman for Okinawa prefecture said Thursday. “We wanted to make sure the area beneath where the Marines removed soil was not contaminated, so we were glad to collect the soil to test it.”

The U.S. and Japan signed the stewardship agreement in 2015. The Japanese collected the water samples from the base drainage system on April 21.

Some government officials in Japan customarily speak on condition of anonymity as part of their employment.

To collect the soil samples, Marines escorted nine officials from the Japanese, Okinawa prefectural and Ginowan city governments to the spill site, an aircraft hangar south of the runway, the prefectural spokesman said Thursday.

The Marines and officials from the prefectural and Japanese governments each collected just over a pound of soil at five locations to test for pollutants banned in Japan, the prefectural spokesman said.

They watched Marines dig up the soil, the prefectural spokesman said. The samples were bottled and labeled and handed over to the Japanese officials.

Prefectural officials asked the Marines for additional samples in other areas but were denied, the prefectural spokesman said.

“We were not totally satisfied, but we have to give the Marines a certain amount of credit for honoring the agreement,” he said. “The lab told us the soil is very difficult to analyze so it will take a month and half to get the result, but we are trying to get the result as soon as possible.”

PFOS, or perfluorooctanesulfonic acid, and PFOA, perfluorooctanoic acid, which are found in firefighting foam and a host of other products, are known to cause tumors, increases in body and organ weight and death in animals.

U.S. military officials in Japan have said the foam used at Futenma contains PFOS and PFOA.

The April 10 spill occurred after something triggered a fire-suppression system inside the hangar, officials said earlier this month. U.S. military officials have said the spill was an accident.

Of the approximately 60,000 gallons spilled, 22,000 gallons were contained on MCAS Futenma. The remainder traveled off base through a storm drain and into a nearby stream and neighborhood.