Marines gear up to operate on Australia’s amphibious warships 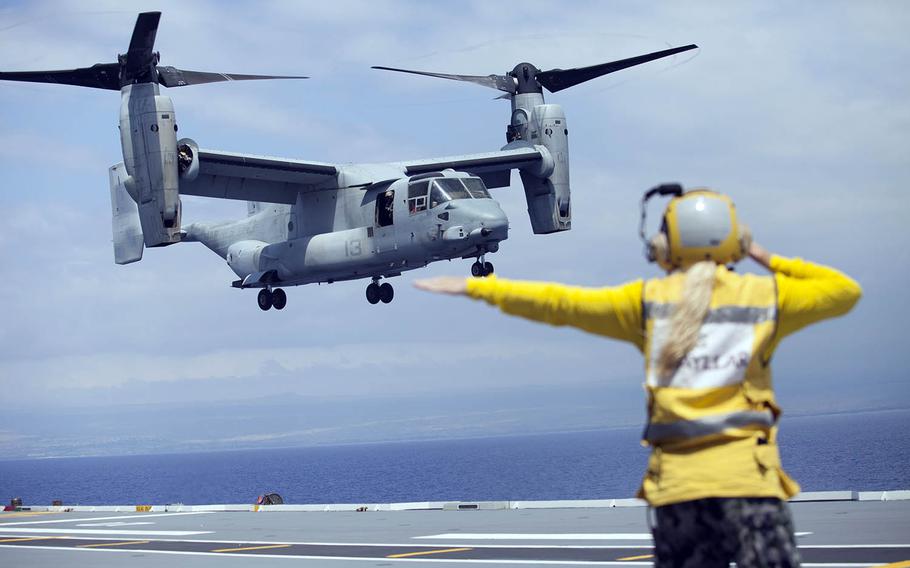 An Australian sailor guides a U.S. MV-22B Osprey as it takes off from HMAS Canberra in the Pacific Ocean, July 13, 2016. (Courtesy of the U.S. Marine Corps)

The Marine Corps is learning to operate with Australia’s amphibious warships and will embed 40 logisticians on the HMAS Adelaide during summer’s Rim of the Pacific exercise in Hawaii, according to the commander of U.S. rotational forces Down Under.

Marine Corps Ospreys have already landed on the $3 billion mini-aircraft carriers, which are capable of handling more than 1,000 troops, 100 vehicles and up to 18 helicopters.

The rotational force in Darwin is working toward embarking a company of Marines on the Australian amphibs, Schnelle said.

“There’s preparation toward where we would have a portion of Marine Rotational Force — Darwin embarked on [a landing helicopter dock ship],” he said.

One of the vessels could eventually serve as a platform for a disaster-response drill involving U.S. and Australian forces, he added.

The Marines in Darwin will work with three Australian army brigades this year, Schnelle said.

“There’s going to be an amphibious capability within each of their brigades,” he said. “It’s a natural relationship for the U.S. Marine Corps.”

Amphibious forces could be key to victory in any conflict in the Western Pacific, where China is aggressively expanding its territory by occupying small islets, reclaiming land and building military facilities in the South China Sea.

Earlier this month, three Australian warships – HMAS Anzac, HMAS Toowoomba and HMAS Success – were confronted by the People’s Liberation Army in the sea while bound for Vietnam.

Australian Prime Minister Malcolm Turnbull warned the Chinese this week that his Navy wouldn’t be stopped from asserting a “right of freedom of navigation throughout the world’s oceans,” according to The Australian newspaper.