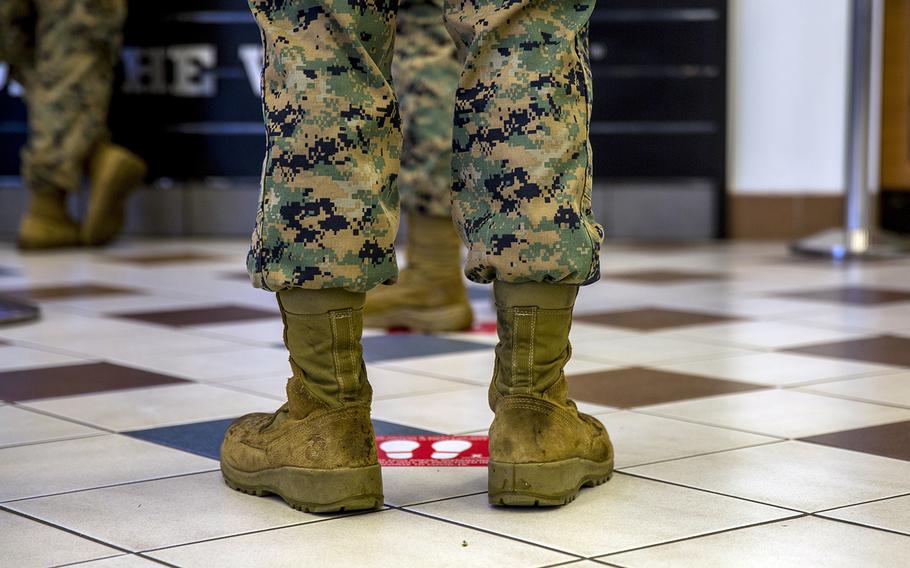 A Marine stands behind a social distancing floor marker while waiting in line at the exchange at Camp Hansen, Okinawa, April 7, 2020. (Kindo Go/U.S. Marine Corps)

CAMP FOSTER, Okinawa – The Navy and Marine Corps in Japan moved Thursday to isolate and track coronavirus cases that have popped up on their installations on Okinawa and just outside Tokyo.

Meanwhile, the governor of Tokyo reported 224 new infections in the metro area Thursday, a surge that exceeded the previous high of 206 on April 17.

For a second time this week, an undisclosed number of people associated with the Marine Corps on Okinawa tested positive for the virus, adding to the number of cases there, according to a Thursday news release from Marine Corps Installations Pacific.

“Just to protect the community and make sure that we prevent the spread, the skipper elected to go to shelter-in-place while it is investigated,” said spokesman Howard Samuelson.

In Tokyo, the 224 new cases are the highest daily number since the outbreak began, Gov. Yuriko Koike said during a meeting of the city’s coronavirus response headquarters. Tokyo has been generally off-limits to U.S. troops, Defense Department civilian employees and their families.

On Okinawa, the Marines on Thursday would not specify how many people tested positive, only that they fell under the status of forces agreement and were on installations that comprise the widespread Marine Corps Base Camp Smedley D. Butler.

Camp Hansen was on lockdown overnight from 10:43 p.m. Wednesday to 9:22 a.m. Thursday to allow contact tracing and cleaning, according to the Marine release Thursday.

It did not specifically tie Hansen to the new coronavirus cases. The infected individuals were quarantined, the release said.

However, the Okinawa Defense Bureau is gathering information on Japanese employees at Hansen and Marine Corps Air Station Futenma who may have had contact with the affected U.S. personnel, according to a bureau spokesman.

Government spokespeople in Japan frequently speak anonymously as a condition of their employment.

The latest cases’ movements are being traced to determine if they had contact with locals, an Okinawa prefectural spokesman told Stars and Stripes by phone Thursday.

MCAS Futenma was locked down for four hours Tuesday after “several” people there tested positive for the coronavirus; those individuals were also isolated, according to the Marines.

“These measures are put in place to ensure the safety and well-being of our forces, families and our Okinawa neighbors,” Thursday’s release stated. “We are taking all measures to prevent the further spread of COVID-19,” the respiratory disease caused by the coronavirus.

The Marines will make no further statements about new coronavirus cases to the media, Thursday’s release stated, in keeping with Esper’s instructions “and to protect the privacy of those affected by COVID-19.”

As of Wednesday, the Japan Ministry of Health, Labour and Welfare has tallied 20,371 cases of the coronavirus and 981 deaths.

On Wednesday, Okinawa confirmed its first positive coronavirus case in its population since April 30, a man in his 40s who had traveled to Japan’s main islands.

The Okinawa Times reported that the island confirmed another off-base case Thursday. A woman in her 20s from Tokyo tested positive while traveling on Okinawa.

The prefectural government reported two cases Wednesday, each contracting the virus outside of Okinawa, the newspaper reported.