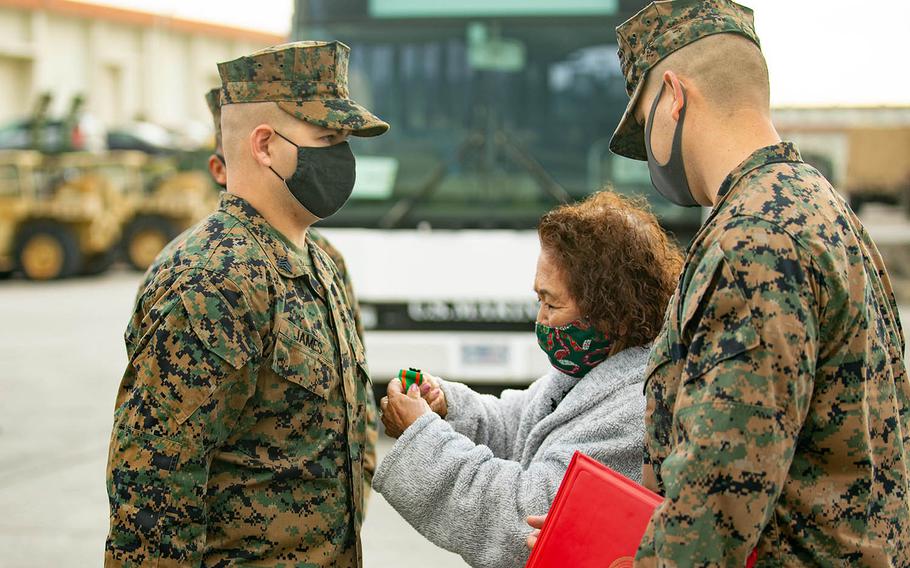 Sgt. John James is awarded the Navy Achievement Medal by Tokiko Ahuso, whom James assisted after she was bitten by a snake on Okinawa. The ceremony took place at Camp Hansen, Okinawa, Japan, on Dec. 23, 2020. (Brandon Salas/U.S. Marine Corps)

CAMP FOSTER, Okinawa — An Okinawa-based Marine who rendered aid to a local woman after she was bitten by a venomous habu snake has received a medal for his lifesaving actions.

Sgt. John James, a motor vehicle operator from Combat Logistics Battalion 31, was awarded the Navy Achievement Medal during a ceremony at Camp Hansen on Dec. 23, according to an email Monday from 1st Lt. Stephanie Murphy, spokeswoman for the 31st Marine Expeditionary Unit.

James, a native of DuBois, Neb., was barbecuing with friends at the Saloon bar in Kin town on Nov. 6 when he heard Ahuso’s screams, the Marines said previously. He rushed to her aid to find she had been bitten by a venomous snake. He fastened a tourniquet above the wound.

“We were grilling burgers and hot dogs and suddenly we heard an elderly woman screaming in a language we didn’t understand,” James said, according to the previous statement. “We didn’t know what was wrong until she started screaming out ‘habu, habu.’”

They credited James’ quick actions with saving the woman’s life, Marine officials said previously. Ahuso recovered quickly and was able to go back to work within a few days of the incident.

On the day James was awarded the medal, Ahuso and her daughter Hirono Ikehara received a tour of the Joint Light Tactical Vehicles that James works on, according to the Murphy’s email to Stars and Stripes.

The Navy Achievement Medal is awarded to service members below the rank of colonel for meritorious service or achievement in combat or noncombat, according to an Army fact sheet. The medal can either be used to recognize sustained performance or a specific achievement that does not warrant a higher award.

Up to 50 people on Okinawa — most often farmers or farmworkers — are bitten each year by one of the four varieties of habu on Okinawa. Their venom is hemotoxic, destroying blood cells and tissues, according to the Okinawa Institute of Science and Technology Graduate University’s website. Snakebite antivenom is available but the bites can be painful and cause permanent tissue damage.

Less than 1% of those bitten by a habu die, according to a 2013 statement from the U.S. Naval Hospital Okinawa. The snakes are most active September through November.