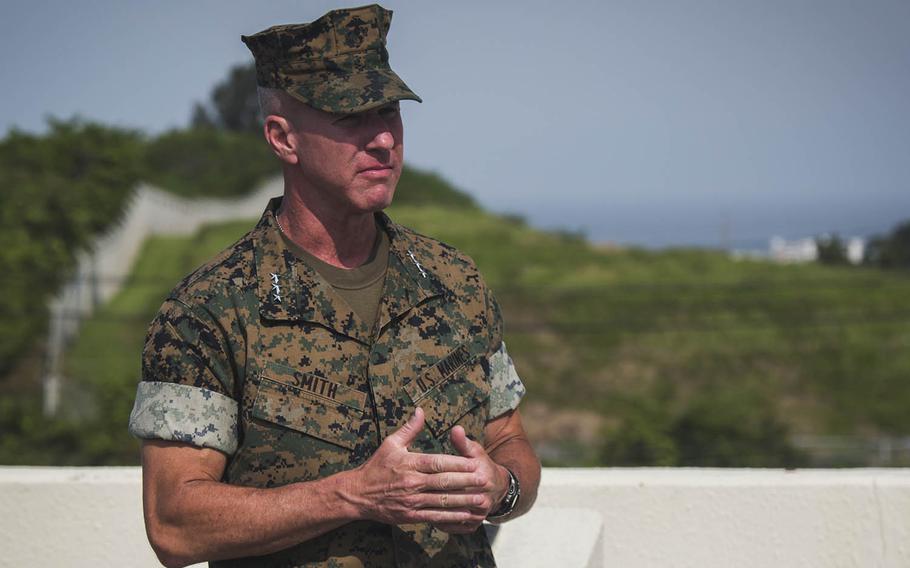 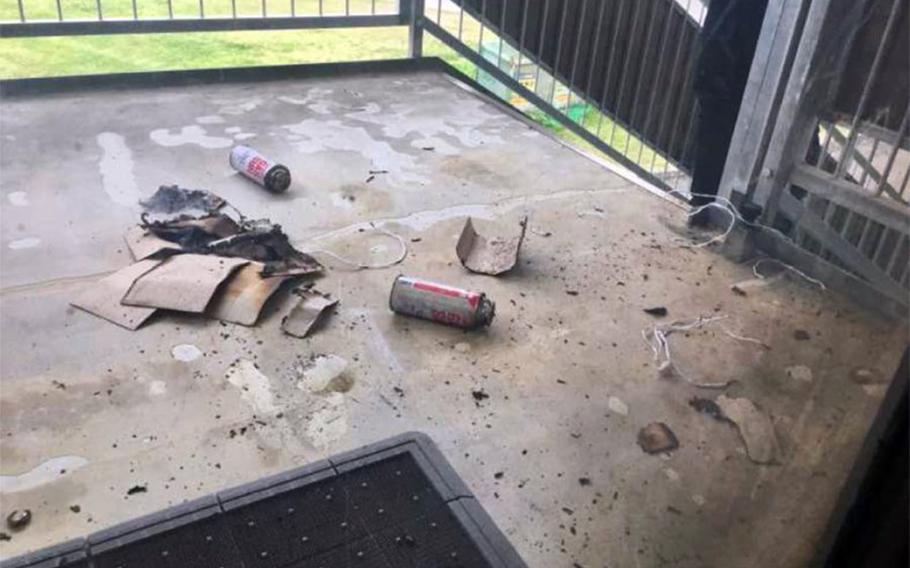 Someone used cassette gas canisters to cause an explosion at Camp Foster, Okinawa, Sunday, March 24, 2019. (Courtesy of Okinawa Defense Bureau) 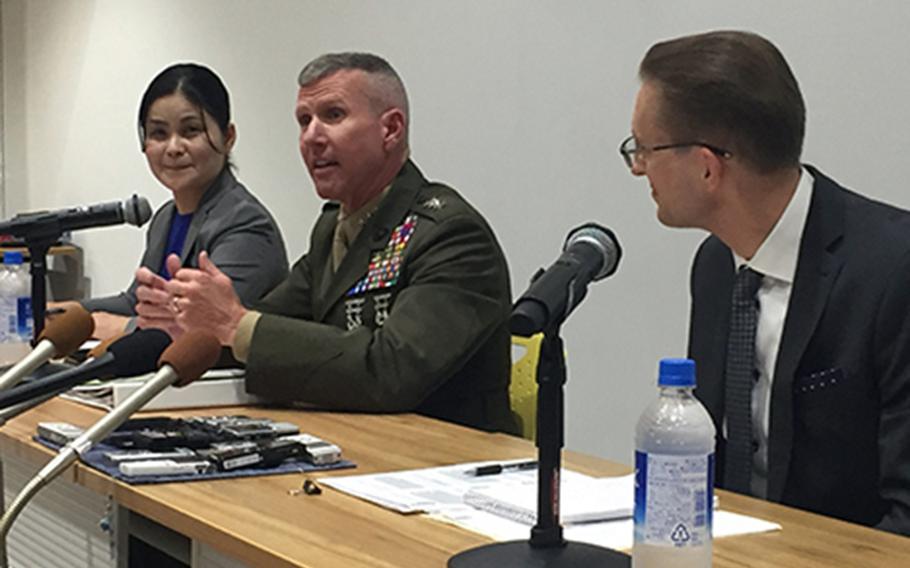 URASOE, Okinawa — A Marine official is asking the public for help in apprehending those responsible for breaking into Camp Foster on March 24 and detonating an incendiary device outside a building that houses Japanese government officials.

The appeal was made Thursday by III Marine Expeditionary Force commander Lt. Gen. Eric Smith at a press conference in Urasoe.

No injuries were reported in the small explosion and Okinawa police said Friday they have no suspects in the case.

“I would take this opportunity to thank [Okinawa police] and to call out those who perpetrated it as cowardly, as dangerous criminals, who have no regard for the children who ride their bicycles near those facilities,” Smith said. “… There’s a shrine right next to that facility — there’s a shrine near there, and they ignited a butane can near a shrine; that’s unacceptable.”

“So, I would use this opportunity to just ask anyone, any of your readers, who might know something, to please notify the police so we can take a very dangerous criminal or criminals off of the streets of Okinawa,” he said.

Police officials declined to say whether they believe the blast is tied to Okinawan protest groups fighting to stop the relocation of Marine Corps Air Station Futenma within the prefecture.

However, it is not the first such incident and it happened just days after Japanese Defense Minister Takeshi Iwaya announced that new landfill work would begin for a controversial runway at Camp Schwab in the northern part of the island.

The runway being built into Oura Bay will one day allow for the closure of Marine Corps Air Station Futenma and the relocation of Marine air assets to Schwab.

The issue has been contentious for over a decade as Tokyo pushes ahead with construction despite opposition from Okinawan voters. Seventy-two percent of voters who turned out for a referendum on the project last month voted against it.

Smith condemned the explosion as out of synch with Okinawa culture.

“That conduct is so far removed from Okinawan culture, which is gracious, courteous, orderly, respectful,” he said. “It’s everything that Okinawa is not.”

The incident occurred at about 6 p.m. March 24 outside Camp Foster’s Okinawa Defense Bureau office, according to a bureau spokesman. The bureau represents Japan’s Ministry of Defense on the island.

The office is in a remote compound across a road from the main base. It’s unclear if anyone was inside at the time. The building is in a high pedestrian traffic area, between a popular downtown area, the base and base housing.

Bureau and Marine officials declined to provide details on damages.

Anti-military vandalism incidents aren’t uncommon on the island. On the evening of Dec. 22, someone spray painted a security camera, broke a window and threw a flare into the Okinawa Provincial Cooperation Office in Maejima, Naha. The Okinawa Provincial Cooperation Office is a recruitment facility for the Japan Self-Defense Force and also houses the Naha office of the Okinawa Defense Bureau.

No injuries were reported, but the flare ignited a bed on the first floor, Okinawa Fire Department West District spokesman Toshihiro Kuniyoshi said at the time.

In that case, relocation protester Motohiro Imanaka, 69, from Osaka prefecture was charged with arson March 18, the Sankei newspaper reported. He was already in custody for protest-related property damage at the time.