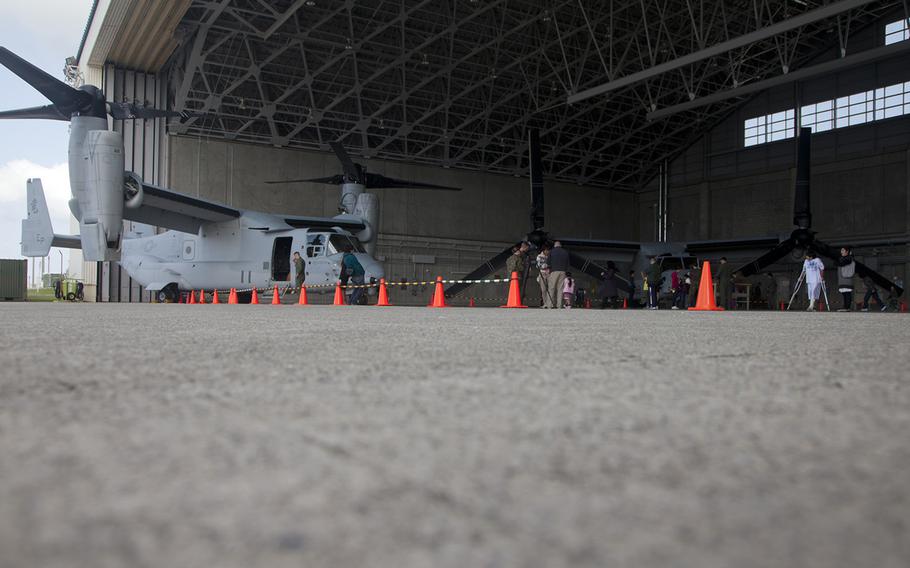 CAMP FOSTER, Okinawa — A Marine general apologized Friday to a vice-governor of Okinawa for an April 10 spill of 38,000 gallons of potentially toxic firefighting foam from an air station into a nearby stream and neighborhood.

The leak occurred after something triggered a fire-suppression system inside a hangar at Marine Corps Air Station Futenma and the foam traveled off base through a storm drain, the Marines said in a statement Friday.

Okinawa Vice-Governor Kiichiro Jahana toured the scene of the spill at MCAS Futenma on Friday and was briefed by Marines on what had occurred, the cleanup response and efforts to prevent future spills, according to a Marine statement.

Jahana’s visit started with an apology from Bowers.

“We apologize that this incident has caused trouble for local residents,” the general said, according to the statement. “A senior Marine colonel is conducting a thorough investigation to determine the cause of the spill. When the investigation concludes and based upon the recommendations in the final report, we will implement measures to reduce the likelihood of similar incidents in the future.”

Of the approximately 60,000 gallons spilled, 22,000 gallons were contained on the base, an Okinawa Defense Bureau spokesman said Wednesday. The bureau represents Japan’s Ministry of Defense on the island.

“If the U.S. grants base access, we will send an investigation team to find out the cause [of the spill] then go from there,” another defense spokesman said Wednesday.

Defense Minister Taro Kono on Tuesday told reporters: “We may ask the U.S. to pay for the damage later.”

The synthetic, fully fluorinated organic acids are also found in aircraft grease, water-repellant materials, cleaning agents and other products. They have been known to cause tumors, increases in body and organ weight and death in animals.

An unknown quantity of the foam reached Uchidomari River near MCAS Futenma, according to a letter sent Tuesday by Ginowan city Mayor Masanori Matsukawa to the commander of III Marine Expeditionary Force. Uchidomari is not a source of drinking water for the city.

“It’s a huge problem because if the leak had happened within our water supply river, we would have had to close the intake and cut the water supply to our people,” a spokesman for the Okinawa Prefectural Enterprise Bureau, which oversees water quality, said Wednesday. It’s customary for some government officials in Japan to speak on condition of anonymity.

Ginowan city firefighters responded to the Kakazu neighborhood where they saw large amounts of foam floating on Uchidomari River, a department spokesman said Friday. The foam was picked up by a strong easterly wind and covered “everything,” including homes.

The firefighters turned the foam over to the base so it could be discarded, the defense bureau spokesman said.

Bureau personnel were also dispatched to a day care center in Ginowan’s Ojana neighborhood to clean playground equipment and block off a sandbox that had been contaminated.

Ginowan’s mayor said in his letter he was angered that the Marines did not perform the off-base cleanup.

Kono, the nation’s defense minister, said he, too, wished they had taken “necessary” action and called for discussions on the future use of firefighting foam containing the compounds.