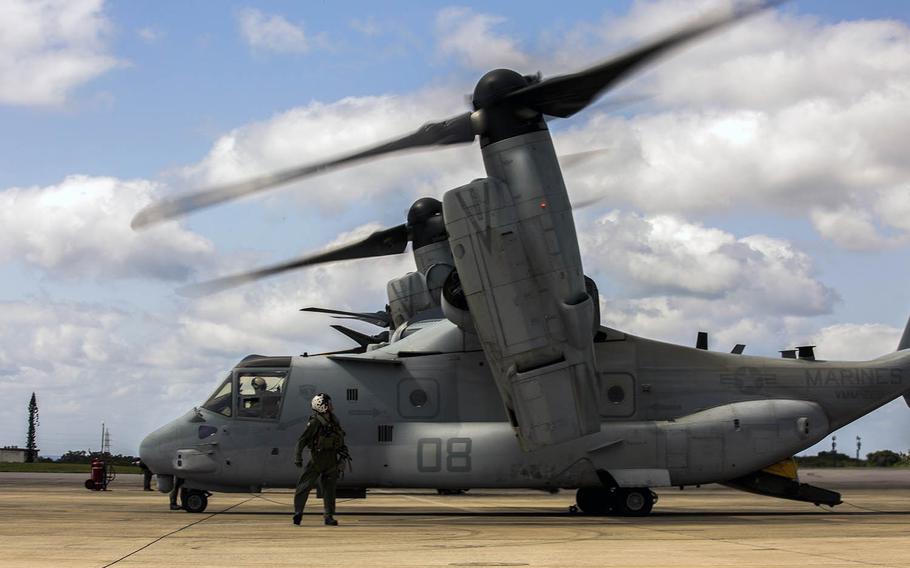 Four Hawaii-based MV-22B Ospreys island-hopped their way home across the Pacific Ocean this month, just the third time the tiltrotor aircraft has made the long over-the-ocean journey, according to the Marine Corps.

The Ospreys, assigned to Marine Medium Tiltrotor Squadron 268 and fresh from taking part in this year’s Balikatan exercise in the Philippines, left Okinawa and touched down May 2 at Marine Corps Base Kaneohe Bay, their home station.

The trip covered 5,300 nautical miles and required refueling from KC-130J Hercules aerial tankers. The Osprey crews also made “minimal, scheduled stops to refuel and rest,” according to a Marine Corps statement May 3.

“The [trans-Pacific] is the longest flight I’ve ever completed in an Osprey,” said Maj. Joe Raines, section leader responsible for planning, briefing and leading two of the aircraft to Hawaii, in an email Wednesday to Stars and Stripes. “It took roughly 22 hours of total flight time to complete, over multiple legs.”

Raines has completed this flight three times and this time around trained junior pilots for future journeys across this long distance.

Two years ago the squadron made the first trans-Pacific flight by Ospreys. Last September, eight of the squadron’s aircraft made a three-day flight from Darwin, Australia, to Hawaii.

“This is a strategic flight that shows we can deploy to any location throughout the western Pacific at any time,” Raines said. “We are capable of self-deploying and aggregating to a crisis, natural or man-made, and provide combat power to assist our allies in the region.”

The Osprey, made by Bell Helicopter and Boeing, is powered by two Rolls-Royce engines that deliver 6,200 shaft horsepower. It can cruise at 280 knots and has a range of 860 nautical miles, according to a Navy online “Fact File.”

In addition to a crew of three, the Osprey can carry 24 troops.

The aircraft combines the vertical takeoff and landing ability of a helicopter with the speed and range of fixed-wing aircraft.

The Pacific flights are among the longest the Osprey undertakes and demonstrates its ability to get where it’s needed within hours, according to the Marine Corps.

“The flight was difficult, but we prepared and executed confidently,” Mount said in an email. “Each time it has been a nervous but incredible experience.”

Raines and Mount said they were both focused and engaged throughout the long trek across the vast ocean. They said they were proud to be part of each flight.

“The trans-Pacific flights conducted by us here have shrunk the theater significantly, allowing the Marine Corps to aggregate combat force in the western Pacific from Hawaii in a matter of days,” Raines said. “U.S. Marine Corps Forces in Hawaii are now part of the strategic calculus in a ‘fight tonight’ scenario.”