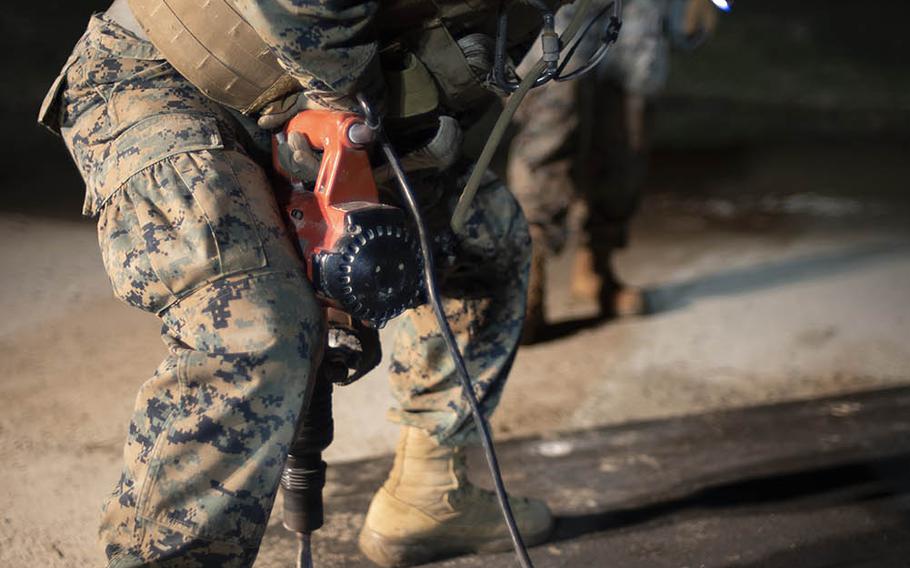 Buy Photo
A combat engineer from Marine Wing Support Squadron 171 uses a hammer drill to secure a fiberglass panel to a concrete pad to cover up damage from a simulated missile strike during an exercise at Marine Corps Air Station Iwakuni, Japan, Oct. 29, 2020. (James Bolinger/Stars and Stripes)

Buy Photo
A combat engineer from Marine Wing Support Squadron 171 uses a hammer drill to secure a fiberglass panel to a concrete pad to cover up damage from a simulated missile strike during an exercise at Marine Corps Air Station Iwakuni, Japan, Oct. 29, 2020. (James Bolinger/Stars and Stripes) 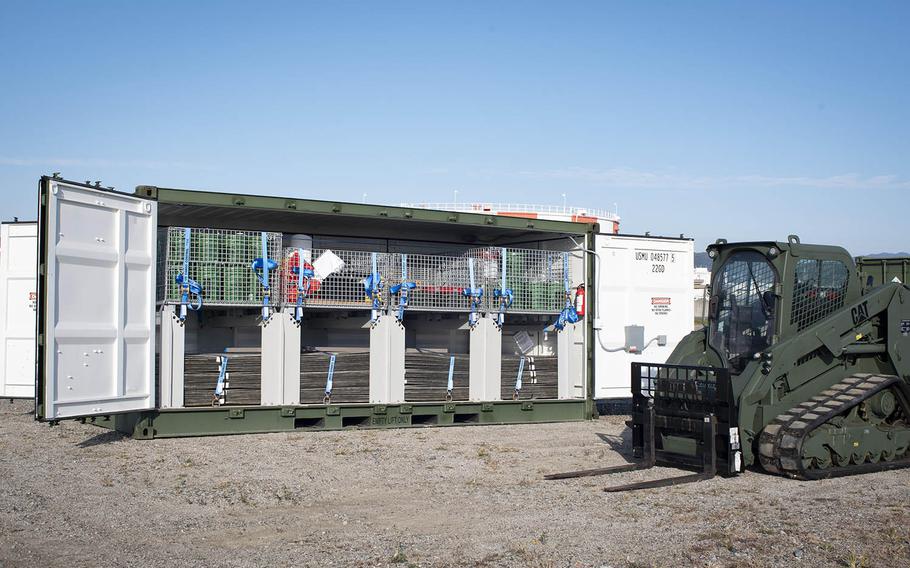 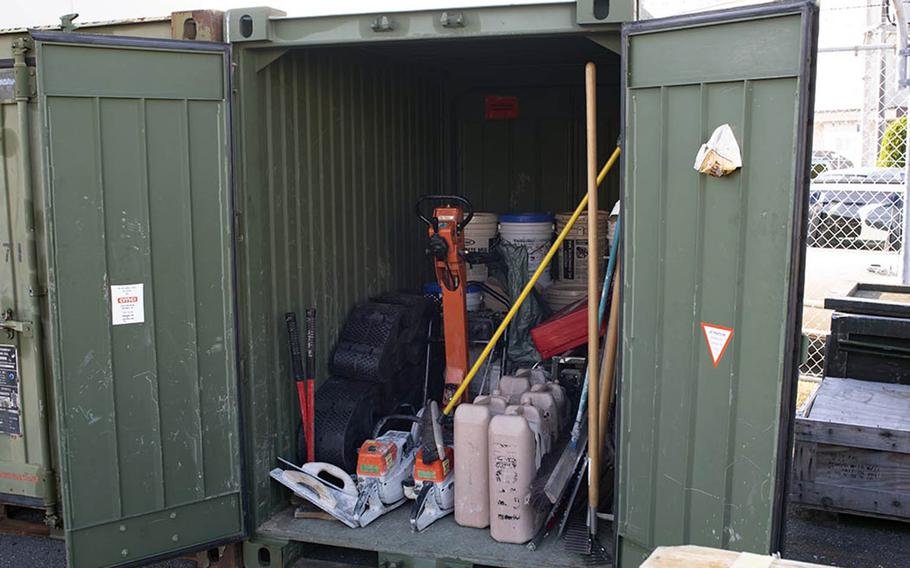 In other words, it did not fit the mission assigned Marine Wing Support Squadron 171 to repair runways damaged by missile strikes or aerial bombardments, often unimproved runways used by Marine aviators in places close to the fight.

To move all that new equipment would take at least one C-17 Globemaster, or multiple C-130 Hercules airlifters, the Marines’ workhouse. That just would not do.

So Cullen, a Mustang, meaning he’s a prior enlisted Marine, figured out how to break down all that gear, including a 20-foot concrete mixing trailer, and repack it so it fit into a single C-130. His squadron commander, Lt. Col. Jerry Godfrey, took note of his accomplishment.

“We are excited about 1st Lt. Cullen’s innovative ideas regarding employment of our airfield damage repair kits,” Godfrey wrote Dec. 4 in an email to Stars and Stripes. “His forward thinking and creativity will allow us to navigate the EABO environment more efficiently in the future.”

EABO, for Expeditionary Advanced Base Operations, is a relatively new doctrine in the Marine Corps, one created to meet the challenge presented by an expanding China on land and at sea. The concept entails, among other things, distributing bases in austere environments within range of an adversary’s weaponry and positioning U.S. weapons like anti-ship cruise missiles and F-35B Lightning II fighters there.

Hence, the need to rapidly and easily deploy a runway repair kit. But the five-container kit is too large to be moved quickly and requires an entire combat engineer platoon, about 20 Marines, to employ.

The full complement of gear is meant for repair and maintenance of semi-permanent airfields, such as those in Iraq and Afghanistan where the U.S. military has been for two decades.

Cullen started to reconfigure the equipment in August. Using additional equipment, he resized the one kit into three: small, medium and large, each designed for particular jobs in specific places.

The small kit fits into one shipping container 8-feet long by 5-feet wide and 7-feet tall. It comes with hand tools, a concrete saw, buckets of quick-setting concrete mix and a generator. With it, five Marines can repair small craters in a runway, making it safe for fighter jets to operate.

The C-130 that delivers the repair team can land on expeditionary or unimproved runways, but jet engines can be damaged by debris sucked through an intake.

The medium kit includes all the equipment from one 20-foot shipping container and a compact track loader with optional attachments, he said.

“This kit allows us to conduct expedient repairs to runway surfaces, specifically crater and spall damage,” Cullen said. Spall damage is small holes or chunks blown out of a runway. “The only thing the heavy kit can do, which this cannot, is permanent repairs.”

The 20-foot shipping container is too large to fit on a C-130 and be unloaded without heavy equipment, so Cullen said the Marines simply unload it and take the individual supplies and equipment aboard a C-130.

The medium kit includes reinforced fiberglass panels, which can quickly cover up bomb craters after they have been refilled with rubble and compacted, Cullen said. When the panels are bolted to the cement, they prevent debris from damaging fighter jets like the F-35B Lighting II or F-18 Hornet that are flown by Marine Aircraft Group 12, the parent unit of Cullen’s platoon.

The medium-sized kit comes with rapid-fill concrete, a variety of hand tools, concrete saws and a generator. The equipment lacks the glamour of a fifth-generation fighter and the work is down to earth, but the mission is an essential part of Marine air, said the operations officer at Marine Wing Support Squadron 171.

“Our ability to ‘go where the planes go’ continues to be the linchpin to support expeditionary operations,” Maj. Milton Rehbein said in an email Nov. 24. “Without aviation ground support, aircraft cannot remain in the fight in a forward deployed environment.”