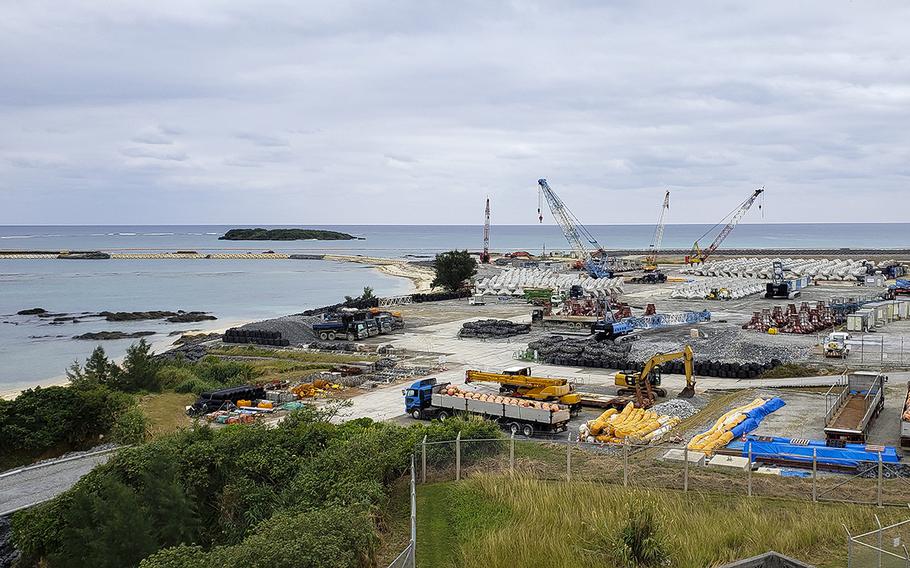 CAMP FOSTER, Okinawa — The Japanese government acknowledged this week that the relocation within Okinawa of Marine Corps Air Station Futenma to Camp Schwab in the rural north has been impeded by further construction delays and cost overruns.

The project, which had been set for completion in 2014 by bilateral agreement, has been pushed to 2030, a spokesman for the Okinawa Defense Bureau told Stars and Stripes on Friday. The overall cost of the new runway into Oura Bay that will one day facilitate the move has skyrocketed from a 2014 estimate of $3.3 billion to $8.7 billion.

The Defense Bureau, which represents Japan’s Defense Ministry on the island, submitted the updated figures to the prefectural government April 21 along with a request to change the already approved and ongoing project, the spokesman said. The prefecture has up to 223 days to respond.

“We estimate the construction will be finished nine years and three months from the time the Okinawa governor approves the request,” the spokesman said.

Should Gov. Denny Tamaki, who has been adamantly opposed to the project, deny the request, the case will be headed back to the courts, the spokesman said. Estimates for cost and completion could also go up even further.

The relocation is being funded by the government of Japan.

“By law, when a request to modify the construction has been submitted to the prefecture, we must examine the request precisely and determine if the request is reasonable to approve or not,” Tamaki said in a statement in April.

Marine officials on Okinawa told Stars and Stripes by email Friday afternoon that the subject matter expert for the relocation was not available to comment.

Construction of the Schwab runway has been on hold since April 17 when a civilian security guard tested positive for coronavirus. A date to resume the work has not been set.

The project dates to 1995 when two Marines and a Navy corpsman kidnapped and raped a 12-year-old girl. During the mass protests that followed, Ginowan residents called for relocation of Futenma’s air operations.

Schwab was chosen in 1997 and a plan was unveiled in 2006. Since then, costs and completion dates have ballooned.