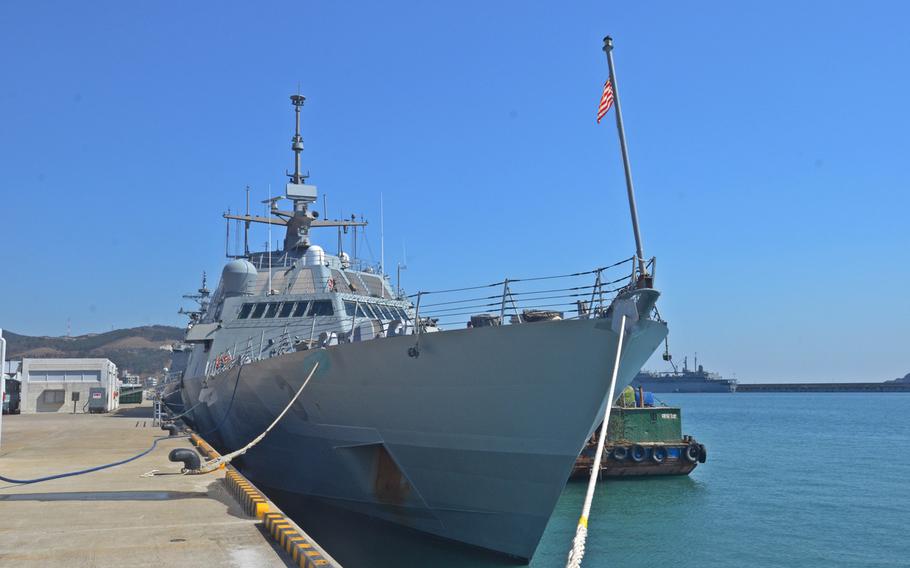 Buy Photo
The USS Fort Worth remains in port Saturday in Busan, after finishing its part of Foal Eagle, a bilateral annual exercise conducted with South Korea. ( Erik Slavin/Stars and Stripes)

Buy Photo
The USS Fort Worth remains in port Saturday in Busan, after finishing its part of Foal Eagle, a bilateral annual exercise conducted with South Korea. ( Erik Slavin/Stars and Stripes) 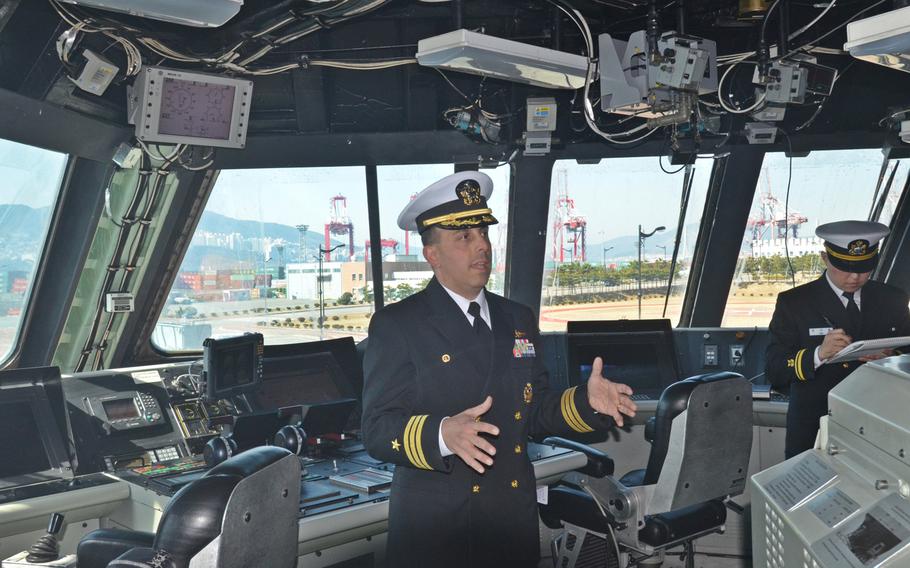 Buy Photo
Cmdr. Matt Kawas, commanding officer of the littoral combat ship USS Fort Worth, speaks about the the ship's capabilities while in Busan on Saturday. ( Erik Slavin/Stars and Stripes) 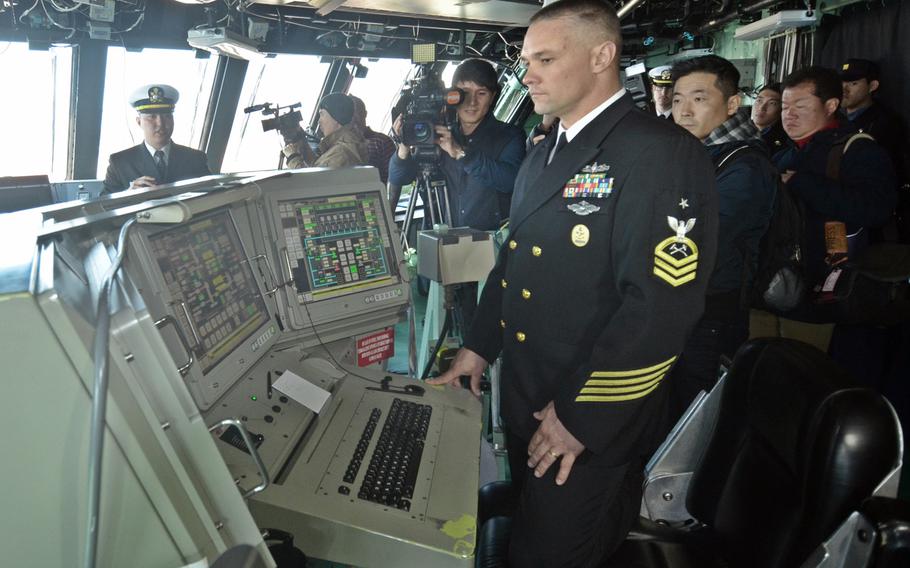 Buy Photo
Command Senior Chief Petty Officer Craig Cole checks the electric and propulsion systems via a touchscreen aboard the bridge of the littoral combat ship USS Fort Worth on Saturday in Busan, South Korea. ( Erik Slavin/Stars and Stripes) 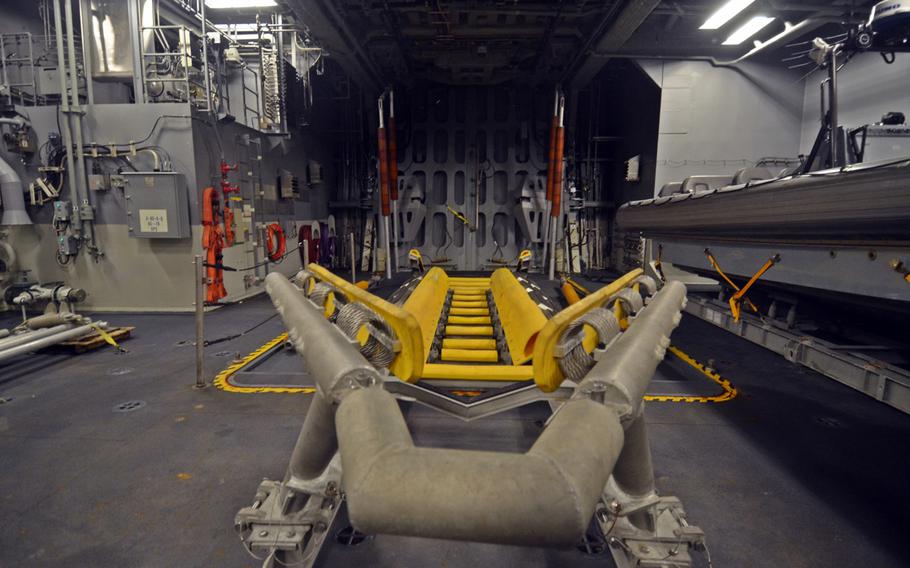 Buy Photo
A rigid-hulled inflatable boat carried by the USS Fort Worth is lifted by a crane, loaded into this bay and then exits the craft through the doors ahead during missions, ship officials said during a tour in Busan, South Korea on Saturday. ( Erik Slavin/Stars and Stripes) 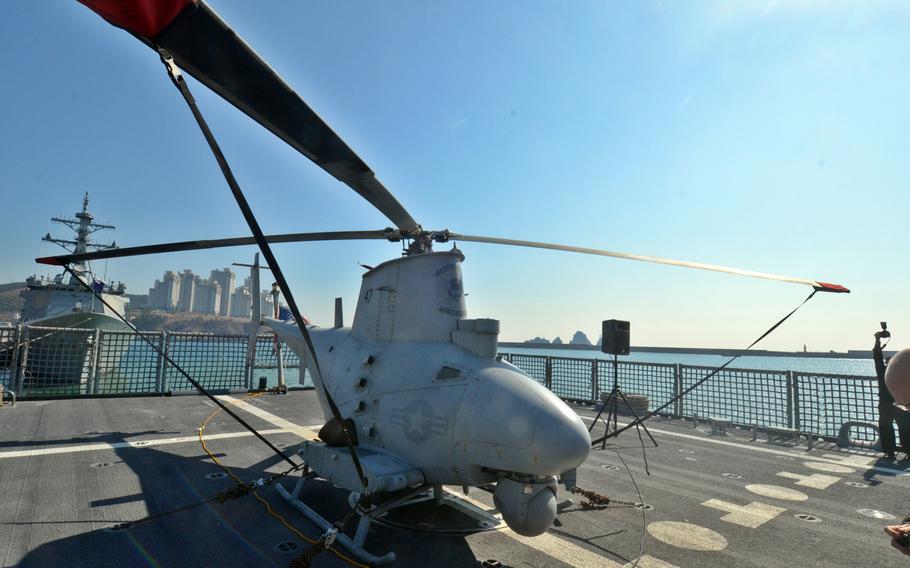 Buy Photo
The MQ-8B Fire Scout unmanned helicopter, shown here aboard the USS Fort Worth on Saturday in Busan, saw action during the Foal Eagle exercise in water off South Korea this past week. ( Erik Slavin/Stars and Stripes) 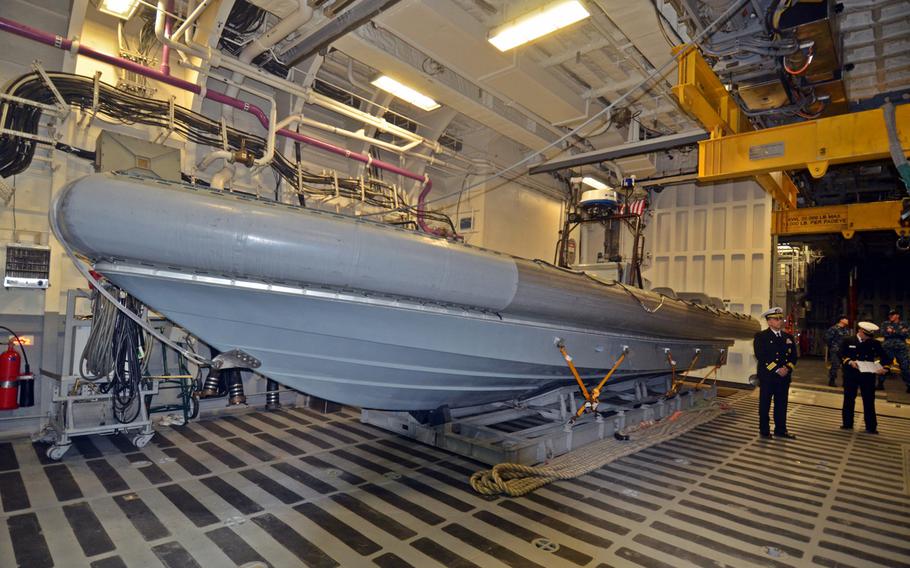 Buy Photo
The littoral combat ship USS Fort Worth carries a rigid-hulled inflatable boat, or RHIB, as part of its surface warfare module. The ship is also meant to swap out the boat for equipment related to mine warfare and anti-submarine missions, but deployment of those modules has been delayed. ( Erik Slavin/Stars and Stripes)

BUSAN, South Korea — The USS Fort Worth’s participation in a bilateral exercise with South Korea this past week begins what the Navy envisions will be regular visits by faster, shallow-draft ships to Northeast Asia.

Until last week’s Foal Eagle exercise started, the Fort Worth had operated primarily in Southeast Asia, where up to four littoral combat ships may be scheduled for long-term rotations by 2018.

The Fort Worth’s participation in the exercise has stirred South Korean media interest, especially in light of North Korea’s Rodong Sinmun newspaper singling the ship out as purported evidence that Foal Eagle is a prelude to an attack. U.S. officials said they notified North Korea about the exercises and its planned dates in advance, and have repeatedly stated that the annual exercise is defense-oriented.

“I don’t see these exercises as provocations,” Rear. Adm. Lisa Franchetti, commander of Naval Forces Korea, said while aboard the Fort Worth on Saturday.

North Korea’s claim that the LCS is attack-focused comes despite Fort Worth’s light armament, at least in comparison with the U.S. and South Korean destroyers participating in Foal Eagle. The ships strengths are its maximum speed of more than 45 mph and its ability to move into shallow coastal waters that would ground larger ships, Navy officials said.

The service plans on building up to 16 Freedom-class ships, including the Fort Worth, and another 16 trimaran-hulled Independence-class ships, though a few among each class may receive modifications.

Another 20 “light frigates” are planned based on the LCS frame, but with more weapons and bulk to address congressional and Pentagon concerns about not having enough ships in the fleet built for high-intensity conflict.

By 2028, LCS variants would comprise about one-sixth of the fleet under the Navy’s present shipbuilding plan.

Franchetti and commanding officer Cmdr. Matt Kawas each said the Fort Worth performed well in South Korea’s coastal waters, though they declined to discuss exercise specifics per Navy policy.

“We’re coming to learn what this ship is fully capable of,” Kawas said.

The ship rotates three crews of about 50 sailors during its 16-month deployment; sailors specific to the ship’s mission add about 50 more personnel.

The drone has become the go-to craft for surveillance-only missions, said Lt. Cmdr. Ted Hill, the aviation officer in charge.

“It’s less maintenance, it’s less taxing on the crews and I have the ability to fly it longer in the day,” Hill said. “But there are always going to be reasons and opportunities to fly the manned helicopter.”

The Fort Worth houses an armed, rigid-hulled boat in a bay, as part of its surface warfare package. The ship’s armament is also designed to deter “swarm attacks” by coastal craft.

However, Fort Worth’s potential capabilities — along with those of three other LCS now in service —are constrained by problems with two other planned roles.

The ship is designed to swap the surface warfare, rigid-hulled boat out with anti-submarine or mine warfare modules, each of which include specialized equipment.

The original anti-submarine package failed to improve on older ships and is being redesigned, according to a 2014 General Accountability Office report.

The mine-countermeasure module continues to be crippled by “low reliability” and maintenance difficulties, according to a January report from the Pentagon’s director of Operational Test and Evaluation office.

The mine package is currently being tested by the USS Independence, the second ship of the LCS class, Navy officials said Saturday.