Leaner, shorter RIMPAC 2020 is all about warfighting and coronavirus safeguards 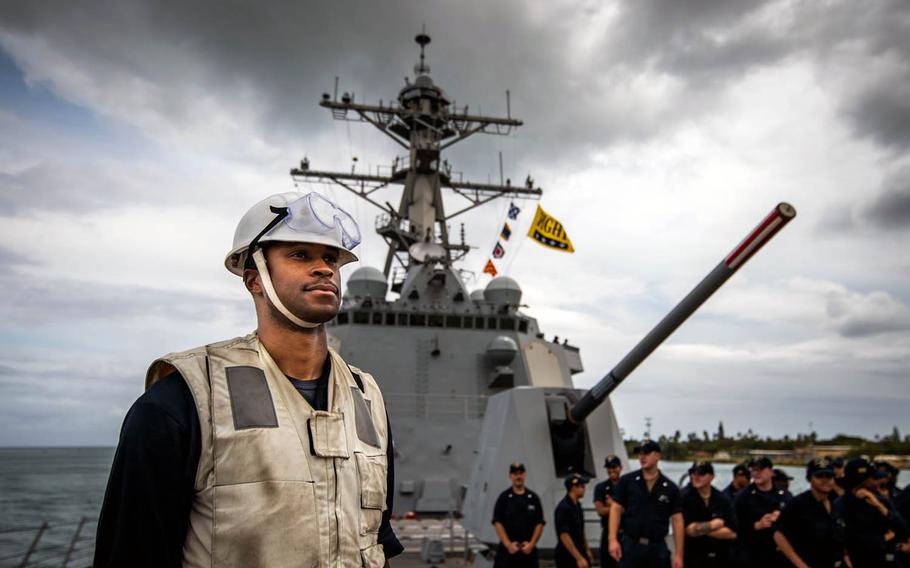 Sailors stand on deck as the guided-missile destroyer USS Dewey arrives at Pearl Harbor, Hawaii, for the Rim of the Pacific exercise in 2018. The ship is one of eight U.S. vessels participating in RIMPAC 2020, which runs through Aug. 31. (U.S. Navy)

Sailors stand on deck as the guided-missile destroyer USS Dewey arrives at Pearl Harbor, Hawaii, for the Rim of the Pacific exercise in 2018. The ship is one of eight U.S. vessels participating in RIMPAC 2020, which runs through Aug. 31. (U.S. Navy) Vice Adm. Scott Conn, commander of U.S. Navy 3rd Fleet, announces the start of the Rim of the Pacific exercise in Hawaii in a video released Aug. 17, 2020. (U.S. Navy)

FORT SHAFTER, Hawaii — The Rim of the Pacific maritime exercise that began Monday in Hawaii has been dramatically downsized during the coronavirus pandemic, but as a result it will be laser focused on warfighting.

“This year we will focus solely on warfighting in the maritime domain, to include anti-surface warfare, anti-submarine warfare and maritime interdiction operations, as well as some robust live-fire events,” said Vice Adm. Scott Conn, commander of U.S. Navy 3rd Fleet, in a video message released Monday in lieu of the pierside news conference normally held on opening day of the biennial exercise.

Navy ships and personnel from nine nations are joining the United States for the two-week exercise, which will be held entirely at sea in waters near the Hawaiian Islands. Participants include Australia, Brunei, Canada, France, Japan, South Korea, New Zealand, the Philippines and Singapore.

Twenty-two ships and about 5,300 personnel are involved in the exercise, which will be held entirely at sea due to concerns about the spread of the virus.

That is a substantial decrease from the 26 nations, 47 surface ships and five submarines that joined the drills two years ago.

Japan and South Korea both have a pair of destroyers participating.

Notably absent from participation are any countries to the south of the U.S. Chile, Colombia, Mexico and Peru, all of which attended RIMPAC in 2018, are not participating.

After joining the drills for the first time two years ago to great fanfare, Vietnam is also a no-show.

Conn spent the first half of his six-minute statement explaining the measures taken to combat the spread of the virus.

“I want to say up front that everything we are doing for RIMPAC had been carefully and deliberately planned to ensure everyone’s safety,” Conn said. “This construct was developed to ensure the safety of the citizens of Hawaii and all the sailors embarked on the ships participating this year.”

Hawaii has experienced an upsurge in new daily coronavirus cases since mid-July, which has led state and local governments to partially reinstitute bans on public gatherings. The state has had 5,215 confirmed cases of the virus and 40 deaths as of Monday, according to the Hawaii Department of Health.

Some Hawaiians had earlier this year urged Gov. David Ige to request the Navy cancel the exercise, which normally brings thousands of visitors and millions of extra dollars to Oahu’s hotels, restaurants and bars.

Conn briefly explained why the Navy went ahead with a shorter, smaller exercise.

“RIMPAC represents a unique opportunity to strengthen relationships and build trust,” Conn said. The time to forge key relationships and the capability of working together is not in the time of crisis, whether those are manmade or natural disasters, he said.

“We want to have those personal relationships and trust already well established,” he said. “That is why we made the calculated decision to proceed with RIMPAC 2020 — to demonstrate to ourselves and the world that our navies and our nations have the resolve to come together in times of crisis.”

Before the pandemic hit this spring, the Navy had expected 30 countries, 50 ships and submarines and 200 aircraft to participate in RIMPAC 2020.

Twenty-six nations and 25,000 personnel participated in 2018, the largest group to ever attend the exercise since it began in 1971.