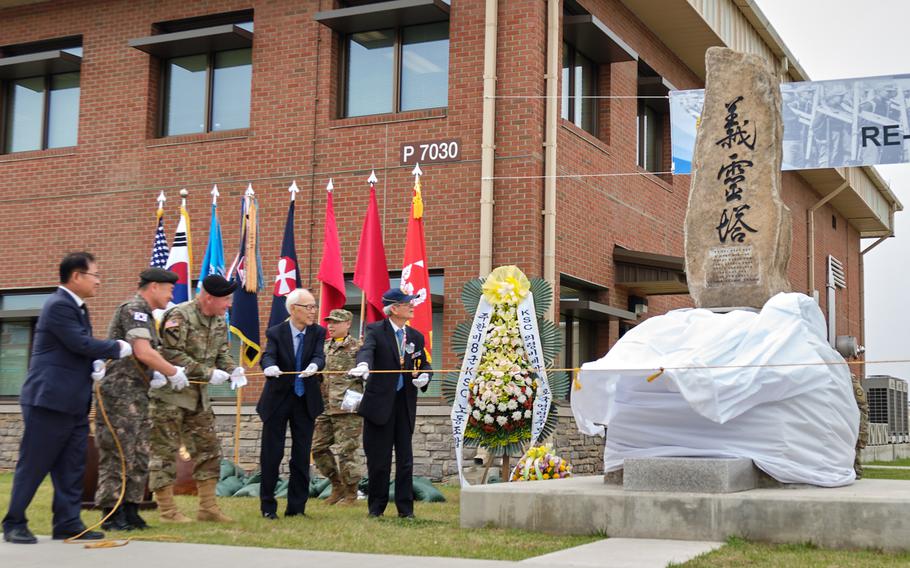 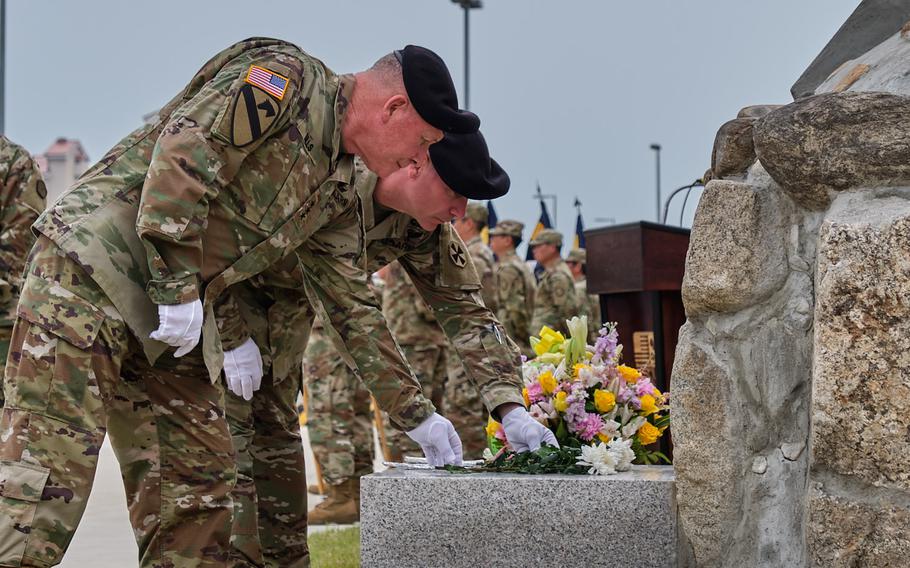 Korean Service Corps paramilitary members pose beside a tribute to fallen KSC members during a rededication ceremony for the monument at Camp Humphreys, South Korea, June 9, 2019. (Matthew Keeler/Stars and Stripes)

In 1985, the monument was established on Camp Kim, a small base just outside the gates of Yongsan Garrison in Seoul. Camp Kim closed in 2018 and was converted into a center for visitors to learn about base history at the new Yongsan Park Gallery.

“This monument was a labor of love by the KSC to honor the sacrifices of their fellow members,” Bills said. “The monument was not purchased or donated; it took over seven years of dedicated service to complete. The stone itself was mined from Baegun Mountain to symbolize the loss of KSC lives at that very mountain during the Chinese spring offensive of 1951.”

The mountain in Pocheon was the scene of a bloody battle where many corps members were wounded or lost their lives while hauling ammunition to troops and evacuating casualties.”

Under the command of Lt. Col. John Cooper, the Korean Service Corps is the largest battalion in the U.S. Army with 2,188 mission-essential Korean nationals whose ranks, if given the order, can swell to more than 21,000 personnel to provide logistical support to forces throughout the peninsula.

Members of the paramilitary unit operate under the “Fight Tonight” umbrella, a phrase frequently heard from command teams to instill discipline and readiness in servicemembers operating in the fragile region. All corps members are issued a set of chemical, biological, radiological and nuclear protective equipment, which includes an M50 protective mask.

Corps members regularly train according to Army Warrior Tasks standards, including first aid, Cooper said. Each of the battalion’s 18 companies also strive to maintain 20 percent of its ranks as certified combat lifesavers.

That training proved useful in June 2013, when service corps mechanics Yi Won Chik and Kwak Myong Chin heard a soldier, Pfc. Kimberly Garland, collapse near a restroom at Camp Stanley. Both men quickly reacted and Kwak performed CPR after determining that Garland was not breathing, while Yi ordered a Korean soldier with the U.S. Army to call 911.

Yi credited his annual CPR training for his knowing how to react and handle the situation.

“Many people don’t know what a KSC is or does,” Cooper said during his speech. “Korean Service Corps contributions aren’t taught in schools. To the public, KSCs faded into history. But not anymore, today we honor the unsung heroes of the Korean War because we owe them.

“We must never forget the contributions of the Korean Service Corps,” he added.