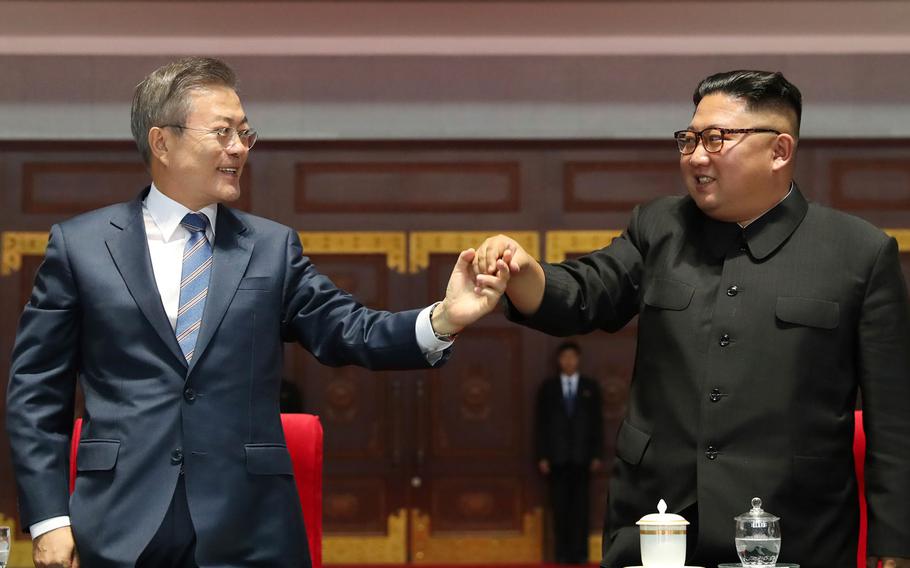 But a far-reaching military agreement signed during his summit with North Korean leader Kim Jong Un last week outlines ambitious steps to reduce tensions along the heavily fortified border, which has bisected the peninsula since the end of the three-year Korean War.

While his efforts to revive nuclear talks between Pyongyang and Washington got the most attention, Moon called the military accord “the most important” result for relations between the two countries.

“This development would go beyond ending the Korean War that has remained unfinished since the signing of the armistice agreement, eradicating any possibility of war between the two Koreas in the future,” he said during a news conference after returning to Seoul on Thursday.

Conservatives in South Korea and other critics have expressed concern that Moon’s administration is letting down its guard too soon considering the North’s track record of reneging on past agreements.

Thorough reviewIt’s also unclear how the military measures could affect the armistice agreement, which is enforced by the UNC under the command of Army Gen. Vincent Brooks, who also leads U.S. Forces Korea.

The UNC, which likely would need to sign off on key points, said it would “thoroughly review” the agreement “to ensure compliance with the Armistice Agreement.”

The command will cooperate with South Korea’s defense ministry and “as appropriate” with the North Korean military “to work through the details of the agreement,” according to a UNC official who spoke on condition of anonymity because of the sensitivity of the issue.

The UNC has made a number of exceptions to facilitate diplomatic efforts that gained momentum this year, including allowing North Korean officials and athletes to travel across the DMZ for the Winter Olympics.

But the command blocked Korean plans for a joint railway survey in August, citing a procedural error.

Experts said the agreement — the result of extensive bilateral talks in the run-up to the Sept. 18-20 summit in Pyongyang — would help build trust and would lower the possibility of accidental conflict.

He said it would be hard for the U.S. to object to the measures, calling it “clever maneuvering on Moon’s part.”

“If they said, ‘No,’ then it would just be enhancing Kim’s arguments that the U.S. isn’t negotiating in good faith,” he said in a telephone interview. “And it would also create problems with the alliance with South Korea.”

Easing tensionsThe deal appeared designed to stay within parameters that would be acceptable to the U.S., which maintains some 28,500 troops in the South.

It was focused on conventional forces, an important issue for Moon because North Korea has more than 1 million soldiers and thousands of artillery batteries and rockets poised to target Seoul, some 35 miles to the south.

North Korean leaders have threatened to turn the South Korean capital into a “sea of fire” in the past.

But military officials have said they’re just as worried that misunderstandings or human error could tip the peninsula into crisis.

“I think the only way you really get to nuclear use on the peninsula is not the North surprise-attacking anyone or the U.S. surprise attacking the North, it’s more from something … that has the risk of spiraling out of control,” Gomez said.

They also will designate no-fly zones for helicopters, drones and hot-air balloons, which are used to deliver propaganda leaflets, above the Military Demarcation Line that runs through the Demilitarized Zone.

“It stops short of addressing the annual combined exercises by the US that so offend the North Koreans,” Joshua Pollack, of the Middlebury Institute of International Studies in California, wrote in a tweet.

“Seoul continues to ‘color inside the lines’ of alliance solidarity in its dealings with the North,” he said.

President Donald Trump suspended the joint war games after the Singapore summit but warned he could “instantly restart” them if progress isn’t made toward denuclearization.

The Koreas agreed to withdraw 11 guard posts from each side in the Demilitarized Zone by the end of the year.

DMZ blueprintThe rivals also announced a blueprint to transform the DMZ, a 2.5-mile-wide no man’s land that is lined with barbed wire and land mines, into a peace zone, as agreed during the first Moon-Kim summit on April 27.

That included plans to remove all mines and to disarm troops in the Joint Security Area in the truce village of Panmunjom. The agreement said a trilateral consultative body including the two Koreas and the UNC would be established to oversee the process.

“If implemented, these measures will reduce tensions, and will also make incidents at the DMZ significantly less likely — even though it will hardly prevent either side from staging a clash when/if it is seen as politically expedient,” North Korea expert Andrei Lankov wrote in a commentary for NK News.

“But given that many earlier incidents were seemingly provoked by human error, these measures are likely to save the lives of soldiers from both sides,” he said.