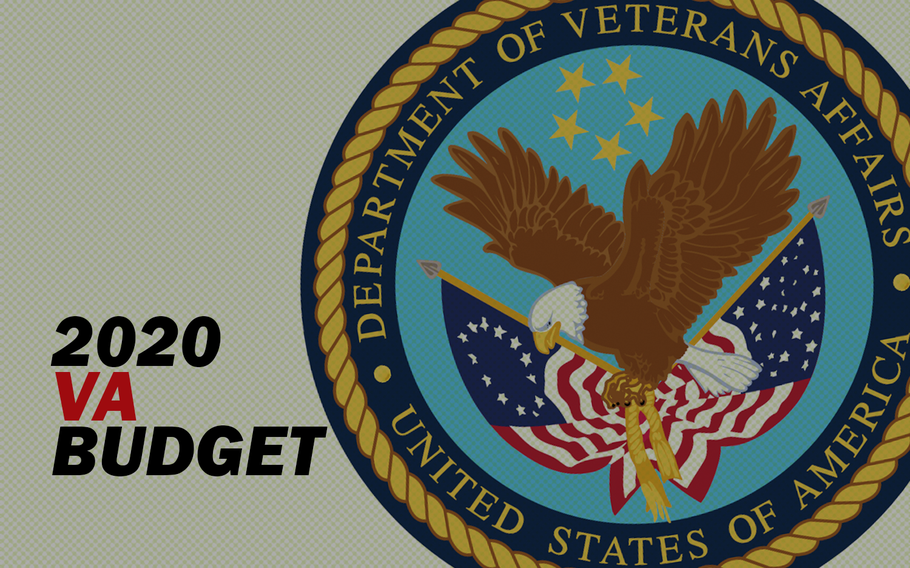 President Donald Trump's request for the Department of Veterans Affairs budget is $220 billion — up 9.5 percent from fiscal 2019. ()

As part of Trump’s budget plan, released Monday, the president requested $220 billion for the VA – up 9.5 percent from fiscal year 2019, when the agency’s budget surpassed $200 billion for the first time. The Veterans of Foreign Wars, Disabled American Veterans and Paralyzed Veterans of America published a statement late Tuesday that warned the budget isn’t sufficient, given the multiple, expensive initiatives underway at the agency.

The plan doesn’t include enough funding for medical services, community care, infrastructure, medical research or the support program for veteran caregivers, they wrote.

“Unless Congress acts to substantially increase VA’s funding for FY 2020, veterans will be forced to wait longer for care, whether they seek care at VA or in the community, leaving unfulfilled the promises made to veterans in the VA Mission Act,” the groups wrote.

For more than 30 years, the VFW, DAV and PVA have compiled and sent an annual report of VA budget and policy recommendations, known as the Independent Budget, to lawmakers and the presidential administration.

In their recommendations this year, they suggested a community care budget of more than $18 billion, which they think is necessary as the agency allows veterans more access to private doctors. Trump’s budget proposal calls for $15.3 billion.

“There appears to be a significant shortfall for VA community care programs,” the groups wrote.

They also predicted a shortfall for medical care provided in VA hospitals and clinics. Trump’s proposal includes $51.4 billion, while they asked for $56.1 billion.

The groups are also concerned about the part of the VA Mission Act that extends caregiver benefits to veterans injured before the 9/11 terrorist attacks.

Under the new law, caregiver benefits are supposed to become available this year to veterans injured before May 7, 1975. However, a senior VA official said Monday that the information technology systems necessary for the rollout wouldn’t be ready until 2020.

“For thousands of World War II, Korean and Vietnam veterans and caregivers who were relying on this life-changing support, VA’s impending failure to deploy and certify required IT systems is simply unacceptable,” the groups wrote.

In addition, the groups think a lack of funding was proposed for VA research and infrastructure, describing the budget plan as “dangerous” for those areas.

Trump’s proposal includes $762 million for research, $17 million less than the current fiscal year. A VA official attributed the decrease to a one-time increase in 2019 for a research effort with the Department of Energy. The VFW, DAV and PVA had suggested a $840 million budget for research.

The groups are opposing efforts by Trump’s administration to cut costs at the VA.

Part of the budget plan calls for rounding down cost-of-living adjustments to all veterans who receive disability compensation. The practice was standard until 2013, and reinstating it would save $36 million in fiscal year 2020, according to budget estimates.

A section described as “standardize and enhance VA compensation and pension benefit programs” is estimated to save $234 million for the agency in fiscal year 2020, if approved. A senior VA official said Monday that the action would “clarify the evidentiary standards” that are necessary for veterans to receive a compensation and pension exam. Those exams are part of the process for veterans to apply for disability compensation.

The VFW, DAV and PVA argued Tuesday that the change would make it more difficult for veterans to receive the exams.

Trump’s overall budget plan for 2020 is expected to face significant challenge in Congress, which began discussing the proposal this week. The VA was one of the few domestic agencies that the president designated for an increase in spending.

He suggested cuts for other agencies, such as the Environmental Protection Agency and departments of State, Education, Transportation, Agriculture and Interior.