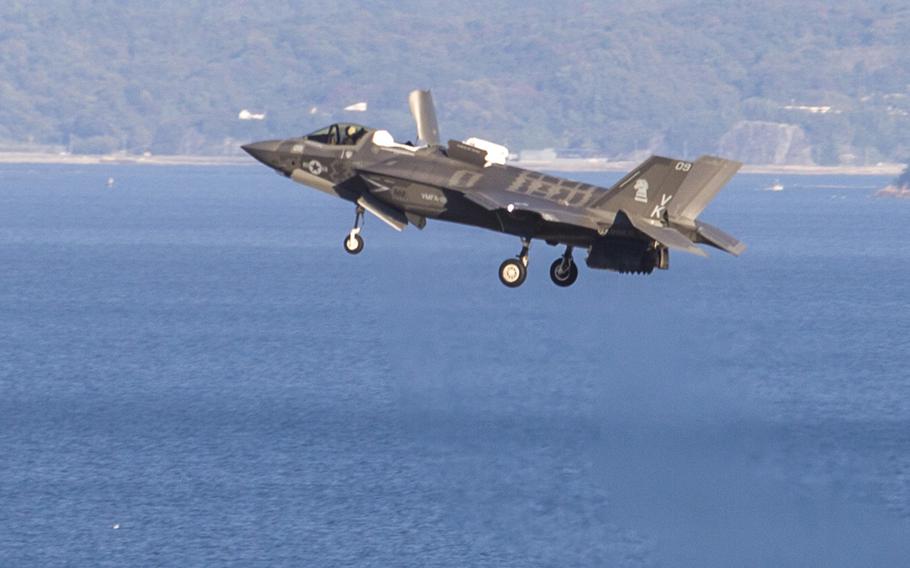 MARINE CORPS AIR STATION IWAKUNI, Japan — The Hiroshima High Court awarded nearly $6.8 million on Friday to residents living near MCAS Iwakuni as compensation for aircraft noise, a higher amount than a lower court allowed in 2015, according to Japanese government officials.

The award — the latest in a 10-year-old lawsuit — benefits 653 residents living near the air base who say they suffered from the noise.

A variety of jets are flown out of the base. They include the Marine Corps’ fifth-generation stealth fighter, the F-35B Lightning II, and the F/A 18 Hornet and the Navy’s F/A-18 Super Hornet. The number of aircraft at Iwakuni increased as the U.S. Navy transferred its Carrier Air Wing 5 from Naval Air Facility Atsugi, south of Tokyo, a process that concluded last year.

According to a 2014 noise study by the Department of Defense, both aircraft types can produce about 145 decibels. By comparison, a gas-powered lawn mower 3 feet away produces about 100 decibels; a 747-400 commercial airliner on takeoff produces about 110 decibels heard 2 miles away, according to the Federal Aviation Administration.

The Hiroshima High Court added about $1.6 million on top of the ruling from four years ago, officials said. The additional compensation covers the period between the lower court’s decision and the high court ruling on Friday, said Junko Otsuki, a spokeswoman for the plaintiffs.

The Japanese government said it will carefully review the court’s decision and decide whether it will appeal to the nation’s supreme court, Chugoku-Shikoku Defense Bureau Director General Haruo Morita said in a statement.

“The Ministry of Defense will continue to consider the aircraft noise impact on the residents and will ask the U.S. side to do the same,” Morita said.

Judges also rejected a request to ban flight operations by U.S. and Japan Maritime Self-Defense Force aircraft between 8 p.m. and 8 a.m. at the air base, she said.

“We are fully committed to our Alliance role, and the entirety of our training directly supports our obligations under the Treaty of Mutual Cooperation and Security,” Maj. Joshua Diddams, a spokesman for MCAS Iwakuni, told Stars and Stripes in an email Monday.

“There are a number of measures we take to mitigate the impact on those surrounding the air station,” he wrote. “Making every effort to honor our normal airfield hours; limiting flights during especially noise sensitive events near our flight operation areas; conducting straight-in full-stop measures when appropriate; and flying above minimum required altitudes are all examples of everyday efforts we make to mitigate the impact of our training.”

The residents filed the first lawsuit over aircraft noise at MCAS Iwakuni in 2009. They sought about $5.4 million in compensation, saying their lives and health had been affected by noise from the nearby airfield.

The lawsuit demanded compensation for past and future suffering, a ban on flight operations at night and early morning and suspension of the Navy’s relocation of Carrier Air Wing 5 from Atsugi to Iwakuni.

The air wing supports the USS Ronald Reagan, which is homeported at Yokosuka Naval Base. MCAS Iwakuni is also home to Marine Air Group 12and JMSDF Fleet Wing 31.