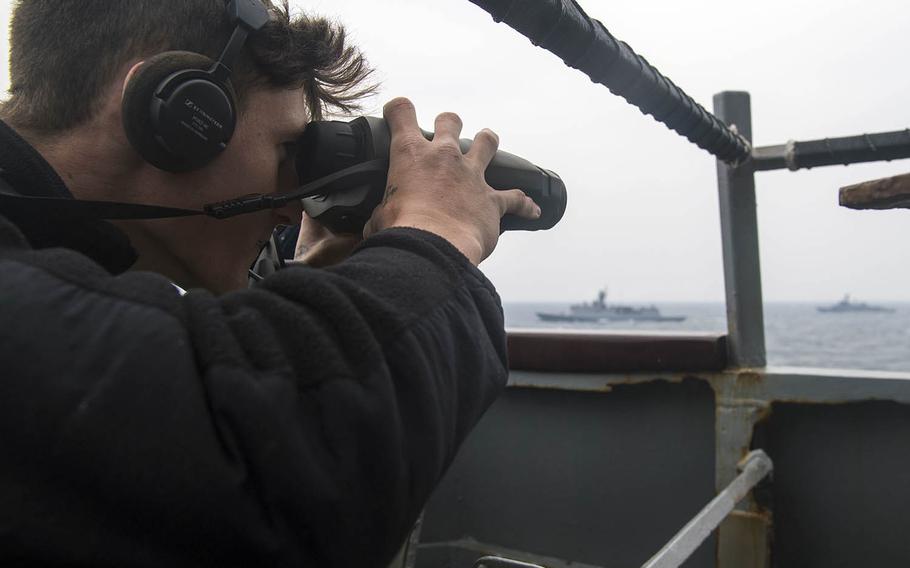 SEOUL, South Korea — U.S. and South Korean officials vowed not to scale back joint war games set to begin on April 1 despite plans for back-to-back summits between the allies and North Korea.

But the messaging and a shortened timetable suggest the annual drills will be kept low-key to avoid provoking the North Koreans as delicate diplomacy is underway.

Washington and Seoul agreed to postpone the exercises known as Foal Eagle and Key Resolve to ease tensions during the Feb. 9-25 Olympics and March 9-18 Paralympics, which were held on the divided peninsula.

Defense Secretary Jim Mattis and his South Korean counterpart, Song Young-moo, said Tuesday that the drills are expected to resume on April 1 “at a scale similar to that of previous years.”

The decision, which had been widely expected, was announced in a brief statement that contained few details.

The U.S.-led United Nations Command notified the North Korean army at the Joint Security Area in the Demilitarized Zone at 8:30 a.m., it said.

The computer-simulated Key Resolve will involve about 12,200 Americans and 10,000 South Korean military personnel, he said.

The Yonhap News Agency quoted an informed source as saying it may be pushed back to mid-April to avoid coinciding with a U.S.-North Korea summit expected to be held by May.

The allies stressed that the exercises will include all service branches and won’t be scaled back in scope or duration.

But South Korea’s military later said Foal Eagle, the most dramatic of the simultaneous drills, would last a month instead of the two months it took last year when tensions were spiking over the North’s nuclear weapons program.

The exercises have long been a flashpoint for tensions on the divided peninsula because they always infuriate Pyongyang, which considers them a rehearsal for an invasion. The North has frequently responded with fiery rhetoric and provocations, including firing four missiles toward Japan last year.

South Korean envoys who met with North Korean leader Kim Jong Un said he understood the exercises would be held as planned this year. But Pyongyang has not made any direct comments on the issue.

Logan reiterated the military’s stance that the exercises are defensive in nature and necessary to maintain readiness. No details about the scenarios or other details will be released “to avoid compromising exercise objectives,” he said.

“These routine training exercises are not conducted in response to any [North Korean] provocations or the current political situation on the peninsula,” he said.

As in the past, the exercises will be monitored by the Neutral Nations Supervisory Commission to ensure compliance with the armistice agreement that ended the 1950-53 Korean War in lieu of a peace treaty. About 28,500 U.S. servicemembers are stationed in South Korea.

North Korea joined the Winter Games and engaged in rare talks with Seoul that led to an agreement for Kim Jong Un and South Korean President Moon Jae-in to meet in late April.

A South Korean delegation later traveled to Pyongyang and returned with an offer from Kim to meet with President Donald Trump. Trump surprised many by saying he would meet with Kim by May.

The communist state has been largely silent since the flurry of breakthroughs, prompting skepticism about its sincerity.

North Korean officials have been dispatched to Sweden and Finland for meetings that may help lay the groundwork for what would be the first-ever U.S.-North Korean summit.gamel.kim@stripes.com Twitter: @kimgamel