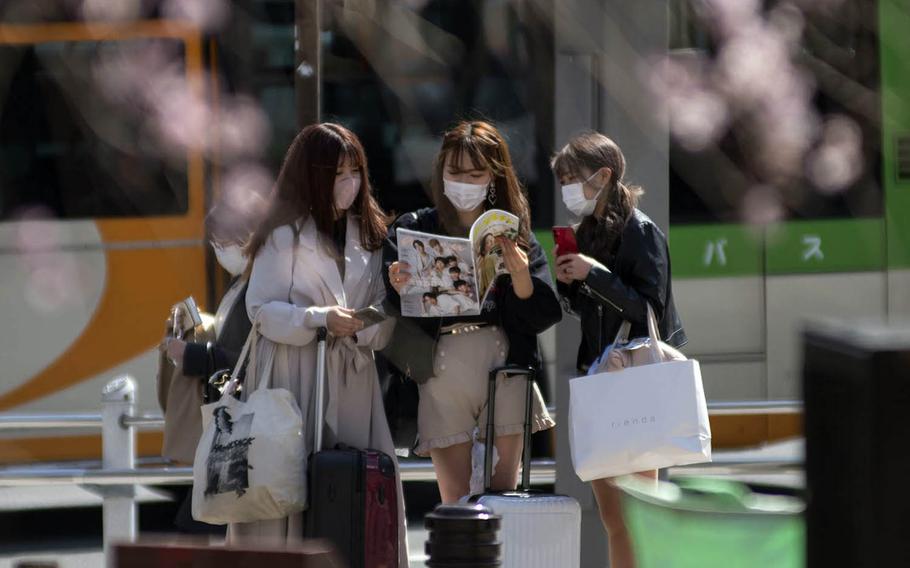 Suga said the 2 ½-month-old emergency would end, but the public should remain cautious and avoid activities likely to spread the virus, according to The Japan Times.

Meanwhile, a pair of U.S. military bases in Japan reported five new infections as of 6 p.m. Thursday, two at Naval Air Facility Atsugi, 26 miles southeast of central Tokyo, and three at Kadena Air Base on Okinawa.

A panel of health experts that advises the government on the coronavirus recommended lifting the emergency first declared Jan. 7 and extended twice as case numbers peaked and ebbed and hospitalizations increased, The Mainchi newspaper reported Thursday. The emergency at one stage covered 11 prefectures, mostly on Honshu, the largest of the four main islands and where Japan’s largest cities are located. Only Tokyo, Kanagawa, Saitama and Chiba remain under the declaration.

Travel restrictions are easing at U.S. installation in Japan, but all or part of Tokyo is still off-limits to U.S. military personnel – uniformed and civilian – except for work or essential services. Only Yokota Air Base in western Tokyo permits its population to visit the city center. Some activities and businesses, such as bars and large indoor gatherings, are still prohibited.

The government’s emergency measures are largely voluntary. Employers encourage telework and commuters are expected to reduce their travel on mass transit. Businesses, especially restaurants, are incentivized to close between 8 p.m. and 5 p.m.

Tokyo on Thursday reported another 323 people tested positive for the coronavirus, according to public broadcaster NHK. Daily counts in the city of 14 million the past month have typically hovered between 220 and 350, according to metro government data. On Wednesday, new infections reached 409, the highest one-day count since Feb. 18.

NAF Atsugi reported one person tested positive before exiting a mandatory quarantine for travelers entering the country. The second person acquired the virus from a previously infected individual, according to a base Facebook post.

At Kadena, one person tested positive before exiting quarantine, according to a base Facebook post. The other two new patients became ill with COVID-19 symptoms, self-isolated and tested positive for the virus. Public health authorities quarantined an unspecified number of close contacts.

In South Korea, the commander of Camp Humphreys, Col. Michael Tremblay, on Thursday closed base convenience stores, a post office and other facilities to accommodate contact tracing after someone tested positive there earlier in the week, he said in a Facebook Live video.

South Korea reported 445 new coronavirus cases on Wednesday, including 155 in Gyeonggi province, where Humphreys and Osan Air Base are located, and 124 in Seoul, according to the Korea Disease Control and Prevention Agency.

The Korean military reported three new cases of COVID-19 for a pandemic total of 632, Moon said.